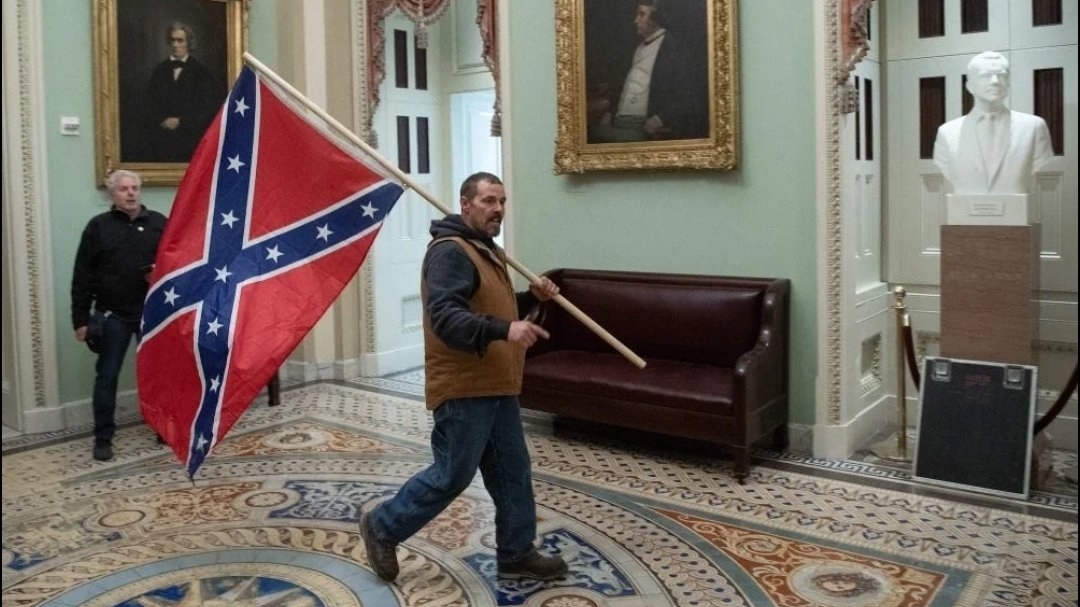 Widely shared images of a white man carrying a Confederate flag across the floor of the U.S. Capitol during last week’s deadly attempted insurrection is a jarring reminder of the treasonous acts that killed more than 750,000 Americans during the Civil War, according to the Southern Poverty Law Center.

“Just as defeated Confederate soldiers were forced to surrender the Civil War and end their inhumane treatment of Black people, the rioter who brazenly carried a Confederate flag into the Capitol has been forced to surrender to federal authorities,” said Lecia Brooks, chief of staff at the Southern Poverty Law Center, in a statement Friday following the arrests of Kevin Seefried, 51, and his 23-year-old son Hunter.

Seefried, the Baltimore man allegedly seen in those photographs carrying the Confederate flag, and his son are charged with entering a restricted building and violent entry and disorderly conduct on Capitol grounds. Hunter is also charged with destroying government property.

“Incited by the President’s disinformation campaign, the rioter’s decision to brazenly roam the halls of Congress clinging to this painful symbol of white supremacy was a jarring display of boundless white privilege,” Brooks’s statement reads. “Despite the revisionist history promoted by enthusiasts, his disgraceful display is proof that the Confederate flag clearly represents hate, not heritage.”

“Over 750,000 American lives were lost because of the Confederacy’s treasonous acts. We cannot allow more blood to be shed for efforts to split our Union. January’s immoral coup attempt is an embarrassment to the United States, and we call on the federal government to prosecute these insurrectionists to the fullest extent of the law.”

An affidavit detailing the charges states that videos taken during the riot show both Seefrieds enter the Capitol building through a broken window, that Hunter helped break, at about 2:13 p.m.

Both men on Jan. 12 voluntarily talked with FBI agents and admitted to their part in the riots, according to court records.

The elder Seefreid told the FBI agent that he traveled to the rally to hear Trump speak and that he and his son joined the march and were “led by an individual with a bull horn.”

There were numerous pro-Trump attendees at the rally and march to the Capitol who had bull horns, according to multiple videos taken that day, but at the front of one of the largest groups of marchers with a bull horn was far-right radio personality Alex Jones, who was walking next to Ali Alexander, organizer of the Stop the Steal movement.

Alexander in three separate videos has said he planned the rally, meant to put pressure on Congress voting inside the Capitol that day, with Rep. Mo Brooks, R-Alabama, and Arizona U.S. Reps. Paul Gosar and Andy Biggs. Alexander is now in hiding, according to The Daily Beast.

Congressman Brooks’s spokesman told APR on Tuesday that Brooks does not remember communicating with Alexander.

Jones and Alexander can be seen leading the march in a video taken and posted to Twitter by freelance journalist Raven Geary.

“This is history happening. We’re not giving into globalists. We’ll never surrender,” Jones yells into his bullhorn as they marched toward the Capitol.