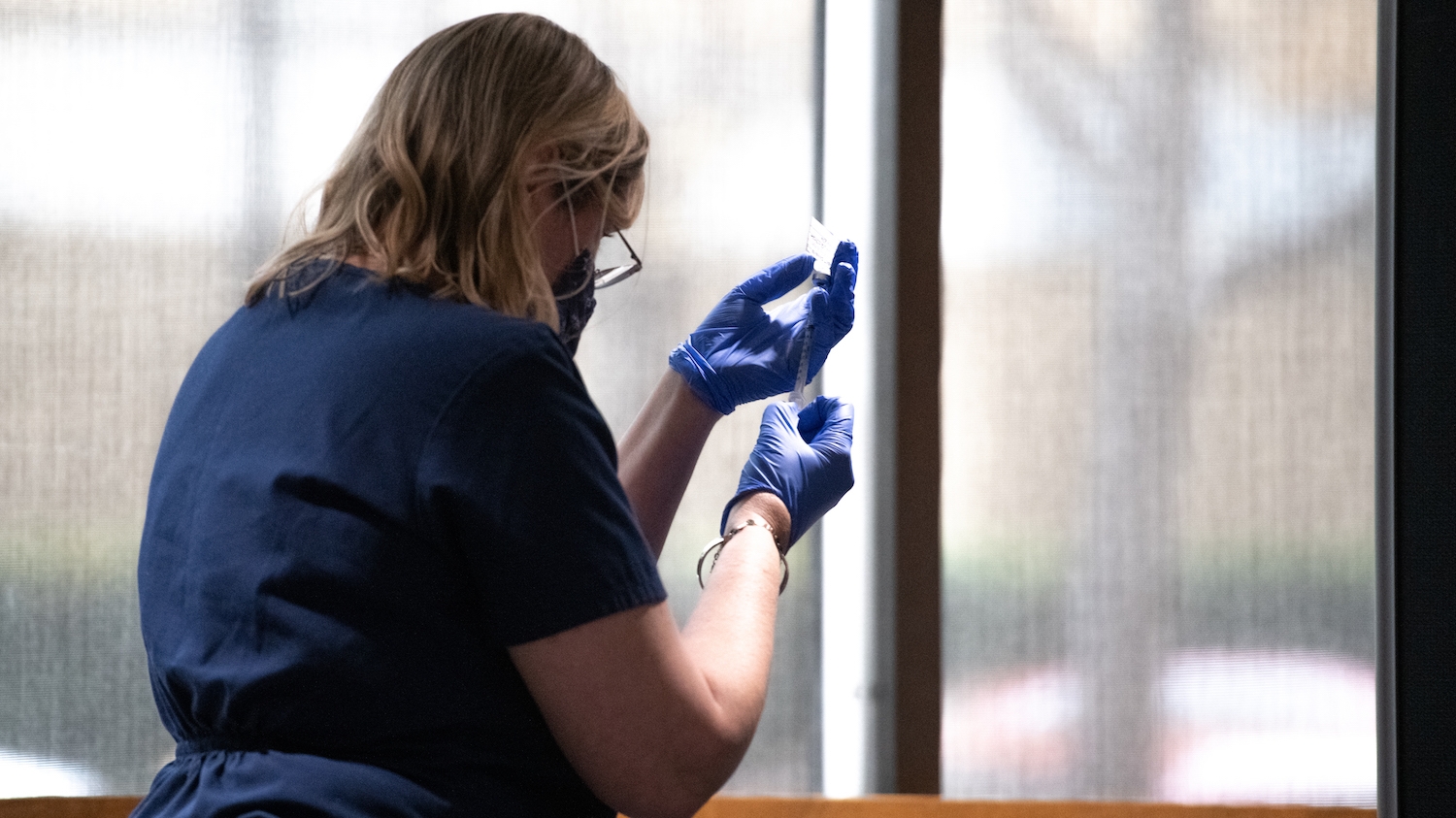 A health care worker at UAB Hospital prepares a dose of the COVID-19 vaccine. (VIA UAB)

That matters because some entities vaccinating in Alabama have failed to meet the federal vaccination reporting requirements. While shipments haven’t yet been disrupted because of the problem, the threat remains if fixes aren’t made, said Dr. Karen Landers, assistant state health officer with the Alabama Department of Public Health, speaking to APR on Monday.

“Entities are trying to do the very best they can administering this vaccine, but this is a bit new to them,” Landers said of some of the clinics and pharmacies currently providing vaccinations.

Even with training provided to those businesses on how to use the state’s Immunization Patient Registry with Integrated Technology system — known as ImmPRINT — which provides the federal government with the state’s vaccination data, problems can arise, Landers said.

“What I think we really want to focus upon is to ensure that every dose of vaccine that is administered is counted,” Landers said. “That is really the biggest problem at the moment.”

After recent news reports noted that, according to the CDC, Alabama was dead last in the nation for vaccinations per 100,000 residents, ADPH released a statement that said the CDC’s numbers didn’t match the state’s, and that was due to a reporting problem from some vaccine providers.

ADPH’s updated COVID-19 vaccination dashboard shows the state had administered 148,685 doses — which include both the first and required second shots of vaccines — and had 231,190 doses still on hand as of Monday morning.

The CDC’s vaccination tracker put Alabama at having administered 100,567 doses as of Friday, which placed the state as seventh from the bottom. (The CDC in a statement said the website wouldn’t be updated on Monday, in observance of Martin Luther King Jr. Day.)

Landers said ADPH’s IT staff have been working into the early morning hours to get those problems corrected, the data properly imputed into the database and additional training for those vaccine providers on how to properly input the information into the ImmPRINT system.

But Alabama’s vaccine rollout isn’t just having trouble when it comes to telling the federal government how many people have been vaccinated. There have been problems getting people scheduled for vaccinations, as well.

From the very first day it went live, ADPH’s vaccination hotline was clearly not up to the task of handling the number of calls it was receiving. More than 1.1 million people calling that first day overloaded the ability to handle the calls, and ADPH issued a statement noting the problem and saying additional staff was being hired to answer those calls.

“The hotline, I will be the first person to say, was very problematic and did not meet the standards that we had expected them to meet,” Landers said, referring to the vendor. “But again, they have corrected a lot of those problems too.”

“You think you’ve staffed for it. You think you’ve trained for it, but again, testing the system and you found out that obviously, it didn’t quite meet the standards that you expected,” Landers said.

ADPH on Jan. 11 announced that an online registration portal was being developed, to help alleviate some of the load on the hotline and allow more people to schedule vaccinations in a more timely manner.

Asked why such an online portal hadn’t been planned and developed months ago, Landers said those discussions had taken place, but that “ there are times that plans don’t turn out the way you expect them to.”

Landers said plans to develop an online registration portal “didn’t come to fruition, and so we had to step back and retool and redevelop.” There were problems with the technology and with locating a vendor for the portal, she said.

But what about the number of doses still sitting in freezers across the state waiting to be used? ADPH in recent statements and interviews with reporters has said that demand for vaccinations continues to outstrip the state’s supply.

When asked how that could be, given that the state still had on hand 231,190 doses as of Monday morning, which is 155 percent of what’s already been administered in Alabama, Landers said there are more than 650,000 people that make up those currently able to receive vaccines in the state: Medical workers, police and firefighters, those aged 75 and older and nursing home residents and staff.

Some of the state’s supply is also being held back for required second doses, Landers said, and with vaccinations of those aged 75 and older, police and firemen, having begun on Monday, the number of doses on hand is likely to drop quickly in the days ahead, and second doses for those individuals will be needed as well, she said.

There was a long line of older residents standing outside of the Calhoun County Health Department in Anniston on Monday morning, and the parking lot was full, signs that expanded vaccinations that began Monday could send the state’s vaccination numbers rising in coming weeks.

“People say, well, manufacturing. There’s more manufacturing, and that’s true, but at the same time we know that that demand can outstrip that supply very quickly,” Landers said. “We have to do it correctly and appropriately for every person, rather than just giving a first dose and hoping that second dose is going to come along.”

Landers noted confusion last week after Health and Human Services Secretary Alex Azar announced the federal government would no longer hold back second doses of vaccines and instead send them out to states, in a push to get states to expand vaccinations to larger groups.

Later that week, it was discovered that the federal government no longer had any doses in reserve, and had already been shipping out that stockpile to states.

“While we are concerned about the supply of vaccine, the Alabama Department of Public Health will administer the doses we have according to appointments as we have scheduled, recognizing that further efforts are dependent upon supply,” ADPH spokesman Ryan Easterling told APR last week.

Of the 640,150 doses that have been allocated to Alabama by the federal government — based upon federal guidance and use of Operation Warp Speed’s COVID-19 vaccine guidance software, called Tiberius — just 59 percent has been delivered to the state.

“Part of it is, we have to bring on more entities to be able to secure those doses, so we’ll have more providers to be able to give those doses,” Landers said of the undelivered doses. “And secondly, even if you submit an order for a certain amount, you might not get everything you asked for.”

Landers said ADPH had expected more entities would be involved in administering vaccines, as opposed to the burden falling more upon local county health departments.

“That we will be doing some of this, but we might not be doing the volume that we’re doing,” Landers said. “As it turns out, we’re doing quite a bit of the volume directly through the health departments.”

Landers said she believes the lack of response from more entities willing to do COVID-19 vaccinations may come down to an unfamiliarity with doing mass vaccinations.

“I certainly appreciate every one of our providers that has come forth. Just doing mass vaccinations, or large numbers of vaccines, that’s significant,” Landers said.