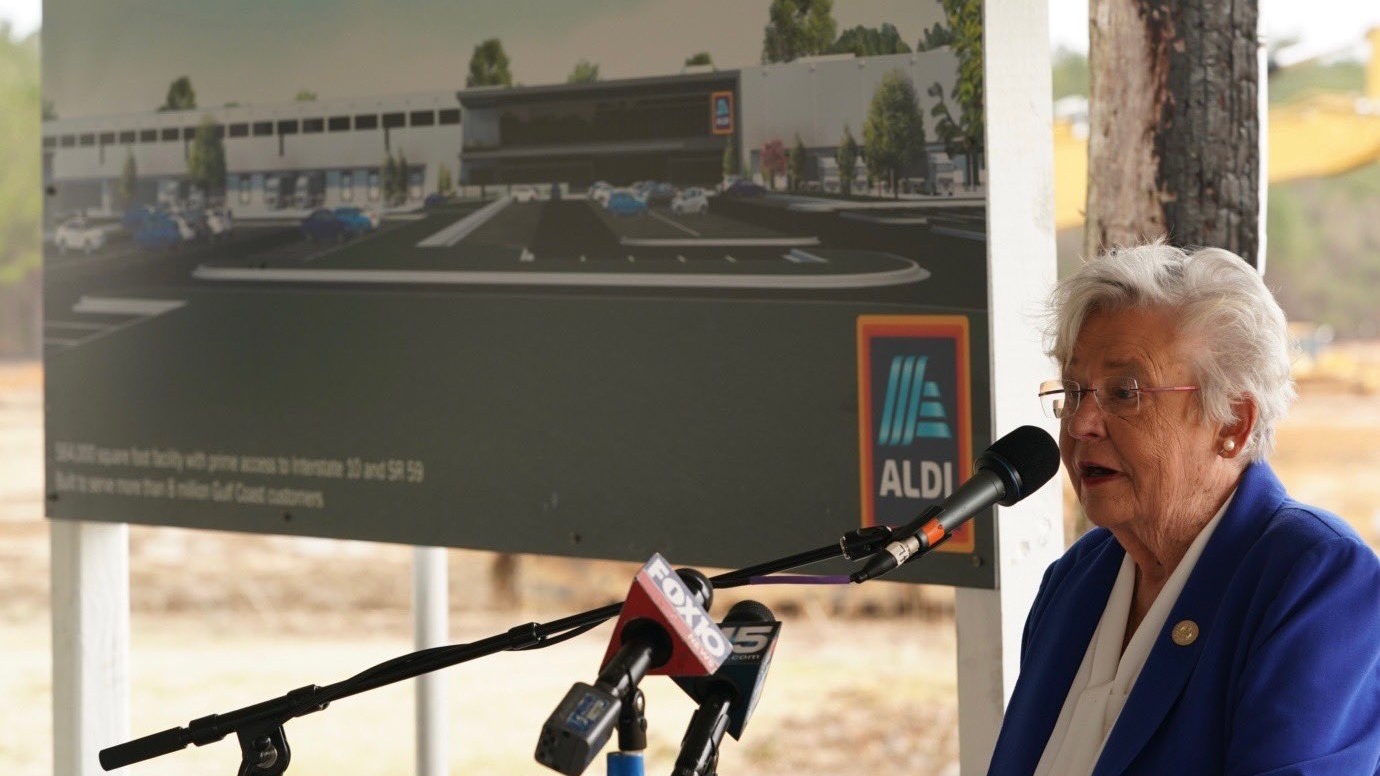 Gov. Kay Ivey attended a groundbreaking of a new regional headquarters for the retailer ALDI.

The Alabama Department of Commerce announced that the retailer ALDI has officially launched construction on a new regional headquarters and distribution center in Baldwin County to support the company’s expansion across the Gulf Coast region.

The project will bring an estimated $100 million in capital investment and more than 200 jobs to Loxley. The 564,000-square-foot facility is scheduled to open next year.

“We’re proud to stand behind ALDI’s commitment to bringing value to the people of Alabama and the Gulf Coast region,” Ivey said.

We’re in Loxley today celebrating the groundbreaking of @AldiUSA’s new regional HQ & distribution center! This $100M investment will create 200 good paying jobs. Despite a challenging year for our businesses, this is another major example that AL’s economy remains strong. pic.twitter.com/Gco7WZV5Zh

Economic developer Nicole Jones said: “Corporate operations, as well as distribution and logistics, are some of Alabama’s foundational business targets, meaning these types of businesses intrinsically provide core competencies for a variety of industries. ALDI grocery has a growing footprint in the Gulf Coast. Because of the close proximity to interstates and the Port of Mobile, a regional headquarters and distribution hub in Loxley … will allow ALDI to efficiently meet consumer needs. The jobs created and services provided as a result of the project will have positive effects on the local economy and our entire state.”

The Baldwin County facility will become the company’s sixth distribution center in the South. It will be equipped to service up to 100 stores in Alabama, southern Georgia, Mississippi, the Florida Panhandle and Louisiana.

“We welcome the company’s plans for a regional headquarters and distribution hub in Loxley that will create 200 good-paying jobs for our hardworking citizens,” Ivey said.

Loxley Mayor Richard Teal said: “We are ecstatic that ALDI has chosen Loxley for their regional headquarters and distribution center location. We are eager for the new job opportunities that are to come for citizens as well as the economic growth and development for our community.”

Lee Lawson is the president and CEO of the Baldwin County Economic Development Alliance.

“ALDI’s decision to bring this facility to Baldwin County further cements our place as Alabama’s leader for incoming business investment and growth,” Lawson said. “This first-class facility will create a diverse mix of both warehousing and white-collar jobs for our community, and we’re excited to see construction begin.”

Once the new distribution center is underway, ALDI plans to open as many as 35 new Gulf Coast-area stores by the end of 2022. The first two stores in Tallahassee, Florida should open later this year.

“We’re incredibly proud to continue growing in all aspects of our business, from opening new stores to enhancing our eCommerce offerings, especially in light of the challenges businesses have faced in the last year,” said Jason Hart, CEO of ALDI U.S. “Our commitment to our shoppers, new and existing, is the same — we will do everything in our power to offer the lowest possible prices every day — and we look forward to supporting more communities across the country with amazing ALDI products at a value that can’t be matched.”

ALDI currently operates 30 stores across the state of Alabama.