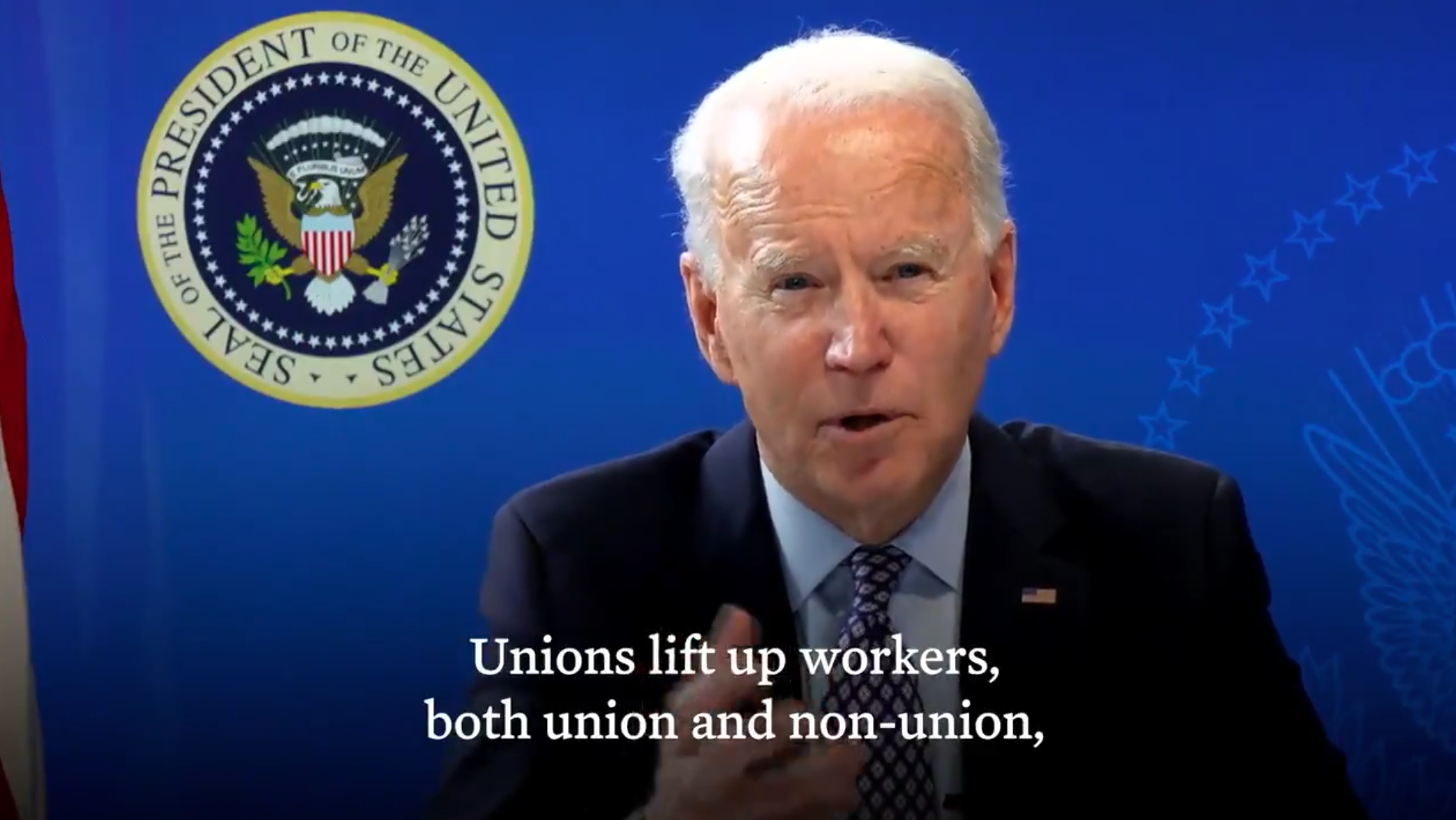 President Joe Biden in a video supporting the union vote in Alabama.

President Joe Biden is backing the workers in the Amazon unionization fight. Biden issued a brief statement Sunday — one that didn’t name Amazon specifically but did note “an important vote” in Alabama — reminding workers that it was their right to unionize and that unions, by way of the National Labor Relations Act, were encouraged in the United States.

Workers in Alabama – and all across America – are voting on whether to organize a union in their workplace. It’s a vitally important choice – one that should be made without intimidation or threats by employers.

Every worker should have a free and fair choice to join a union. pic.twitter.com/2lzbyyii1g

“I have long said that America wasn’t built by Wall Street. America was built by the middle class, and unions built the middle class,” Biden said. “Unions put power in the hands of workers. They level the playing field. They give you a stronger voice for your health, your safety, better wages, protections from racial discrimination and sexual harassment.”

Workers at Amazon’s Bessemer fulfillment center are currently voting to form a union with the Retail, Wholesale and Department Store Union. The vote at the Amazon facility in Bessemer is being closely monitored all over the country, with many seeing it as a potential first step in a sort of union revival in the country. Biden called the vote of the 6,000 workers at the retail giant “vitally important.”

The president also warned against illegal anti-union tactics by supervisors and others associated with Amazon or other anti-union organizations.

“Let me be clear: it’s not up to me to decide whether anyone should join a union. But let me be even more clear: It’s not up an employer to decide that either,” Biden said. “There should be no intimidation, no coercion, no threats, no anti-union propaganda.”

It’s a little late for that warning. Complaints from workers and union organizers about threats and propaganda from Amazon have been steadily increasing since the workers decided last November to hold a vote for unionization. That vote began earlier in February and will continue until March 29.

According to Vice News, the company distributed pamphlets encouraging workers to “vote no.” It also has held mandatory meetings on the unionization effort and set up a website to push against it. Amazon also fought to require an in-person vote and tried to delay the current vote.

Biden’s position on the vote should not be a surprise. During his campaign, he promised to be a pro-union president and has made his pro-worker platform one of the centerpieces of his presidency.

Vote counting in the unionization effort will begin on March 30.

Stuart Appelbaum, president of the RWDSU, in a statement Sunday thanked President Biden for his message.

“Thank you, President Biden, for sending a clear message of support for the Amazon Union workers in Alabama seeking to bring the first union to an Amazon warehouse with the RWDSU. As President Biden points out, the best way for working people to protect themselves and their families is by organizing into unions. And that is why so many working women and men are fighting for a union at the Amazon facility in Bessemer, Alabama,” Applebaum said.

It’s the first major unionization effort at Amazon since a failed attempt to unionize in Delaware in 2014.

The NLRB said election ballots will be mailed to employees at the Amazon Fulfillment center beginning Feb. 4.