An omnibus gambling bill, by Sen. Del Marsh, R-Anniston, failed on the floor of the Senate. The Marsh bill would have created as many as ten full-blown casinos across the state, legalized sports betting, created a state lottery, and ordered the governor to negotiate a deal between the state and the Poarch Creek Band of Creek Indians, commonly referred to as the Poarch Creeks or PCI.

Sen. Garlan Gudger, R-Cullman, was among 13 Senate Republicans who voted “no” on Marsh’s plan.

Following the rejection of the Marsh gambling bill, McClendon introduced his lottery bill with both Marsh and Gudger as co-sponsors.

Under the Constitution of 1901, lotteries and games of chance are forbidden. That has been amended over the years to allow dog racing, horse racing and charity bingo games in a number of counties.

McClendon’s lottery would divide the money between the state general fund and education.

On Tuesday, the Senate Finance and Taxation Education Committee gave a favorable report to Senate Bill 61, by Sen. Donnie Chesteen, R-Geneva, creating the Education Retirees’ Trust Fund Funding Act, which would be a separate account from the trust fund or the teachers’ retirement system fund to be used to pay for retired education employees to get bonuses or raises.

“This is a separate trust fund,” Chesteen explained. “We are not using ETF dollars. New dollars would fund this, for example a lotter bill.

“What a good idea!” McClendon said, “I sure hope that members of this committee can be supportive of the lottery bill so that we can help these education retirees out.”

The 10-0 vote is significant because it takes 21 votes to approve a constitutional amendment in the Senate. Democrats as well as Republicans on both sides of last week’s defeat of the Marsh bill voted for McClendon’s bill to get out of committee. If the three sides stay united on the floor, SB319 could sail out of the Senate as early as Thursday.

The Senate meets today, March 18, to consider the Education Trust Fund budget. The $7.7 billion ETF is the largest in state history. Thursday is day 16 of the 2021 Legislative Session. By law, a session can last no more than 30 days.

Holding a giant jackpot over the head of desperate people is an unethical way to generate revenue. 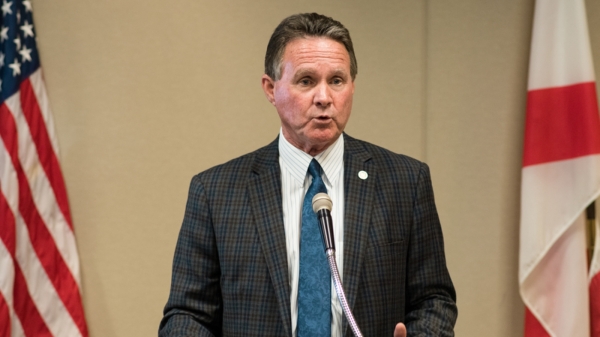