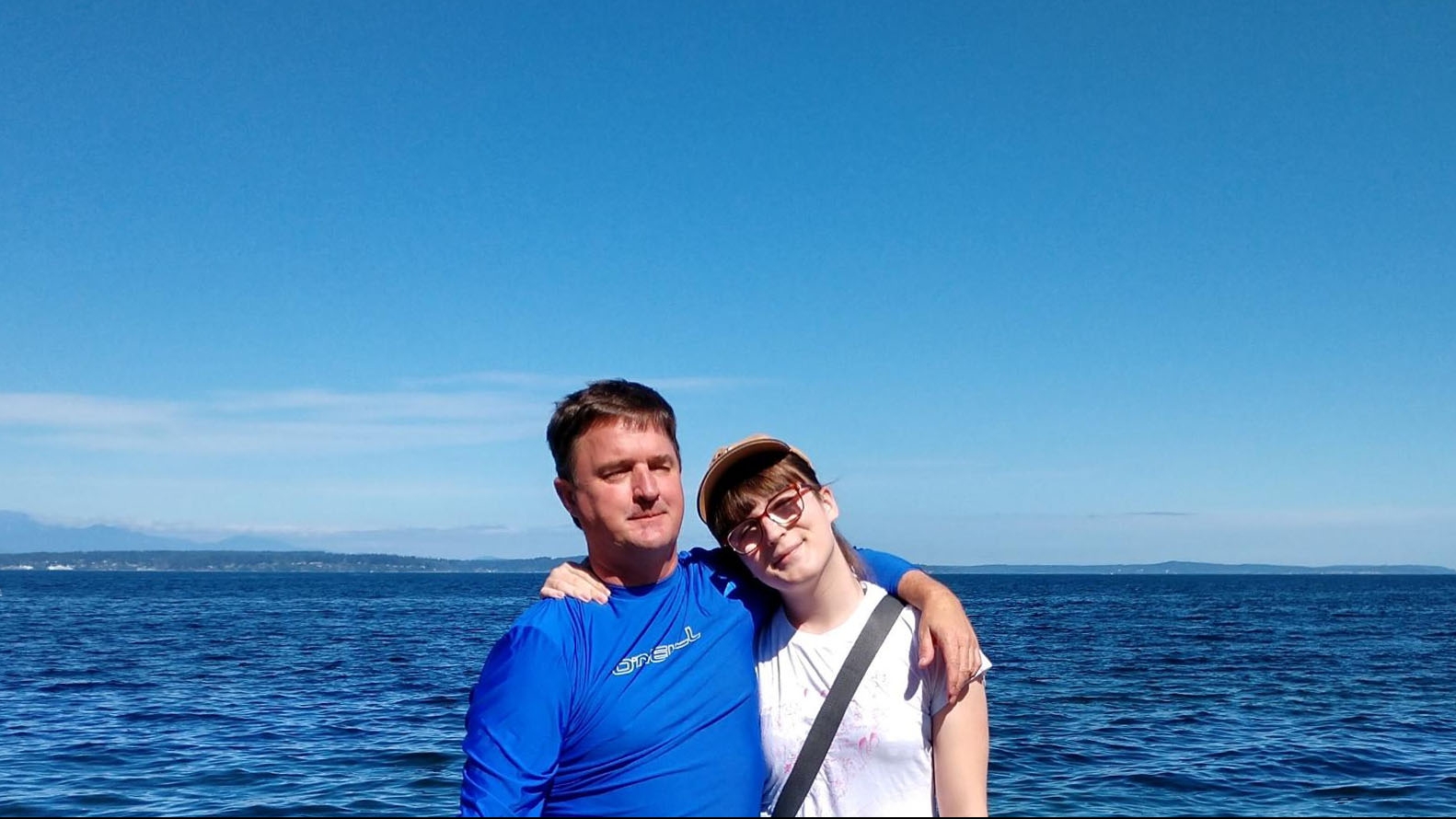 David Fuller told the Alabama House Judiciary Committee that he was terrified when he addressed them last month. His testimony that followed was heartfelt enough that the Human Rights Campaign edited a version to spread around the web.

“I was shaking because I have not talked about Jess’ situation to almost anybody,” Fuller said of that morning. The 30 or so people in the room were more souls than he’d ever discussed his daughter’s transition with, and he wasn’t aware that the hearing was being live-streamed.

Jessica Fuller, 21, could see the anxiety in her father’s face in the days before the hearing. During the two-and-a-half-hour car ride from Gadsden to Montgomery, she kept telling him he’d do great. She wasn’t surprised that he got the response he did.

“He never lets me down. He’s just that kind of dude,” she said.

Jessica was more angry than nervous as she watched several supporters and critics of HB1 tell the committee how they thought the bill would affect transgender kids going through what she lived a few years ago.

“It’s cruel and mean and stupid, but the reality is you can’t change these people’s minds,” she said of the bill’s proponents.

Her dad said he was hopeful that his words might move the needle. A few hours earlier, he had watched the Senate Health Committee vote 11-2 in favor with no deliberation to speak of. The House committee members were more respectful and curious, Fuller said. They seemed to want to learn about the subject.

Two weeks later, the committee approved the bill in an 11-3 vote along party lines. Chairman Rep. Jim Hill, R-Moody, proposed an amendment that removed the bill’s ban on allowing psychologists from providing counseling to transgender minors. That also passed. Rep. Wes Allen, R-Troy, who introduced HB1, said he was “not comfortable” with the amendment but would accept it out of respect for the committee.

Fuller wasn’t surprised. It’s Alabama, he said. He sees Republican lawmakers in the Bible Belt as stuck between a rock and a hard place on sexual identity issues no matter what their feelings are.

“Even the guys that have empathy for it feel awkward to vote for LGBTQ stuff because their constituents, you know, are going to start with their complaints and hammering on Bible quotes and things like that,” he said.

Fuller, 56, a sergeant with the Gadsden Police Department, has had those conversations with the few relatives and friends who are close enough to his family to have seen Jessica’s transition unfold. For those with strong religious views, being gay or transgender is a choice punishable by an eternity in hell. Fuller pushes back on that, especially when he hears, “God doesn’t make mistakes,” which he hears a lot, he said.

Even after learning all that he has about transgender issues, he still doesn’t fully understand it, he said. But he understands that there are populations of people who have more complex chromosomal makeups than the XX pair of sex chromosomes that determines female and XY that determines male. There are males who have two X chromosomes but lack a normal Y chromosome. People can have male or female genitalia that doesn’t fully develop. There are gray areas in human biology that get left out of the conversation, Fuller said.

Jessica was 16 when she told him she was transgender. She wrote it in a note she left at his computer. She was scared and went to throw it away at one point, but he read it. He hugged her and told her he loved her.

It hadn’t been long that she knew she was transgender. She got to know the LGBTQ community at her school when she started trying to find her sexuality in middle school, but she never learned much about the “T.” One day, she read an article about Caitlyn Jenner’s experience as a transgender person and had an epiphany.

“Everything clicks into place,” Jessica said. “Everything makes sense — all your memories, all of a sudden all the patterns come together and you realize right then and there that this is who you are, or this is what I want to do.”

Her gender dysphoria had always been present but there were no visible trans people or resources to turn to, she said. It manifested as confusion, frustration and anger. As a young boy, she had a nightly prayer ritual to ask God to turn her into a girl. She didn’t know at the time that that was a real option, but her subconscious knew who she really was, she said.

Starting puberty blockers felt like pain relief — sort of. It’s difficult to describe, Jessica said, because she knows she’ll never be fully female at the chromosomal level. There’s just something that feels right about her body receiving female hormones. She feels calmer.

“I don’t really like to say that brains have a gender, but it does seem to be that once you start taking hormones, it’s like your brain is like, ‘Cool, we’re using the right secondary sex hormones,’” she said.

Transitioning in high school came with some of the flack one would expect from peers in that environment. Notes were stuck on her back a couple of times. There were jokes and name-calling. One kid followed her around calling her the “F-word.” One day, he sat next to her while she was on her phone. He asked if she was texting her boyfriend.

Why would she be texting him since he was sitting right next to her, she asked. She told him how much she cared about him and assured him they could go on a date later.

“Poor guy. He was probably gay and I’m just an attractive human being,” Jessica said. “You know how some young boys are. They’ll just pick on the girl they like.”

Her father had his own resistance to work through at times. She was excited the first time she wore a dress when they went out to eat, but that experience was traumatic for him, Fuller said.

Her ability to face her schoolmates and to graduate with her class with “Jessica Fuller” on her diploma was what showed her dad how to embrace her transformation, and how to stand for it against those who don’t understand it or are hostile to it.

“If I think back on the time when I finally felt the power of this, where her bravery turned me around, that was it,” Fuller said.

Dr. Morissa Ladinsky, a pediatrician with the University of Alabama at Birmingham’s multidisciplinary gender health team, met the Fullers when they sought treatment. Reckoning with a child’s gender diversity is a journey for every family that Ladinsky has treated, she said.

When Fuller told the House committee that neither he nor his daughter chose this — that he would have chosen anything but this — he was saying what Ladinsky often hears from parents. The realization that their child’s state of being won’t end, but that their life might be in their own hands, is profoundly frightening.

Ladinsky also testified at the committee hearing. She told its members the same thing that Fuller did: her team uses hormone therapy only when, over time, a patient clearly indicates it is what they want. They educate young people and their families about every other option available to them before they consider medical intervention.

Prior to the hearing, when Allen pre-filed his bill, Ladinsky contacted him and asked if he’d like to sit down and learn more about what her team does. He agreed. Allen met with her and several colleagues, including Linda Lee, executive director of the Alabama chapter of the American Academy of Pediatrics.

“And he asked great questions, and it was a terrific discussion. It really was,” Ladinsky said. “But then he just went and filed the identical bill.”

Allen could not be reached for comment by the time of this article’s publication to confirm Ladinsky’s account of the meeting, but in an op-ed he wrote for the Troy Messenger, he stated that the bill is meant to protect minors from the “permanent and dangerous effects” of hormone and surgical procedures.

Ladinsky and other doctors have refuted this, saying the legislation is written to outlaw things that are already outlawed, like gender reassignment surgery for minors, and to prevent threats that don’t exist, like irreversible damage from puberty blockers.

No gender-affirming surgeries have ever been performed on minors in Alabama. Ladinsky noted that no child, teen or parent can make the decision to start blockers or hormones alone, and the entire treatment team works together to decide what medication is prescribed and when.

Allen wrote that he has heard from people who advocate for access to hormone treatments by children as young as 7. His bill would make that illegal.

But that’s already illegal in that Alabama’s age of medical consent is 14, Ladinsky said. For her and the rest of the bill’s opponents, it’s a solution in search of a problem. Most minors who seek treatment do so at or after the time they hit puberty, she said. Their bodies are treating themselves with hormones, so to speak — hormones that misalign with who they are.

It’s hard to determine how many transgender people exist due to the challenges of collecting self-reported, or self-affirmed, information like that. A 2016 report estimated that there were 1.4 million transgender adults in the U.S. or 0.6 percent of the population. It estimated that 22,500 of them lived in Alabama.

As for why there is this conflict between body and brain, nobody knows exactly. The brain gives us some clues. Certain areas of the brain are larger depending on a person’s sex at birth. Researchers have found that in people who identified with a different gender than that assigned at birth, their larger brain regions corresponded with the gender they identified with.

The answer lies in the neurobiology of gender identity, Ladinsky said. Sexual organs are a big part of gender, but they aren’t all of it. Included in the mystery are patterns related to other functions of the mind and how it expresses itself.

“Disproportionately, these youth are incredibly gifted in the fine or the performing arts. I mean truly gifted. I have kids whose art ability is mind-boggling. I have kids who can play four instruments and compose at 10, 11, 12 years of age,” she said. “See what I mean by neurobiology? There’s something. It’s something.”

Jessica said she doesn’t expect any of that to change the minds of the lawmakers who seem poised to ban the treatments that made life livable for her. You can’t change somebody’s mind if they’re not open to change, she said.

Fuller pleaded with the House committee not to approve a bill that could have him putting handcuffs on the doctors who saved his kid’s life, and who helped him navigate a situation that he couldn’t have imagined would happen until it did.

That they approved it doesn’t bode well for young people like his daughter, or for her, Fuller said.

“We’re thinking about just moving completely, to some place that’s more in tune with her needs,” he said.