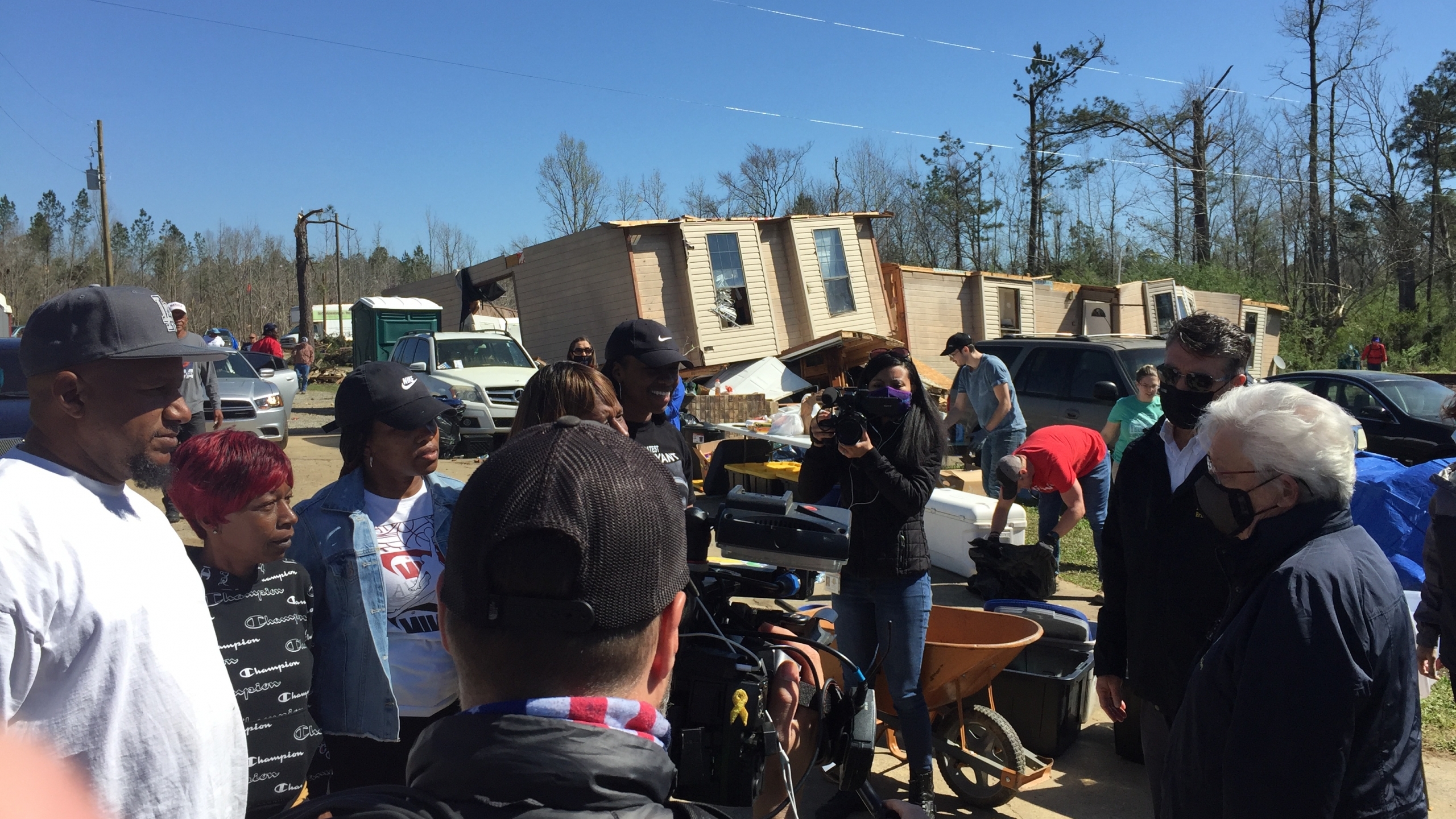 Alabama Governor Kay Ivey stood Monday near piles of debris, battered cars and what remained of the belongings of Kalvin Bowers’s family as the Ohatchee man described losing three family members and almost everything else to Thursday’s tornado.

Ivey’s tour of tornado damage included stops in Calhoun, Hale and Shelby counties. At a press conference at a volunteer station set up at Oak Bowery Missionary Baptist Church at the start of her tour, Ivey urged local officials to accurately tally damages caused by the tornado that took the lives of five Alabamians.

“We’ll do everything in our power to help those impacted come back, and come back stronger,” Ivey said but stressed that it’s important that local city and county officials gather all the evidence of damage and get that information to the Alabama Emergency Management Agency.

Whether or not Alabama qualifies for federal disaster relief depends upon the state’s damage toll meeting a required threshold, Ivey said.

“So it’s just so important that we all work together,” Ivey said.

Chris Darden, meteorologist-in-charge at the National Weather Service in Birmingham, said over the eight-day period leading up to Thursday’s storms, the state was hit with 36 tornadoes.

“It hits us hard,” Darden said of the impact on NWS staff that five people had been killed in Thursday’s tornado.

Darden emphasized the need for families to have plans in place “before severe weather happens” and to “be the hero” and call loved ones to alert them when bad weather is approaching.

“I talked to a family of six people that survived in a home that was obliterated because a family friend called them and they got to shelter,” Darden said.

Brian Hastings, director of the Alabama Emergency Management Agency, told reporters that across the U.S. the average warning time of an approaching tornado is approximately 13 minutes, but because of the long track nature of Friday’s storm, Ohatchee and Wellington had about 18 and 29 minutes notice respectively before it arrived.

“It emphasizes the point that you have to be connected to critical weather intelligence. You have to have a plan, and when you get that information you have to act,” Hastings said.

Hastings also encouraged local officials to collect all the damages to improve the state’s chance of receiving federal aid.

Hastings said unless damages are accounted “it’s like nothing happened.”

“We really don’t have nowhere to stay,” Bowers told Ivey, speaking of his 10 surviving family members who lived among the five destroyed mobile homes on his property.

Bowers lost his sister, Barbara Harris, 69; her husband, Joe Wayne Harris, 74; and their 38-year-old daughter, Ebonique Harris, to the tornado. Two others died in Calhoun County on Thursday. James William Geno, 71, died at his mobile home in Ohatchee. Emily Myra Wilborn, 71, died at her Wellington home.

Ebonique Harris’s 13-year-old daughter, Ontarriah Braxton, is in Children’s of Alabama being treated for injuries she sustained when the tornado tore her home apart.

Bowers told Ivey they’ve been gathering up what personal items can be saved and placing them under tarps “until we can get past the funerals” and begin to rebuild.

“It’s kind of a bad situation,” he said.

Ivey walked portions of Bowers’s eight acres on Grayton Road South as he pointed to where his brother was found in the woods, alive but injured. Bowers described where the homes once stood, where now only bits of metal, insulation, broken glass and damaged cars dot the hillside.

“It looks like nobody ever lived here,” he said.

Ivey and 11 other Republican governors are seeking to overturn the landmark abortion case.