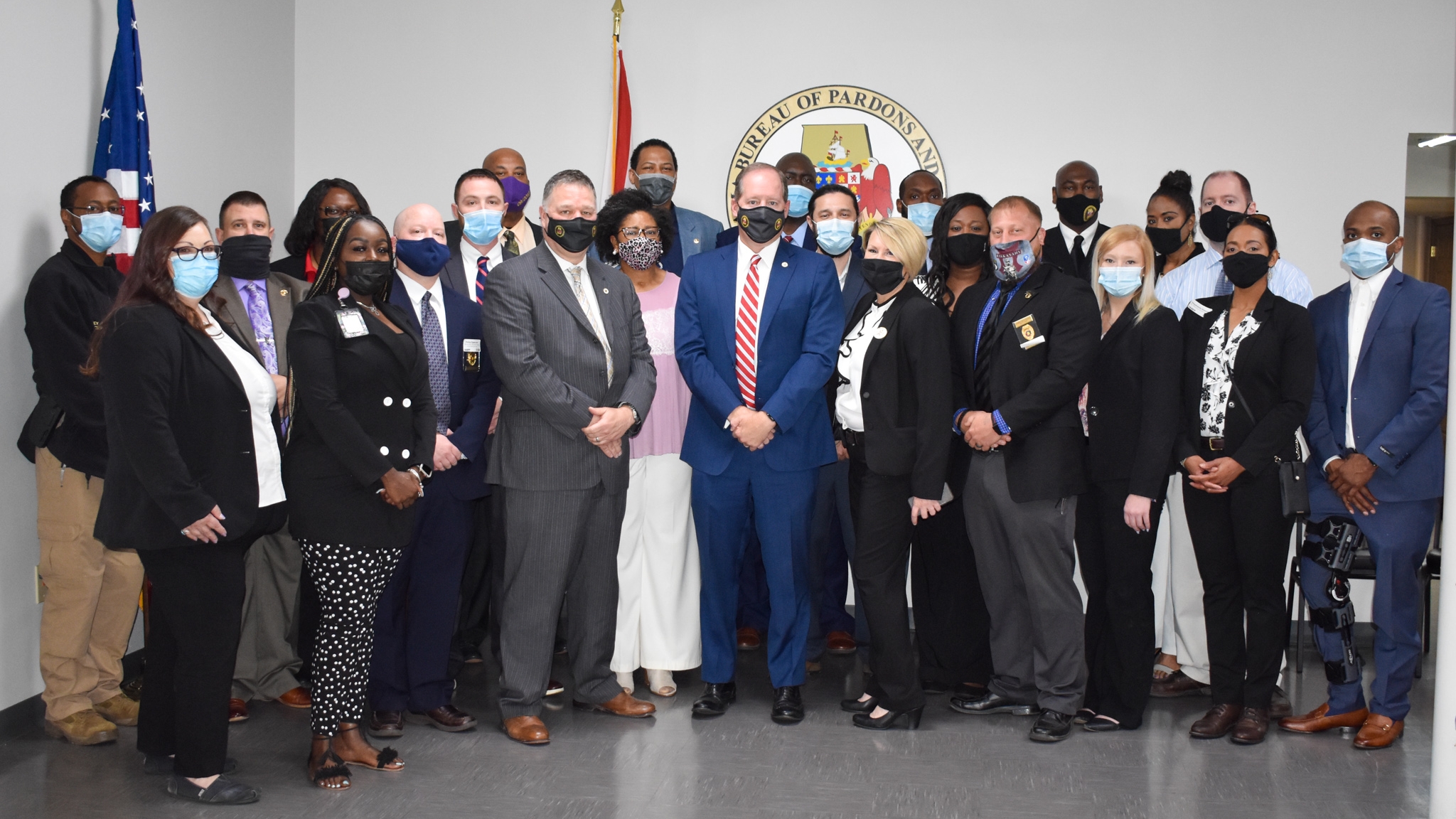 Cam Ward, director of the Alabama Bureau of Pardons and Paroles, on Thursday stood inside the bureau’s Montgomery Day Reporting Center and made a case for why such centers, which help those paroled and pardoned readjust to life outside prison, should be all across the state.

During a press conference on what was described as a growing partnership between the bureau, the Alabama Department of Corrections and the Alabama Community College System, Ward pointed to one specific success story, a man named Samuel Huntington, a graduate of the Montgomery center.

Huntington said he received a life sentence in 2010 for trafficking drugs, and was granted parole in March 2020 and was ordered to attend the Montgomery Day Reporting Center. While discussing his time there, Huntington stopped for a moment, and appeared to become emotional.

“I’m just moved by a lot of stuff that has happened in my life through this program,” Huntington said.

The center helped him with housing and to get his driver’s license, he said. He got a job outside of the center, but has since been hired in a program run by the Alabama Department of Mental Health as a mentor to help others coming into the Montgomery Day Reporting Center.

“It has been a long, hard journey for me, but I kept my head up and kept pushing, each and every day,” Huntington said. “I didn’t give up…I lost a lot, but I gained way more than I lost.”

The Day Reporting Center program began in 2015, with a first facility in Birmingham, and has since added centers in Montgomery, Tuscaloosa, Mobile and Huntsville. Day reporting center “lites” are located in Bay Minette, Fort Payne, Guntersville, Jasper and Opelika.

Rebecca Bensema, the bureau’s division director for special populations, said Thursday that those on pardons and paroles who come to the centers are those most in need of extra services, who struggle with a place to live, drug addiction, employment, mental health and low educational attainment.

Enrollees at the center attend classes five days a week, from 8 a.m. until 5 p.m., and are drug screened at least twice a week, Bensema said. They receive substance abuse treatment, cognitive behavioral therapy, educational training and job readiness training. Bensema said the centers use evidence-based programs, and explained that graduating is no easy task.

The bureau’s 2020 annual report shows that in 2019 there were almost 900 people enrolled in the day reporting centers, but that dropped to approximately 300 the following year. A bureau official said Thursday that the COVID-19 pandemic caused the drop in numbers.

“When you see a story of someone who’s made a success out of life, that’s what our goal is,” Ward said.

Ward said the criminal justice system must be looked at through a holistic approach, yet the idea of the bureau and the Alabama Department of Corrections and the Alabama Community College System working together “seemed foreign for so long.”

“And it’s silly, and programs like this show why working together succeeds,” Ward said.

Ward took over as director in December, replacing former Alabama Attorney General Charlie Graddick, who in December 2019, decided to end the bureau’s Life Tech Training Center in Thomasville, where for more than a decade recently paroled received job training provided by the Alabama Community College System.

Graddick’s decision drew criticism at the time from state lawmakers, Alabama Community College System Chancellor Jimmy Baker and Ward, who described the program was critical at keeping people from reentering prisons. Ward now plans to reopen the Life Tech Training Center in Thomasville, although that’s not yet happened.

Ward said Thursday that 95 percent of people in Alabama prisons will be released, and asked “What do we want that person to look like?”

“It’s real simple. With the amount of compassion and the rewarding of human dignity, what you can do is you can make every person a success story,” Ward said.

Alabama Community College System Chancellor Jimmy Baker, speaking during Thursday briefing, applauded Ward’s appointment as bureau director, and said the state must be able to provide the support “that can change lives.”

Baker explained that the community college system has an important role to play in helping those involved with the criminal justice system.

Ward said his goal is to have day reporting centers “in every corner of this state.”

“You replicate this around the state and that is how you reduce recidivism,” Ward said.

Asked by APR what it would take to make his vision of day reporting centers spread across the state, Ward said it will take a commitment among the different agencies “and you’ve got to have the resources of the Legislature.”

“I’ve been selling that vision to the Legislature daily, and a lot of them weren’t aware that this is even available,” Ward said.

“You go through one of these programs, that drops in half, for a very small financial investment,” Ward said. “You can’t do it all at once, but maybe over the next six to 10 years what if we had this everywhere, and we saw the state recidivism go from 30 percent to 14 percent?”

“We want our people to succeed. All of us would want that, and if we can do something to make that possible, through mental health treatment, substance abuse and education, I just think that’s the future of criminal justice,” Ward said.

Advertisement. Scroll to continue reading.
In this article:Alabama Bureau of Pardons and Paroles, Alabama Department of Corrections, Cam Ward, Featured