Alabama’s strong showing in the 2020 Census helped the state keep all seven of its congressional districts, the U.S. Census Bureau announced on Monday. The latest Census results show that Alabama’s population is at 5.03 million — up from 4.8 million in the 2010 Census.

While Alabama has held firm in both its congressional representation as well as its Electoral College votes, California, New York, Illinois, Pennsylvania and West Virginia will be among the states who will be losing seats in the House of Representatives. Florida and Texas both gained new House seats.

The news means that Alabama will retain its current number of seven seats in the U.S. House of Representatives for the next 10 years.

“This data reveals what we’ve known all along – Alabama is a great state to call home, and many are choosing to do so,” Gov. Kay Ivey said. “I am extremely pleased that we will keep all seven of our current seats in the U.S. House to provide valued and needed voices to advocate for our state and our people for the next 10 years. Our success in the census was certainly a group effort across the entire state, and I offer my heartfelt thanks to everyone who played a part.”

Throughout the 2020 Census, Ivey led a dogged effort in alignment with the Alabama Department of Economic and Community Affairs and the Alabama Counts! 2020 Census Committee to ensure participation numbers statewide reflected a proper Alabama representation.

ADECA’s efforts started in 2017 and continued with the Alabama Counts! Committee, a dedicated team effort of hundreds of individuals and groups working together since August 2018. The effort included a multifaceted campaign throughout 2020 that included grassroots outreach, public events and advertising. The effort was forced to adjust strategies and tactics several times due to the COVID-19 pandemic.

“This was by far the most time and resources that Alabama state government has ever given toward a census count, and I am happy that our efforts and hard work have paid off,” said Kenneth Boswell, chairman of the Alabama Counts! Committee and director of ADECA. “Thanks to the leadership of Gov. Ivey and the dedicated work of all our many partners at all levels, we have succeeded in achieving an accurate count and fair representation.”

The 2020 Census was the first to be conducted primarily online. Alabama’s position as the state with the 47th rate of broadband connectivity in the country put the state at a severe disadvantage early on in the census count. That was further complicated by the COVID-19 global pandemic, which prevented Alabamians from accessing their normal WIFI hotspots like libraries and McDonald’s dining rooms and delayed Census enumerators from doing their door-to-door counts of non-responders for weeks and months.

The early returns showed Alabama for sure losing a congressional district and possibly even two. Undeterred the people of Alabama, even those with no way to access the internet, found a way to get counted. They risked COVID and went to an internet-connected friend’s house to send in their Census, phoned in their count or mailed in a paper census.

In the end, despite all the hurdles, Alabama finished with higher self-response rates than the state did in the 2010 Census. 47 of Alabama’s 67 counties exceeded their final 2010 self-response rates. Even many Black Belt counties performed at or above their 2010 levels.

“Alabama keeping our seven Congressional seats is great news for Alabama!,” Congressman Mo Brooks, R-Alabama, said in a statement. “Alabama was at serious risk of losing a Congressional seat. Fortunately, by the slimmest of margins, Alabama citizens filled out their census questionnaires at rates high enough to dodge a political bullet. Alabama losing a congressional seat not only would have significantly hurt our representation in Congress, it would also have reduced our impact on the election of presidents. Thank you Alabama citizens and all those public officials who worked so hard to make sure Alabama’s Census count was so good.”

“I am pleased that Alabama will retain all 7 Congressional seats in the U.S. House of Representatives,” Congresswoman Terri Sewell, D-Alabama, said in a statement.

“During the 2020 Census, my office worked diligently to ensure our constituents knew how important it was to be counted — from hosting Census Job Hiring Fairs, virtual Census roundtables, and launching a social media outreach campaign,” said Sewell. “I am especially grateful to our phenomenal Census workers and advocates who worked tirelessly to make sure all Alabamians were counted. Because of our efforts, Alabama will continue to have 7 representatives in the U.S. House and will not lose out on the critical federal funding our community depends on that is allocated based on population.”

Economic development efforts by the state in the aftermath of the Great Recession are being credited with helping the state create the jobs needed to lure and retain people to the state of Alabama. State Policy Reports, a Washington, D.C.-based publication, ranked Alabama No. 8 in its Index of State Economic Momentum for the first quarter. The state’s score was 1.31, compared to a national average of zero.

Ivey said Alabama’s ranking in the new report shows that the state is fully on the road to recovery after the widespread national economic disruptions triggered by the COVID-19 pandemic.

“We’ve worked very hard over the past few years to strengthen the foundations of Alabama’s economy by encouraging business growth and equipping our workers with the skills they need to succeed in the 21st century workplace,” Ivey said. “I believe this ranking shows that Alabama is on the right path for the future.”

Greg Canfield is the secretary of the Alabama Department of Commerce. Canfield said the state is poised for additional economic vitality this year, with nearly $5 billion in new capital investment tied to business growth projects announced in 2020.

“The robust level of economic development activity recorded in spite of the challenges of the COVID-19 pandemic gives me optimism for the future,” Canfield said. “I’m confident that Alabama’s economy is being re-energized for growth.”

Alabama’s overall ranking in the report was higher than South Carolina, Georgia, Florida, Tennessee and Mississippi. Idaho led the way among the states, with Hawaii finishing last.

Economic developer Nicole Jones said: “Thank you to all who filled out the Census. Leaders in the public and private sector throughout Alabama’s 67 counties collectively emphasized the importance of Census participation, and civic responsibility paid off. Alabama is a shining star, our home, and we are thankful to retain the same amount of representation in Washington to speak on behalf of Alabama’s 5.03 million voices.”

The data released on Monday is limited to statewide population totals only. The more detailed county, city and census tract-level data needed for legislative redistricting will be released in August and September, according to the Census Bureau. 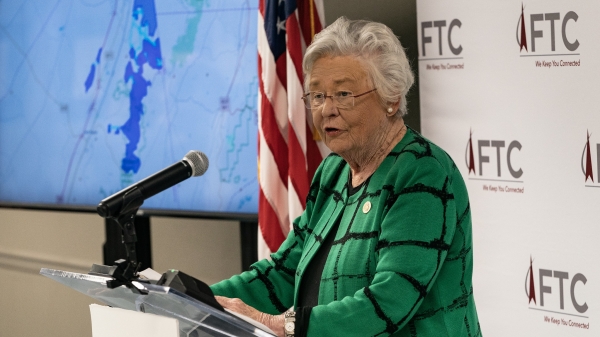