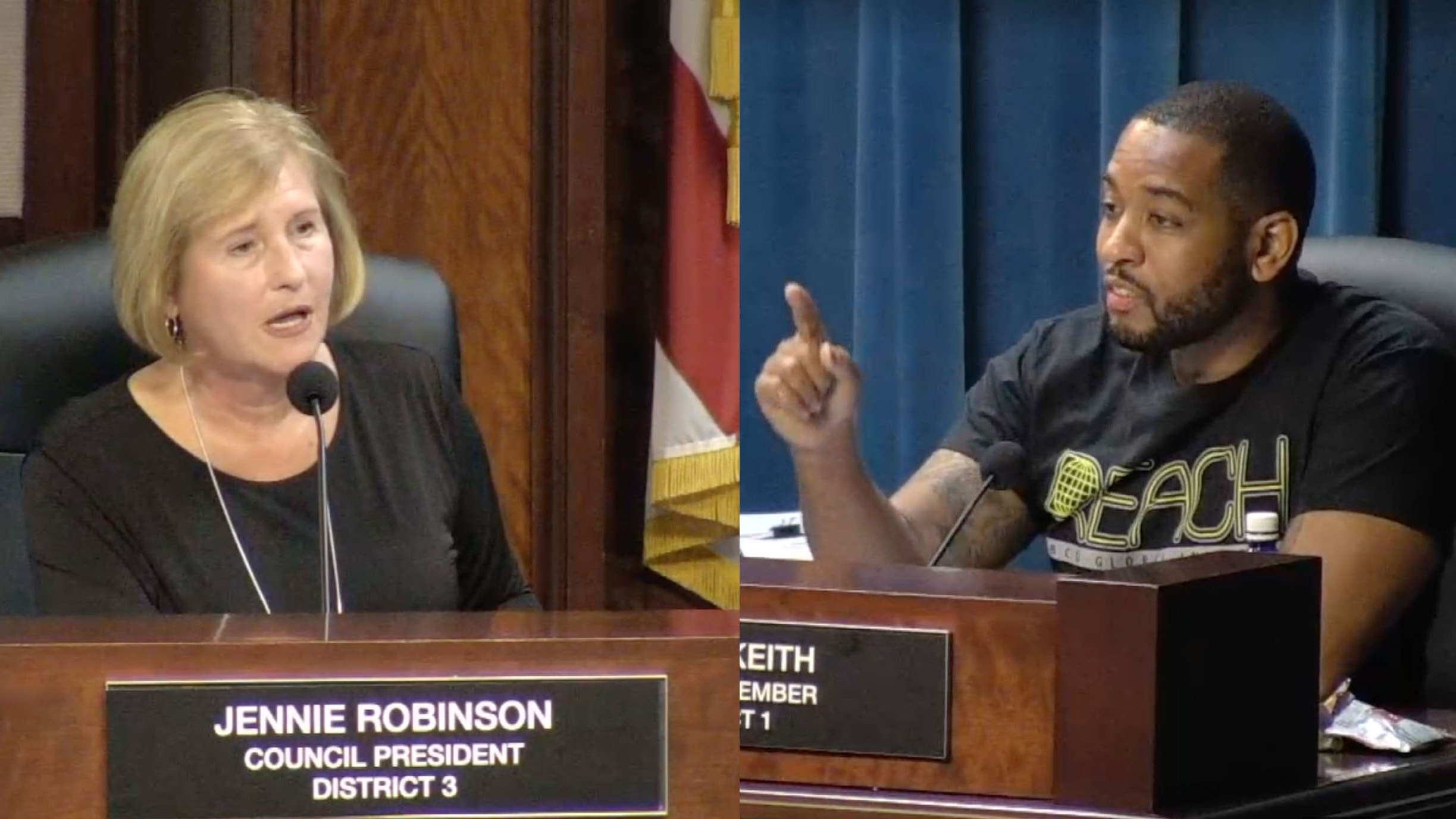 Huntsville City Council members weighed the pros and cons of accountability measures for police a week after hearing its commission’s report on the department’s handling of protests last June.

A few issues took priority, including the Huntsville Police Department’s policy against releasing body camera footage, who should respond to mental health calls, how neighboring law enforcement agencies operate within city limits and how complaints from residents as well as internal complaints from police officers are investigated.

In an hour-long presentation on April 29, John Hamilton, the city administrator, justified the department’s limited cooperation with the HPCAC’s investigation, saying that individual officers’ training records were too extensive to provide in print and that officers were made available to speak but were given the option not to under the advice that they may not be protected from civil or criminal liability. Only Chief Mark McMurray spoke to the HPCAC.

Hamilton said that much of the criticism he hears from residents has been about how the department functions on a daily basis, well beyond the tense circumstances of demonstrations over the murder of George Floyd and police violence.

“It’s pretty rare that those meaningful conversations are actually about protest management,” he said.

He defended much of the police response on June 1 and 3, questioning the characterization of the demonstrators as peaceful. He reiterated McMurray’s justification for using “chemical irritants” to disperse the crowd, stating that it was intended to avoid close physical confrontation between police and protesters.

“The point is, it’s uncomfortable — get out of here,” he said.

Hamilton distinguished between the CS gas that was used and tear gas, which he said it is being called inaccurately.

CS gas is designed to cause a painful reaction when it touches skin, which is different than the substance it has largely replaced in law enforcement use: OC gas, which mainly targets the sensitive membranes in a person’s eyes and respiratory system. Both are commonly referred to as tear gas.

Hamilton said he thought that too much focus has been put on decisions made by McMurray and Sheriff Kevin Turner on June 3. Those decisions were made in a larger context than whether the demonstration was peaceful or not, he said. Public criticism had also made too much of the intelligence gathering that McMurray said caused police to prepare for violence on June 3, which Hamilton said was not considered actionable intelligence. If it had been, the NAACP’s rally permit would have been revoked, he said.

Instead, according to Hamilton, police decisions were made based on uncorroborated intelligence reports — like outside agitators heading to Huntsville to engage in unlawful activity — that proved accurate as the day unfolded (there were protesters present who had criminal histories that indicated they had participated in protests elsewhere, Hamilton said).

There was also confusion about what the jurisdictions were for the different agencies present, he said. The Sheriff’s Office has jurisdiction over the Madison County Courthouse and unincorporated areas of the county, but Hamilton said that doesn’t mean they don’t have the authority to operate within city limits, like they did when they advanced down from the courthouse steps and into city streets as they fired rubber rounds at retreating demonstrators.

Hamilton urged several methods of improving police-community relations, like more programs like ride-alongs and meetups over coffee, as well as increased bike patrols to create more face-to-face contact and familiarity between officers and residents. Neighborhoods want more police, he said, and police need more resources to do the job better.

He touted the department’s efforts to improve officers’ mental health training but called for a major shift in how those issues are handled.

“We have got to get to a point where 911 calls for altered mental states get responded to by somebody other than a police officer,” Hamilton said.

He recommended having a trained media relations officer. Most importantly, he said, is a new policy agreement that requires every use of force by police that results in serious injury or death to be investigated by the state Bureau of Investigation rather than HPD Internal Affairs.

As Hamilton finished, a man in the back of the room yelled, “That’s what you call whitewashing!”

Council Member John Meredith praised the job police do on a regular basis but called the events of June 1 and 3 “very disheartening.” Based on the HPCAC report, he said it seems that HPD lost control of the situation on June 3 due to the behavior of the agencies that were there to support it. Deputies protecting the courthouse must not be able to shoot projectiles into HPD territory without being sanctioned by HPD, he said.

“It lends itself in certain circles to be perceived as though HPD either allowed or could not control other agencies from inflicting harm on our citizens, and we should make sure that that perception dies as soon as possible,” he said.

Meredith said he was shocked to learn that no HPD officers were interviewed by the HPCAC, and would have liked to know that in the months before the report was released. He said he wants the city to consider ending qualified immunity, which protects police officers from being sued personally for damage they cause in the course of performing their duties. If well-intentioned doctors can be held liable for malpractice and athletes can insure individual body parts, officers should be subject to some similar indemnity rather than making taxpayers shoulder the financial burden of damages caused in error.

Council Member Devyn Keith argued for body camera footage to be released under specified circumstances, like incidents that result in complaints against officer conduct. It would demonstrate transparency in cases of misconduct and could vindicate officers publicly when footage shows their actions were reasonable, he said, adding that both outcomes build public trust.

Council President Jennie Robinson said she’s concerned that making body camera footage public could infringe on the privacy rights of bystanders or crime victims who it captures, or could interfere with due process or the rights of alleged perpetrators.

“We’ve got to be able to protect the rights of others who might be involved,” she said.

Keith emphasized that the demonstrations on June 1 and 3 were part of a national outcry over a white police officer kneeling on a Black man’s neck until he died. He said he wasn’t interested in community outreach efforts that offer personal time with officers over coffee.

“I will absolutely sit with the chief if I like coffee,” he said. “I’m talking about the people who say, ‘I’ve got to call Devyn Keith,’ who get stopped, who will never, ever interact with a police officer unless it’s a really bad day.”

Keith’s name was invoked by a Black woman during a December incident involving HPD officers. She and a relative were arrested after one of them was tackled and handcuffed despite having made no threats or attempts to be physical with the officers, enraging bystanders. A department spokesperson told APR at the time that the officers’ actions were under investigation but did not answer calls for comment about the outcome of that investigation.

Keith alluded to it having resulted in disciplinary action, but criticized the department for not making that public. He characterized it as part of the department’s lack of accountability to the public, which erodes the community’s trust.

He recommended that the department hire a person or team to be a liaison for city residents.

Council Member Bill Kling, who has been listening to proposals from local activists with the Citizens Coalition for Justice Reform since December, read a list of ideas that ranged from designating a public information officer for the department to having an outside agency evaluate the backgrounds of all current HPD officers and future applicants to screen for racial bias or any other traits contrary to the department’s mission and philosophy, as the FBI did with National Guard soldiers assigned to protect the U.S. Capitol Building after the Jan. 6 insurrection.

“I’m going to say for the public record: I don’t want the sheriff deputies anywhere near our citizens in this city unless our chief is in charge,” she said.

Akridge asked Hamilton for specifics about what happened at the command level on June 3.

“How did it come to pass that Sheriff Turner didn’t say what he clearly had planned to do — crowd control — in our city?” she said.

Hamilton replied that the operation was complex and there were lessons learned about what to do better, but did not say what the extent of Turner’s directives were with McMurray on or prior to June 3. He said the responsibility for the lack of preparedness that contributed to the different agencies using different munitions according to different rules should be shared among city leadership, not assigned to any particular agency.

“Because I want to point out, Mr. Hamilton,” Akridge continued, “that as much as it makes sense logically that there was all these different jurisdictions and — it sounds like a rationalization to some people; that it sounds like a, ‘Well I wasn’t — you know, that’s their territory and that’s my —’ People want the confidence that someone’s ready to be — to accept that it’s our city and this is how it worked out.”

Akridge also urged that concerned residents be given the opportunity to meet with HPCAC council members and HPD officers, using a moderator, for a series of candid conversations where they can air grievances and talk about solutions.

Robinson quoted Bryan Stevenson, the attorney famous for his work toward racial equity who was the subject of the film “Just Mercy”: “He says rather than being stone throwers, we need to be stone catchers. There’s been a lot of stone throwing going on, and it’s time to catch some of those stones and move forward. I would suggest — let me start with catching some stones for the HPD officers who are out on the streets every day.”

Police officers are themselves subject to implicit biases among the public, she said. She commended them for the good things they do, like responding to a recent fiery traffic accident.

“I also want to do some stone-catching for HPD leadership,” Robinson said. “While it’s hard for your officers, it’s probably harder for you because the buck stops at the top and you are constantly under scrutiny.”

She commended McMurray for attending the meeting and the previous week’s hearing where the HPCAC report was presented. She called it a measure of his integrity which demonstrated that he wants to get better.

Mayor Tommy Battle said he had reviewed more than two dozen proposed reforms drafted by local activists. He agreed with some and disagreed with some, he said. He repeated statements he has made consistently about HPD exceeding training hour standards and being proactive about adopting improvements to its policies and procedures.

He named cities like Minneapolis, Baltimore, Louisville and Ferguson that have grappled with police misconduct and racial injustice and where similar conversations about these issues continue.

“All others are rushing for reforms, and they’re trying to catch up with Huntsville,” Battle said.