The U.S. Department of Justice in an amended complaint says the Alabama Department of Corrections and its leadership continue to fail to protect incarcerated men from physical and sexual violence and death, despite years of warnings from the federal government.

The DOJ on Wednesday filed an amended complaint, first reported by AL.com, in a December 2020 lawsuit against the state of Alabama and ADOC, which alleged violations of inmates’ constitutional rights to protection from prisoner-on-prisoner violence, sexual abuse and excessive force by prison guards.

The amended complaint includes updated deaths and instances of violence and removes one Alabama prison listed in the original complaint — Hamilton Aged and Infirmed Correctional Facility.

The original complaint followed DOJ reports released in April and July of 2019 that detailed systemic use of excessive force within Alabama’s prisons, and that Alabama’s prisons for men were likely violating inmates’ rights to protection from sexual abuse and physical harm.

“In the two years following the United States’ original notification to the State of unconstitutional conditions of confinement, prisoners at Alabama’s Prisons for Men have continued daily to endure a substantial risk of serious harm, including death, physical violence, and sexual abuse at the hands of other prisoners,” the amended complaint reads.

The DOJ in the amended complaint — signed by U.S. Attorney General Merrick Garland — describes the pattern of violence in Alabama’s prisons for men as “pervasive and systemic” and explains the state has failed to address the deep-seated problems since being notified in 2019.

“In May 2021, a 23-year-old prisoner was stabbed to death by another prisoner at Fountain. The victim was due to be released the next day,” the DOJ wrote in the complaint, referring to the stabbing death of Ian Rettig, first reported by APR.

From 2015 to 2020, the number of prisoner-on-prisoner homicides increased by more than 200 percent, from 5 to 16 homicides, although ADOC is also underreporting instances of homicides inside state prisons, misclassifying some and simply not reporting others at all, the DOJ notes:

“ADOC’s statistical reports do not reflect all deaths from prisoner-on-prisoner homicides. For example, in November 2020, a 48-year-old prisoner at Bullock was beaten and stabbed to death. Additionally, in February 2021, a 38-year-old prisoner at St. Clair was stabbed to death in an open dormitory. ADOC officials confirmed both deaths resulted from prisoner assaults in public news reporting, but they are not reflected in ADOC’s monthly statistical reports,” the complaint states. 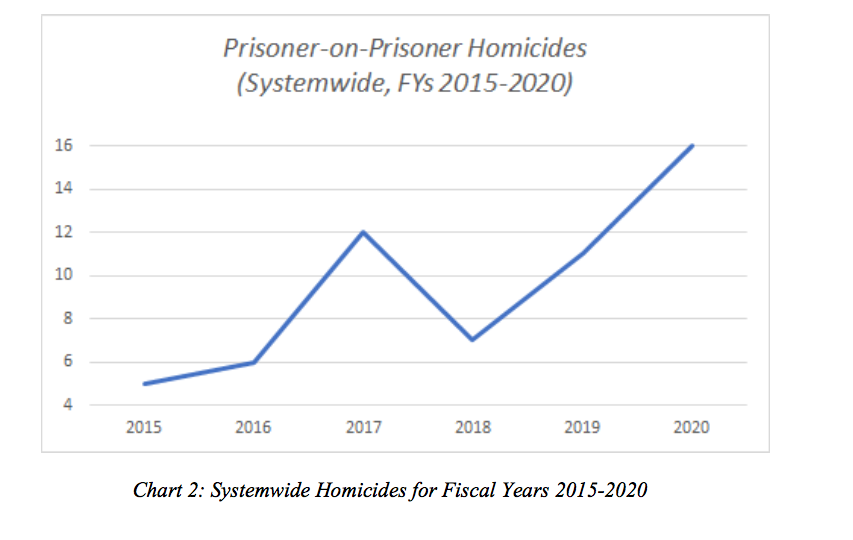 Acts of violence between incarcerated men continue to increase as well, and ADOC has failed to curb instances of extortion and violence over drugs, the complaint says.

“In August 2020, a prisoner at Easterling was taken to an outside hospital with serious burn wounds when another prisoner microwaved a mixture of baby oil, shaving powder, and coffee granules and poured it on the victim’s face and body while he was sleeping,” the DOJ wrote.

Inadequate staffing is driving the violence, the DOJ wrote, noting that a recent court order shows that fewer than half of ADOC’s staff positions are filled.

“As of the third quarter of 2020, ADOC had filled 1,322 of 3,326 positions for correctional officers,” the DOJ wrote. “The overall number of supervisors has decreased. Seven of Alabama’s Prisons for Men have total staff vacancy rates in excess of 50%, and all have at least 25% of staff positions vacant.” 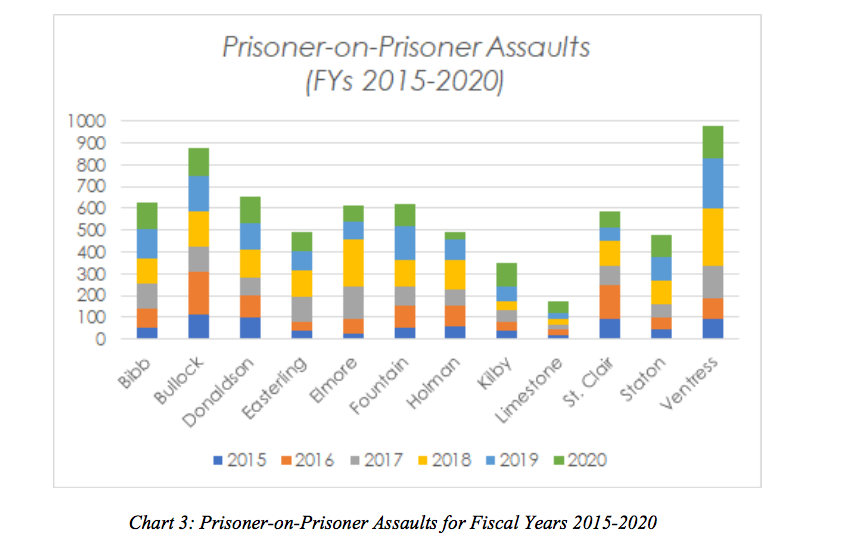 ADOC also hasn’t been able to control contraband, which is resulting in mounting overdose deaths, according to the complaint. ADOC also fails to accurately report overdose deaths as such, sometimes referring to them as “natural causes” in reports. The drugs continue to enter prisons despite no visits amid COVID-19 precautions.

The number of reported sexual assaults in Alabama’s prisons has skyrocketed between 2015 and 2017, increasing from approximately 140 to nearly 420 during that time, the complaint states.

“These numbers do not capture the full extent of the pattern of sexual abuse at Alabama’s Prisons for Men because many prisoners do not report sexual abuse when it occurs, if at all,” the complaint continues.

Violence at the hands of correctional officers also continues, despite warnings by the DOJ in 2019, according to the complaint.

Gov. Kay Ivey and ADOC Commissioner Jeff Dunn have for several years pushed construction of three new men’s prisons, saying the state’s current prisons weren’t built in ways that mitigate chances for violence, and new prisons would include room to expand rehabilitative efforts. The new prisons won’t solve prison overcrowding, Dunn has said, however. It’s not yet clear how many of the existing prisons will close if new prisons are built.

Ivey’s plan calls for the state to lease and operate two prisons, to be built and maintained by the private prison company CoreCivic. A third prison is to be built in Bibb County by Alabama Prison Transformation Partners, a team of developers, but negotiations for that deal are ongoing.

The DOJ notes Alabama’s deteriorated prison conditions and inadequate maintenance in the amended complaint, writing that ADOC has allowed for significant “physical plant-related issues in Alabama’s Prisons for Men that contribute to violence, including broken or defective locks, insufficient or nonfunctional surveillance cameras, and insufficient convex mirrors.”

The DOJ in those two 2019 reports, however, stated that while new prison facilities might help in some areas, new buildings won’t fully address the state’s widespread, deadly problems in its prisons.

Ivey’s prison plan has run into trouble in recent months, however. CoreCivic has struggled to secure financing for the Alabama prisons, with several underwriters pulling out of the project after mounting criticism. The Public Finance Authority, a Wisconsin-based financial entity that was set to issue bonds for CoreCivic’s Alabama prison build, also dropped out of the deal.

It’s not yet clear whether Ivey will call a special legislative session to address the prison crisis, or whether state legislators will agree to a bond issuance so the state could pay to construct its own prisons if CoreCivic fails to secure financing. The private prison company has until June 1 to secure that financing, according to the leases, signed by Ivey.

ADOC in a statement to APR on Thursday said that DOJ’s amended complaint was expected and that the state was pleased to see the DOJ’s willingness to reconsider the scope of facilities covered in the lawsuit, seeming to refer to the removal of the Hamilton Aged and Infirmed prison.

“The State remains, however, disappointed by the DOJ’s unwillingness to acknowledge the substantial investments and improvements made by the Alabama Department of Corrections (ADOC) with the additional resources made available by Governor Ivey and the Legislature,” ADOC said in the statement. “Moreover, the DOJ continues to rely upon anecdotal narratives of inmate-on-inmate violence, inmate-on-inmate sexual assaults, and other incidents that ignore the substantial time, energy, and resources the ADOC is devoting to: reducing violence levels among an extraordinarily violent population; increasing staffing levels in Alabama’s low-unemployment economy; and, improving living and working conditions in aging, dilapidated facilities.”

Carla Crowder, executive director of Alabama Appleseed Center for Law and Justice, said in a message to APR that nothing has changed.

“Nothing. It’s been more than two years since the first DOJ report shamed this state in headlines across the country. Elected leaders promised to address the crisis. Obviously that has not happened.  Instead, their nonchalance and inaction have allowed conditions to worsen and more people in state custody to die violent deaths or try to survive in shockingly inhumane conditions,” Crowder said.

Crowder said it is impossible to overstate the harm being inflicted on Alabama communities, families, and our future when more than 20,000 people are living through the kinds of terror laid out today by the DOJ.

“This complaint should be required reading by every elected official involved with Alabama’s criminal justice system and by every legislator. Their years of inaction say they don’t care. The abuse doesn’t matter,” Crowder said. “But tens of thousands of Alabamians are cycling through these prisons and returning home traumatized. Prisons conditions this bad have impacts far beyond the prison walls, and likely public safety impacts.”

Despite the prison crisis, Crowder said that a legislative session concluded Monday with no reforms that would reduce prison populations, provide sensible alternatives to incarceration, or assist people in re-entry.

Morgan Duckett, co-founder of Alabama Students Against Prisons, a group of nearly 400 college students across the state who oppose Ivey’s prison construction plan, told APR in a statement Thursday that the amended DOJ complaint further shows what many have known from the beginning.

“The atrocities in Alabama prisons stem from culture of violence created and upheld by ADOC management. The unconstitutional and inhumane conditions perpetuated under Commissioner Jeff Dunn are only getting worse,” Duckett said. “Our governor, attorney general, and every legislator refusing to take action against the ADOC is complicit in the escalated violence and death detailed in the complaint. It is past time for our elected officials to admit that the real problem is failed leadership, not buildings.”

The DOJ is asking the judge to declare that Alabama is depriving incarcerated men of their Constitutional rights and to order the state and ADOC from continuing the illegal acts spelled out in the complaint.