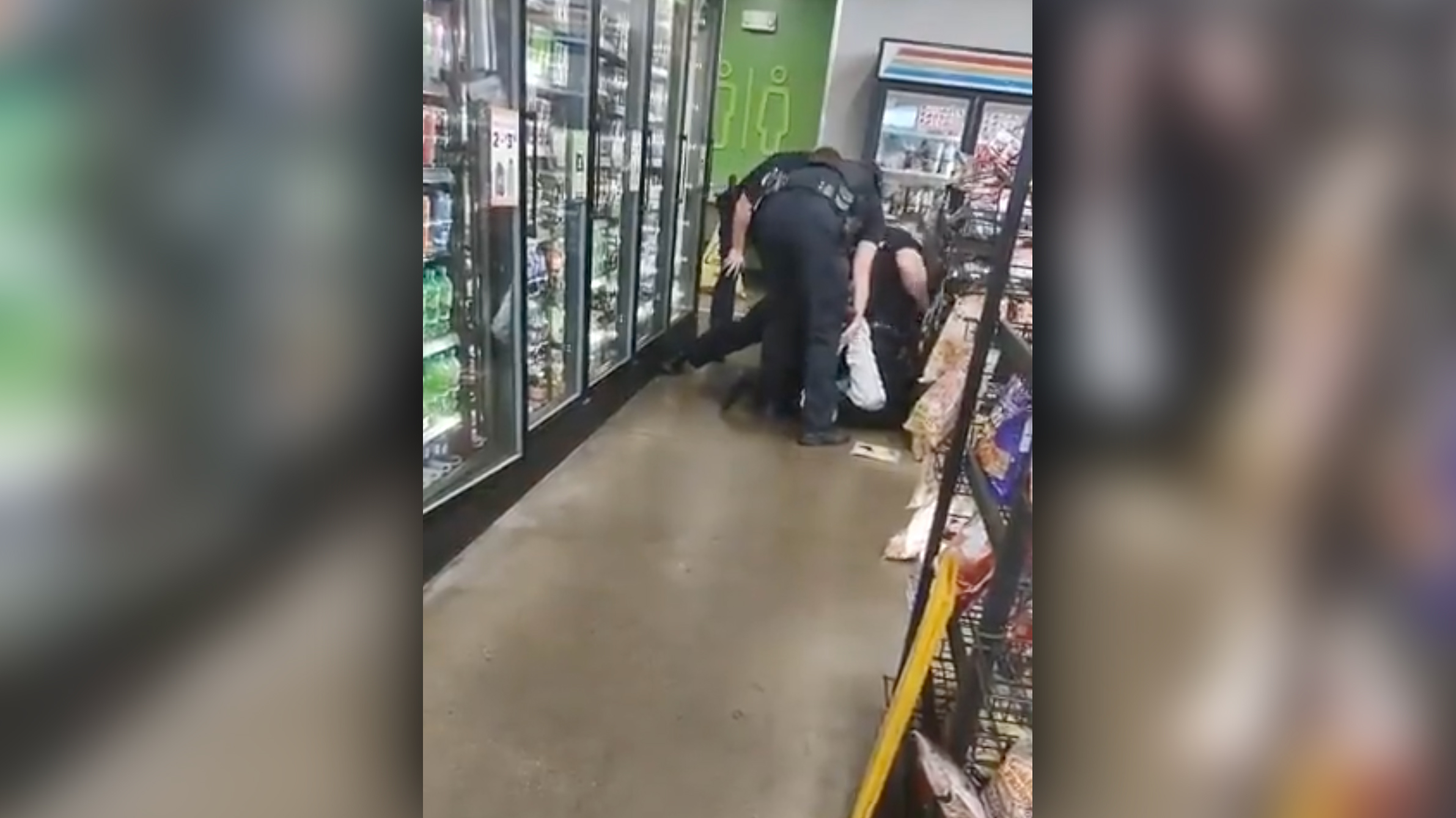 The video, taken at a MapCo store on University Drive, shows Huntsville Police officers attempting to arrest a man.

Huntsville Police are on the defensive yet again, as video from a violent arrest at a Huntsville gas station went viral on Sunday.

The video, taken at a MapCo store on University Drive, shows Huntsville Police officers attempting to arrest a man, who WHNT-TV, Madison County Democrats and other organizations later identified as 22-year-old Kemontae Hobbs.

One officer is seen wrestling with Hobbs on the ground and attempting to subdue him, as several other officers storm in. As the officers begin to aid in restraining Hobbs, one officer remains standing and begins to violently stomp on Hobbs’ legs as he’s laying on the ground.

Huntsville Police said on Monday that they are investigating the incident and would comment more fully in the coming days.

Why police were called to the MapCo is unclear, but Hobbs was only charged with the unspecific crime of “obstructing government operations,” and also resisting arrest. Groups seeking donations to raise bail for Hobbs said he was panhandling outside of the store, and that prompted the call to police.

The incident left some local elected officials confused and angry.

“My issue and why I am baffled is at the fact he storms in at the top and automatically goes to stomping,” Huntsville City Councilman Devyn Keith wrote in a Facebook comment under the video. “The other officers start to restrain and state (communicate). The original officer still in what seems to be body control … never throws a punch … the stomping officer never aides in control.

“Again, how do 3 other officers find it better to restrain rather than stomp … and if this is a situation where the officer on top was truly losing control … deploy the taser and then move on. This is reckless use of force by this officer, in my opinion.”

State Rep. Anthony Daniels, who represents the Huntsville area, said he could only comment on the brief video he viewed on social media, but that he was “disgusted by what I saw and look forward to a detailed response from our city.”

The incident is the latest in a string of black eyes for the police department, beginning, most notably, with its firing tear gas and rubber bullets at peaceful protesters last June. Most recently, the civil rights group The Rosa Parks Day Committee has called for both chief Mark McMurray and Mayor Tommy Battle to resign over their handling of that protest and their support of officer William Darby, who was convicted of murder more than three weeks ago. Darby remains on the city’s payroll and both McMurray and Battle have issued statements supporting him.

In the wake of the video showing Hobbs being stomped, The Rosa Parks Day Committee spokesman David Person said the video is just more evidence of the problems within HPD.

“This latest incident should be all that Mayor Battle needs to confirm the crisis Huntsville faces when it comes to policing,” he said. “It is beyond reprehensible that an HPD officer stomped a person whose only alleged crime was panhandling — a person who may have a disability. The culture of policing in Huntsville is broken. The police chief needs to be fired. And if the mayor can’t acknowledge that, he needs to resign.”