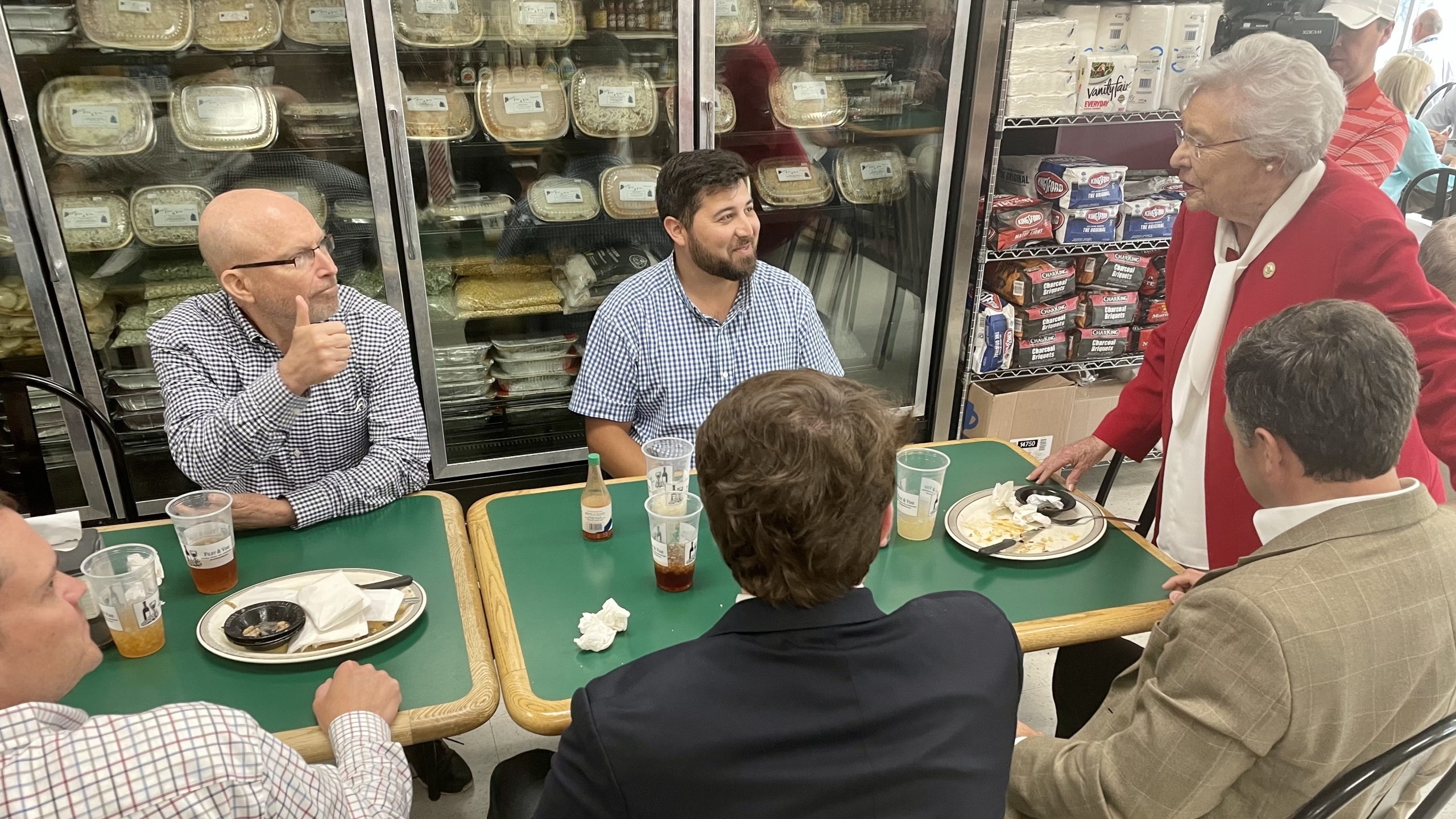 Gov. Kay Ivey meets with locals at Dirk's in Montgomery after announcing her re-election campaign. (VIA IVEY CAMPAIGN)

Ivey visited Derk’s, a local lunch staple, where she held a meet and greet with guests and then spoke to the media. Ivey has already reached out to the GOP donor network. Following her first campaign stop in Montgomery, the governor held a brief media availability to discuss her campaign and key message: “Alabama is working again, and the best is yet to come.”

“Over the last four years, Alabama has been put to the test,” Ivey said in an email to supporters. “We’ve seen a global pandemic wreak havoc on our way of life. We’ve seen natural disasters rip through the heart of our state. And now, we’re seeing a Democrat-run Washington out of step with our way of life that seeks to cancel those they disagree with. But here in Alabama, we don’t back down. Instead, we’ve treated these challenges as opportunities to show the world what Alabama is made of –– opportunities to move us forward, rebuild our state stronger, and solidify the conservative values that make Alabama, Alabama.”

“Together, we’ve taken our economy to new heights, improved the quality of education for our next generation, and worked to connect every corner of the state with new roads and bridges,” Ivey said. “I’m incredibly proud of what we’ve accomplished together, friend. But I know that our work isn’t done yet.”

“Alabama is working again, and the best is yet to come,” Ivey said. “That’s why today, I’m officially announcing my campaign for reelection to serve you –– and every Alabamian –– for four more years.”

“Many believe that defeating an incumbent Governor is difficult, but we are living in a unique time,” Odle said. “Freedom loving, patriots are calling for a return to our foundational principles and the U.S. Constitution. Governor Kay Ivey has made decisions over the last few years that shocked, infuriated, and disappointed many Alabamians. She made choices that violated the God-given rights of those she was elected to serve and protect and in doing so exposed the fact that she is not a true conservative.”

“Governor Kay Ivey admitted that it was a mistake to shutdown Alabama businesses during the Covid-19 pandemic causing many to suffer,” Odle said. “Had she been a leader instead of a follower, she would have listened to doctors like Yale Professor of Epidemiology Dr. Harvey Risch and Dr. Didier Raoult of France who is the top infectious disease doctor in the world. If Ivey had been a bold leader like Florida Governor Ron DeSantis, she would have encouraged the use of Hydroxychloroquine in order to save thousands of lives and prevent the shutdown of businesses, churches, and schools.”

“Even before the shutdown Governor Kay Ivey turned many true conservative Republicans against her because she pushed a gas tax increase that burdens the people of Alabama more each year,” Odle said. “Her handling of the prison issue in Alabama has been a disaster. Shockingly, Ivey’s solution was to sign a lease with Core Civic which has a history of mismanagement and abuse of inmates. Alabama can no longer afford these bad decisions.”

“Many Republicans that voted for Kay Ivey believing she was a true conservative have told me they will not be voting for her in the 2022 election,” Odle said. “Alabama needs a different kind of leader, one who is a true conservative and will do what is necessary to keep Alabama free.”

The Alabama Democratic Party released their own statement denouncing Ivey:

“Kay Ivey claims that Alabama has a “future brighter than any other in America,” but after more than a decade of total Republican control, Alabama consistently ranks at the bottom of nearly every list, whether it’s healthcare, education, or vaccinations,” the ADP said in a statement. “Kay Ivey has had four years to improve our lives, but just like the Republicans who came before her, she has done nothing to improve anyone’s lives unless they’re a millionaire or a politician.”

“We need a governor who will raise the minimum wage to $15, legalize marijuana, and stop spending billions of dollars of our money on new prisons while Alabama suffers,” the ADP said. “We need a governor who will fix our criminal justice system and reduce incarcerations, support our workers and raise our wages, and expand Medicaid – providing free healthcare to thousands of Alabamians. Over a decade of Republicans running Montgomery is long enough. We can’t afford four more.”

The last time that a Democrat won a gubernatorial race in Alabama was in 1998. Democrats have won only one statewide race in Alabama since 2008 when Doug Jones defeated Roy Moore in a 2017 special election.

Ivey is 76 years old. She was elected lieutenant governor in 2010 and re-elected in 2014. In 2017, she was elevated to the governor’s office when then-Gov. Robert Bentley resigned.