Juneteenth Day and Alabama's support of the Confederacy in conflict, historian says
Advertisement 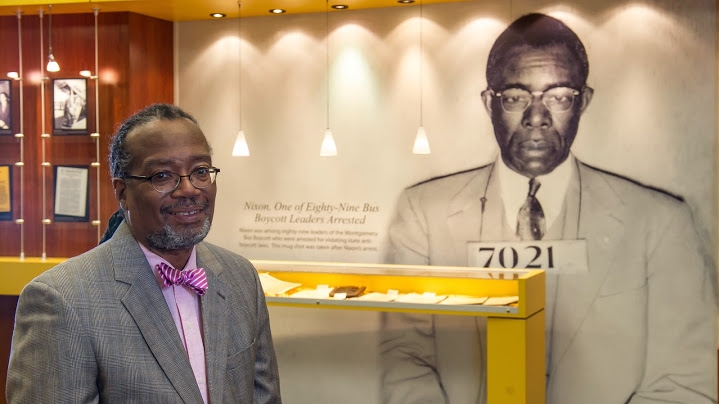 Derryn Moten, professor of history and chair of the history and political science department at Alabama State University.

When Governor Kay Ivey recently signed a proclamation recognizing June 19 of this year as Juneteenth Day, she was officially recognizing a celebration that honors the end of slavery in the U.S., and more broadly, ongoing work toward racial equality.

For Derryn Moten, a professor of history and chair of the history and political science department at Alabama State University, recognition of Juneteenth raises more questions.

Yes. Ivey signed that proclamation, honoring June 19, 1865, when a Union general read federal orders that enslaved people in Texas were then free, two and a half years after President Abraham Lincoln signed the Emancipation Proclamation.

Ivey’s support of the 2017 Alabama Memorial Preservation Act, which bars municipalities from removing or renaming monuments and memorials that have been on public property for 40 years or more, stands in stark contrast to the recognition of Juneteenth.

That law played a central role in fights between several Alabama cities and the state’s Attorney General, as those cities sought to remove Confederate monuments in the wake of the summer of protests and demonstrations following the death of George Floyd by police in Minneapolis.

Ivey’s proclamation wasn’t the first recognition of Juneteenth in Alabama, however. Former state Sen. Hank Sanders introduced legislation passed in 2012 that made Alabama the 40th state to observe Juneteenth.

Moten thinks the push by some to recognize Juneteenth as a federal holiday is a desire for the government to officially own up to its early support of slavery.

“And it’s clear, and it’s no exaggeration, both the federal government and the Confederate government supported slavery,” Moten said.

Moten noted the federal Constitution’s three-fifths clause, which held that, for the purposes of representation in Congress, enslaved Blacks would be counted as three-fifths of a person, and a 20-year moratorium on the importation of enslaved people.

“They had a difficult time outrightly objecting to enslavement,” Moten said of the framers of the Constitution.

“I think there are people who are pushing to have Juneteenth made a federal holiday, because again, it’s tantamount to having the United States government to fully recognize the government’s role in this institution.”

It can sometimes feel like it’s impossible to have an honest conversation about U.S. history, Moten explained, The same old inaccurate arguments get trotted out, that the South wasn’t interested in slavery, and the Civil War wasn’t fought over it.

Today, Republican lawmakers in Alabama and elsewhere — in the wake of Black Lives Matter protests and an upswell of support for racial equality and an end to police brutality — are drafting legislation to ban the teaching of critical race theory in K-12 schools, a practice that isn’t actually happening.

Critical race theory, a 40-year-old theory born by legal scholars and taught in some master’s level college classes, holds that racism is systemic, and not simply a construct held in individual people. The theory believes that racism is built into the legal system, and impacts people of color in many aspects of their lives, from schools to businesses to policing.

When AL.com’s Kyle Whitmire asked state Rep. Chris Pringle, R-Mobile, who has pre-filed a bill to ban critical race theory from being taught in public schools, what, exactly, critical race theory is, Pringle didn’t seem to have a good grasp of it and spoke of “reeducation camp” for adults and of the “radical left” trying to destroy the country.

Moten, who grew up in Northwest Indiana, says he understands why some Southerners hold on to those inaccurate versions of history, because the South was devastated by the Civil War. He teaches his students to know the full name of the Freedman’s Bureau, which is the Bureau of Refugees, Freedmen and Abandoned Lands.

“Because I want them to understand, or at least consider, that whites and blacks, but mostly whites in the South were refugees,” Moten said. “And I asked them to think about, what does it mean to be a refugee in a contemporary context?”

“So I’m saying all that to say that Southerners have been sore about what happened to the South, because of the federal government, for a very long time, and I don’t think that history, that collective history, has completely gone away,” Moten said.