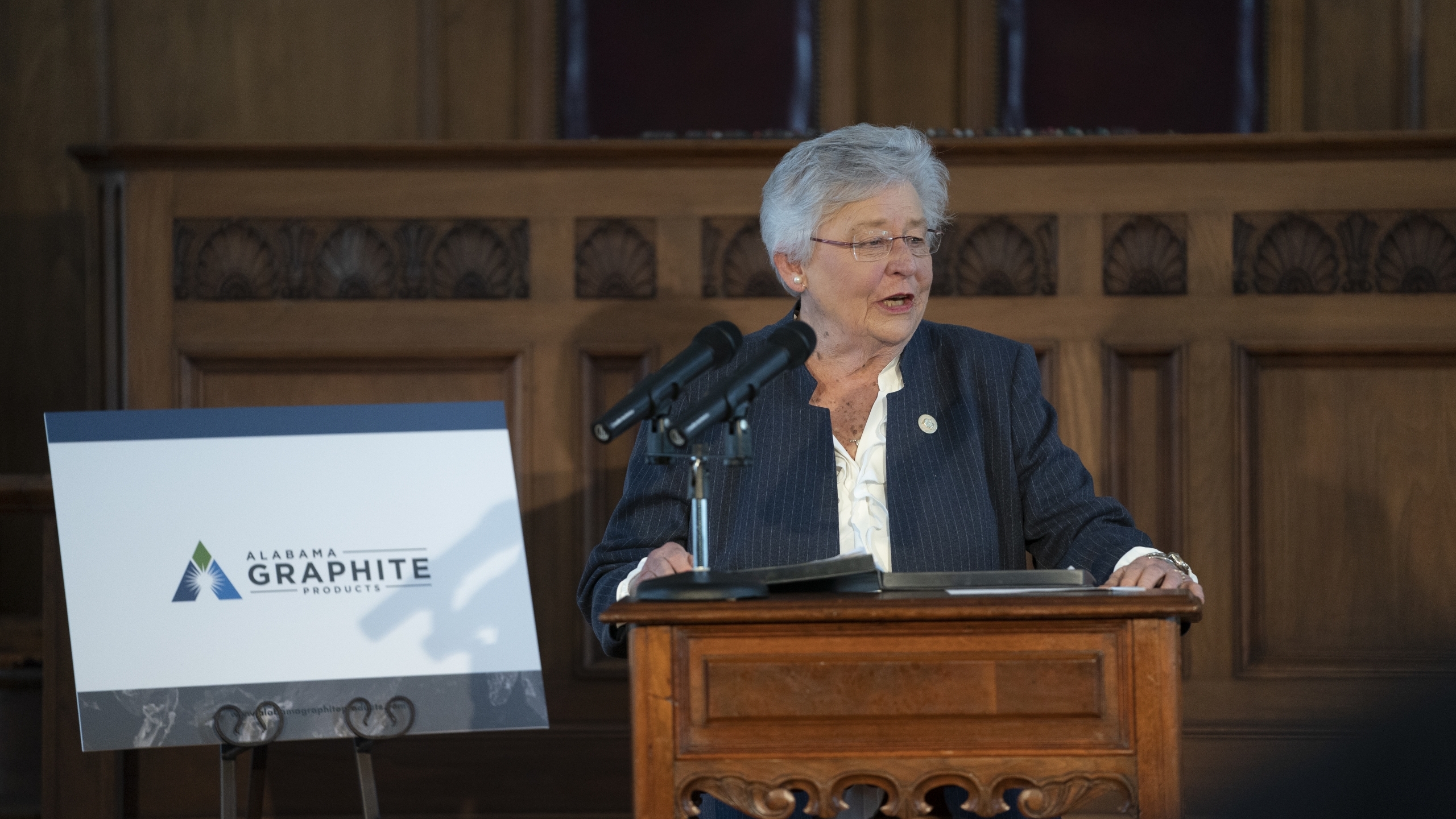 Governor Kay Ivey gave remarks at the Alabama Graphite/Westwater Resources Announcement Tuesday June 22, 2021 in Montgomery, Ala. Westwater Resources Inc. to announce their plans to build a first-of-its-kind advanced graphite processing plant in Coosa County, putting Alabama at the forefront in the production of an essential material in batteries that power electrical vehicles, electronics and other green energy products and equipment. (Governor's Office/Hal Yeager)

Ivey was joined by Westwater President and CEO Chris Jones at a ceremony in the Old House Chamber at the State Capitol in Montgomery on Tuesday to announce the project. Also present were Commerce Secretary Greg Canfield, state Sen. Clyde Chambliss, Alexander City Mayor Woody Baird and representatives of the Coosa County Commission and the Lake Martin Area Economic Development Alliance, as well as members of the Alabama Graphite Products team.

“This plant not only will make Alabama the U.S. leader in graphite production, the go-to place for this important resource in battery manufacturing, it also will elevate our standing even more as a major player in the fast-growing electric vehicle sector,” Ivey said. “We’re home to four major auto plants, and the ability to source precious materials in state for the lithium-ion batteries used in electric and hybrid vehicles will be a big plus in attracting other manufacturing jobs to the state.”

The Coosa County graphite plant is expected to employ at least 100 full-time, permanent workers. Those jobs will pay an average hourly wage of $21.15.

“I want to thank Governor Ivey, Secretary Canfield, other state leaders and the many local officials in Alexander City and Coosa County who worked with us to make this vision come true,” Jones said. “The people of Alabama have been very welcoming since day one, and their cooperation has been integral in putting together the many pieces needed for us to build this innovative plant in Alabama. We look forward to being an active member of the business community here for many years to come.”

Graphite is a key component in lithium-ion batteries, as well as a conductivity enhancer for all types of batteries, including the common lead-acid batteries in traditional internal combustion engine vehicles.

“This is a great project for Alabama for many reasons,” Canfield said. “It complements perfectly our auto industry and what these automakers are doing with EVs here in Alabama. Mercedes and Hyundai have announced major expansion projects specifically for the manufacturing of electric vehicles. Plus, these are well-paying, sustainable jobs that will spur additional economic development and even more jobs in the area.”

Westwater says that its Alabama Graphite Products LLC subsidiary will make an initial investment of $80 million or more to build the graphite processing plant in Kellyton, near Alexander City. A second phase of the project could push the total investment to $124 million.

Colorado-based Westwater is a mineral resources company committed to exploring and developing materials for clean, sustainable energy production. The company says that construction will start later this year, with the graphite processing plant operating by the end of next year.

Economic developer Nicole Jones said: “Metals and advanced materials is one of the state of Alabama’s targeted business sectors, and Westwater Resources-Alabama Graphite Products LLC made history today by making our state home to the first large-scale production facility for refined graphite in the United States. The Coosa County plant will provide substantial economic benefits locally, statewide, and nationally. Alabama-based automotive manufacturers such as Mercedes and Hyundai will benefit in the future because the graphite can be used in their batteries. From a national security standpoint, the facility will be an asset because it will help decrease our dependence on foreign nations such as China for raw graphite.”

The state of Alabama has prioritized economic development projects in rural counties like Coosa and neighboring Tallapoosa, which were hit hard economically by the Great Recession but have not enjoyed the robust growth seen in other, more populous areas of the state, resulting in population declines.

Local governments are also contributing $4.7 million in incentives and tax abatements as well as providing use of 80 acres at the Lake Martin Industrial Park at no cost. The governments have also agreed to build a new bridge to provide additional access to the industrial park.

“Attracting an operation like this means a great deal to the region,” Coley said. “I can’t praise enough the multi-jurisdictional effort led by our staff, Executive Director Chad Odom and Assistant Director Denise Walls. Their creativity, knowledge and use of local, state and federal resources made this possible. The mayor of Alexander City, the City Council, city staff and the Coosa County Commission also are to be commended for their efforts to overcome various infrastructure challenges and make investments that secure the region’s economic future.”

In addition to making Alabama home to the first large-scale producer of refined graphite in the U.S., Alabama Graphite plans to mine raw graphite in western Coosa County in part of what was known as the “Alabama Graphite Belt.” Westwater Resources acquired mineral rights to 42,000 graphite-deposit-rich acres in 2018 and expects to begin mining operations by 2028.

Alabama Graphite’s processing plant will produce approximately 7,500 tons of battery-grade graphite a year initially, eventually expanding to 15,000. The battery in an average EV needs about 175 to 200 pounds of graphite. Each one of Ford’s new electric F-150 pickup trucks, the Lightning, will need 450 pounds of graphite.

Westwater’s Jones noted that the U.S. government has declared graphite critical to the nation’s economy and national security.

“All of the graphite used and needed in the United States, including by America’s auto industry, is imported,” Jones said. “Most of it is from China, where media have reported both worker and environmental issues. Domestic production of graphite reduces our dependence on foreign sources. Even though the raw graphite we will process into battery-grade material will be imported initially, none of it will be from China. We have secured agreements from other providers.”

There are presently 287 million cars in the use, the vast majority of them fossil fuel-burning internal combustion engine-powered vehicles. Converting that fleet over to EV-powered vehicles will take 28.7 million tons of graphite alone.

Alabama Graphite will use a proprietary process to purify the raw graphite and refine it into battery-grade purity. The company claims that that process is safer and more environmentally friendly and sustainable than the hydrofluoric acid-based process commonly used in China and elsewhere, which use more water and produces more environment-damaging byproducts.

“One of our core values is safety. We’re protective of our workers, the community and the environment,” Jones said. “Whether it’s mining or processing graphite, our company is committed to doing it in an environmentally safe, sustainable manner. The biggest virtue of electric vehicles and other battery-powered products is they reduce carbon emissions and are better for the environment. Producing the key materials for those batteries, we believe, can and should be done in an environmentally responsible way as well.”

The Lake Martin area is one of the state’s top recreational areas for outdoor activities like boating, fishing and hunting. 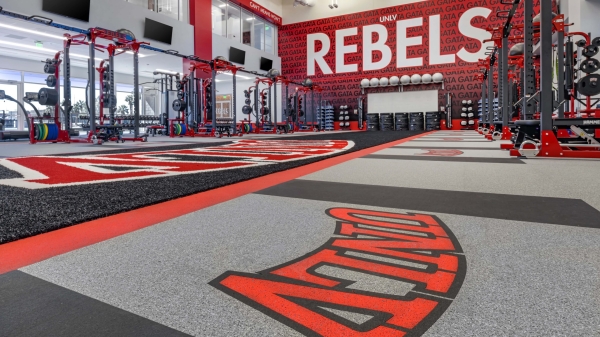