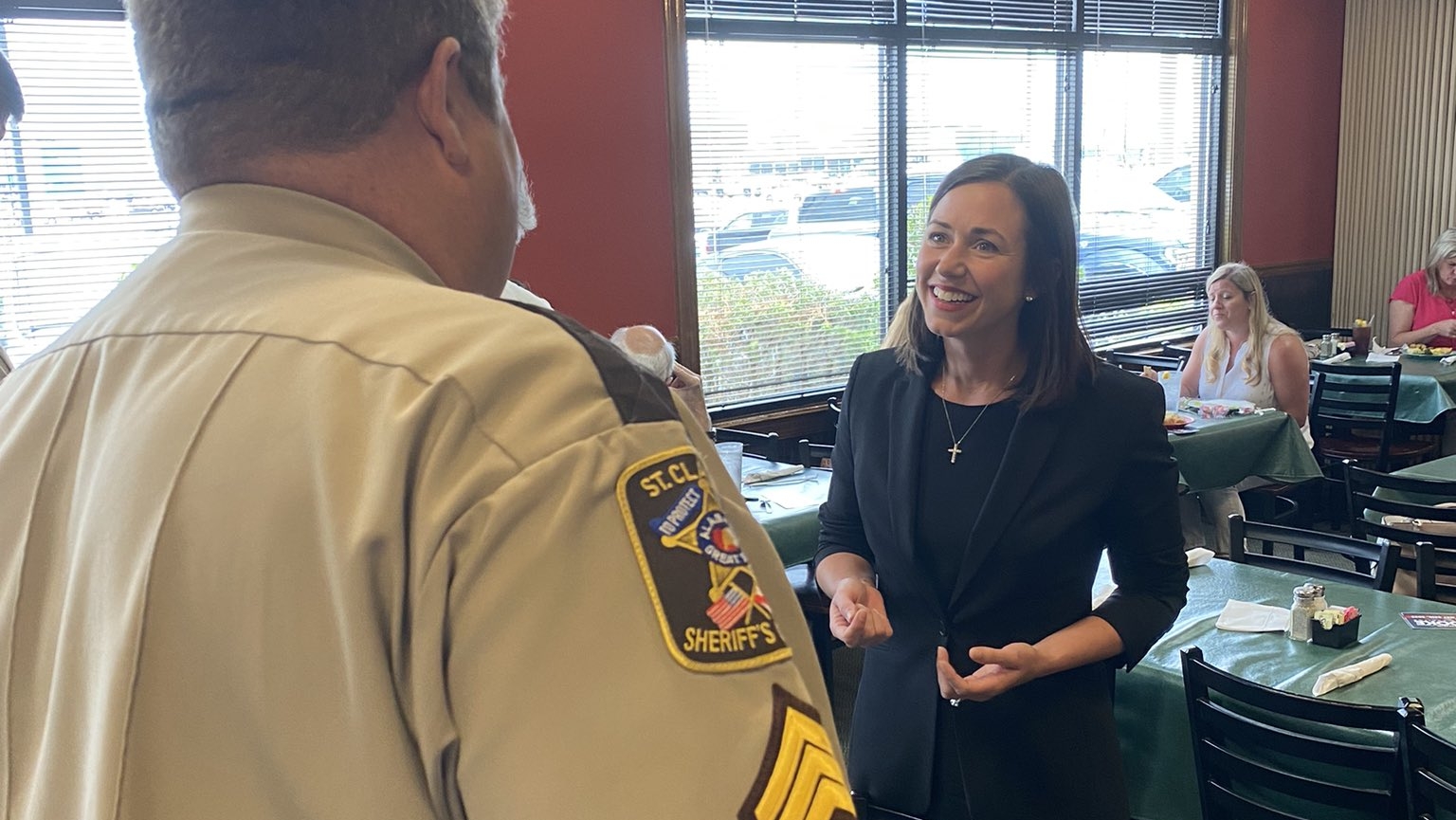 U.S. Senate candidate Katie Britt spoke to a crowd of more than 80 people on Thursday at the St Clair County Young Republicans at their June meeting at the City Market Grill in Pell City.

“We really prayed for it for weeks and months,” Britt said of the decision to run for U.S. Senate. After much prayer, Britt said that she and her husband, Wesley, reached the conclusion that “there is too much at stake” not to run.

Britt is a former CEO and president of the powerful Business Council of Alabama. She also served two years as chief of staff for Sen. Richard Shelby, R-Alabama. Shelby is retiring at the end of his current term, and Britt is running for the Republican nomination for Senate.

“We believe if this generation does not stand up for the next generation there won’t be another,” Britt said. “My son said, ‘We need you momma,’ and my daughter said that ‘God will stand with you.’”

Britt is from Enterprise in Coffee County, and her husband, Wesley, is from Cullman County.

“I am so proud to be from the Wiregrass,” Britt said. “It is the values that are instilled in you,” she said of growing up in rural Alabama.

“Faith, family, and freedom,” Britt said. “Fort Rucker is right there. You can literally see freedom flying over you. I had classmates in school whose parents were gone on deployment. You learn that it is not just their sacrifices, but it is the sacrifices of their whole family.”

Britt said that she and Wesley enrolled back in school at the University of Alabama following the end of Wesley’s NFL career.

Wesley is a former University of Alabama football player who later played for the New England Patriots in the NFL. He worked until recently for the Alabama Power Company.

They were living in Tuscaloosa when the massive tornado struck the city on April 27, 2011.

“Our House and cars were all gone,” Britt said. “Wesley was hit in the head by a Bible. I think God was trying to tell him something.”

Britt denounced the elections reform law HR1 that would outlaw voter ID as “a disaster” and “a liberal power grab.”

“Cancel culture it is real,” Britt said, and cited the example of a Mississippi school child who was “wearing a mask (at school) that said ‘Jesus loves me.’ They made her take it off.”

“We are 49th and 52nd in education,” according to USA Today, Britt said. “If you are like me and did not know you could even get to 52, but if you Google it, they include the DoD and Puerto Rico.”

“Encounters are up 675 percent at the border,” Britt said, bemoaning the crisis on the southern border that Republicans say is due to the Biden administration’s mishandling of the situation. Britt said that law enforcement is encountering 40 hardened criminals a day and 3,777 pounds of drugs every day at the border and added that law enforcement members in the room can tell you about all the drugs and criminals that are not being intercepted.

“We need to put Trump’s policy of remain in Mexico back in place,” Britt said.

Britt blamed the weakness on the part of Biden for the worsening crisis.

“China is stealing $675 billion in intellectual property every year,” Britt said. “The cyber attacks that are happening. Again this is what happens when you do not show strength.”

Britt denounced the “Iranian backed Hamas terrorists” that showered thousands of rockets on Israel and denounced Sen. Bernie Sanders and Congresswoman Alexandria Ocasio Cortez for making it a political issue when “Israel wanted to buy back $775 million in missiles to replenish the Iron Dome.”

Britt said that she was opposed to expanding the U.S. Supreme Court.

“It is repulsive that Joe Biden changed the Mexico policy so that our tax dollars go to fund abortions overseas,” Britt said. “We have to stand up for the unborn.”

“We are ready to fight to make sure that our Christian conservative values are protected,” Britt said.

Britt said that businesses have not been “able to get people to come back to work. That is Democrats working to change the fabric of our nation.”

“$21.87 an hour you can get paid to stay at home,” Britt said, when you tabulate all the benefits offered to the not working.

“We need 500,000 highly skilled workers,” Britt said. “How do we fill that gap to continue to move Alabama forward?”

Britt also discussed the opioid crisis and cited the 97 prescriptions written for opioids per 100 people in Alabama as another problem.

She also said that mental health is an area that the state needs to address.

“We need to make sure that we are getting people the resources they need to be successful,” Britt said.

“I want to be a senator who is not just from here, but who is for here,” Britt said.

“My biggest challenge is name ID,” Britt said. “I have one opponent who has been running for office for 40 years and one who can self-fund.”

“I want to make a difference in DC,” Britt said. “I am not going to just identify problems. Anyone can do that. I am going to be the kind of leader that can move the needles.”

“No one will work harder,” Britt said. “We have got 11 months to the day before the election. If we can get in front of people they will see that I have the energy and the passion to work for them.”

Glass thanked Britt for speaking to them.

“Chairman Ren Wheeler really looked forward to being here, but he is in the hospital,” Glass said. “Please keep Ren in your prayers.”

Glass gave a report on the state convention of the Alabama Young Republicans.

“It was a blast,” Glass said. “We had a great time networking. I would like to thank Chairman Dalton Dismukes for making that happen.”

“We got to meet the Governor and have pictures taken,” Glass said. “Our Goal is to make this the premier Young Republican Group in the state.”

Glass said that the next meeting of the St. Clair County Young Republicans will be on Aug. 5 at the Pell City Steakhouse. The special guest will be state Rep. Wes Allen, who is running for secretary of state.