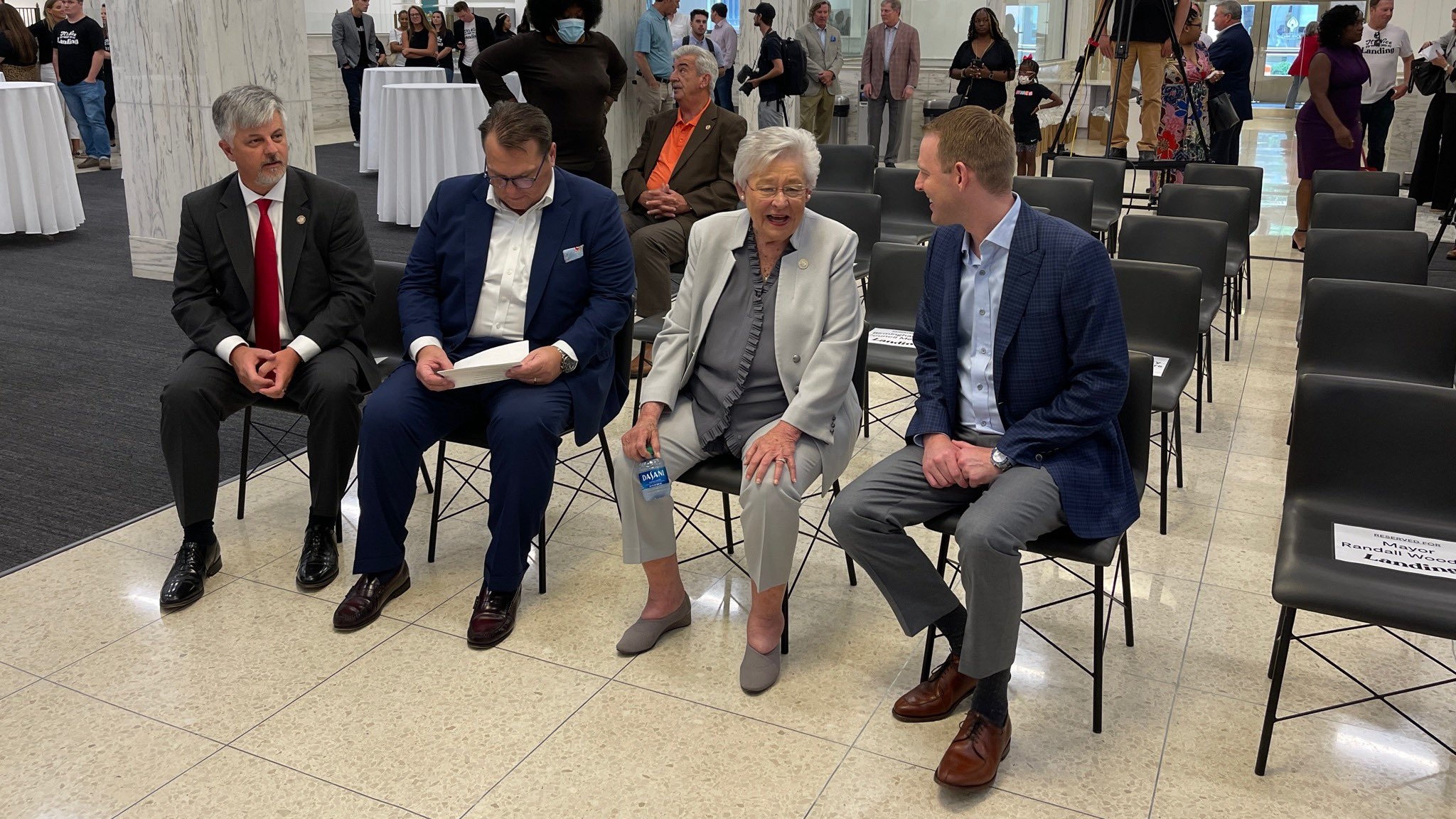 Alabama Governor Kay Ivey on Thursday joined dignitaries from the government and business communities to welcome Landing to Birmingham. Landing, a tech company, is moving its corporate headquarters from San Francisco to Birmingham.

“We are delighted to welcome Landing to Alabama,” Ivey said. “We hope this is a message to the citizens of Alabama and people everywhere that we, as a state, are focused on driving innovation and opportunity.”

Ivey said that Landing will bring more than 816 jobs to Birmingham.

“I can not think of anything more exciting,” Ivey said. “This will not only impact this region; but the entire state of Alabama.”

“816 Alabama families will be impacted by this decision,” Ivey said.

“2020 was a doozie, but the one thing I could count on was the support of the people in this room,” Ivey said. “We are heading back down to record low unemployment. It is now 3,3 percent and we are producing the best economy of all fifty states.”

“Despite the pandemic, we are stronger than ever,” Ivey said. “Alabama is not only open for business, but it is a great place to start a business.”

Bill Smith is Landing’s founder and CEO. He is a native of Birmingham and also the founder of grocery delivery company Shipt, which is also based in Birmingham.

“Landing has seen incredible growth since the company launched in 2019, and we couldn’t be more excited to share that success with Birmingham,” said Smith. “We are proud to be part of one of the fastest-growing tech hubs in the country, bringing new jobs and economic opportunity to the region.”

“This is an exciting day,” Smith said. “I am just thankful to have the opportunity to build another business like this.”

“You would not believe the talent we have on our team at the Landing,” Smith said. “Birmingham really has a thriving technology center.”

“Five years ago we really did not have any venture investors. now I can name several,” Smith said. “We are really excited about joining this ecosystem.”

Smith said that everyone in the Birmingham business community is supportive of new ventures, from individual businessmen to large corporations like Alabama Power, which “has really contributed to economic development in this area. They make it really attractive to locate a business here.”

“We want other companies to come to Alabama and create jobs,” Smith said. “When we recruit someone from San Francisco to come here we want them to be able to work at ten other companies that are here.”

“The City of Birmingham has been so supportive of all of our efforts,” Smith said, thanking Mayor Randall Woodfin, Commissioner Steve Ammons and the rest of the Jefferson County Commission, Ivey, the Alabama Department of Commerce, and the Birmingham Business Alliance for their support in this move.

“We are a rapidly expanding tech hub here in the Magic City,” Woodfin said. “It’s fitting that Bill is again a part of growing our technology industry, as Shipt propelled Birmingham’s tech reputation and now Landing continues that growth with elite recruitment and training opportunities. Birmingham is quickly becoming a destination for some of the top tech talent in the country, and this significant investment by Landing will continue adding to our ever-growing workforce.”

Thank you for tripling down on investments promoting Birmingham

“We are happy to welcome the Landing,” Woodfin said. “The revenue generated by this project will help not only the City of Birmingham’s infrastructure; but the Birmingham City Schools.”

“The entire world descends on Birmingham in less than 365 days,” Woodfin said speaking of the 2022 World Games. “3,600 athletes from countries all across the world.”

Woodfin said that the World Games will spotlight the city of Birmingham and its current positive reality versus some of the negative perceptions that people may have of Birmingham from its past and that Shipt and Landing are part of that new present reality.

“Landing’s move to Birmingham offers us a chance to showcase Jefferson County,” Ammons said. “We are proud to continue supporting businesses that bring jobs to Birmingham from around the country, and particularly those that invest proactively in tech talent and ecosystems.”

“It is a thrilling day for us to launch the Landing,” Ammons said.

Ammons said that the Jefferson County Commission has been working on “diversifying our economy and technology is one of those areas where we feel that we have an excellent opportunity for growth.”

Ammons thanked Bill Smith for both Landing and Shipt, “They provided us an opportunity not just for jobs but for an enhanced quality of life.”

Economic developer Nicole Jones said: “CEO Bill Smith, founder of The Landing and Shipt, epitomizes the concept reinvesting in your local community. During his opening remarks, Mr. Smith announced that The Landing will donate one million dollars to Alabama’s technological ecosystem. The company also plans to invest in a workforce development program aimed to cultivate new business owners. Alabama is grateful for Bill Smith and the hundreds of employees.”

Smith also announced that Landing will make a $1 million investment in TechBirmingham, which will be used to continue to nurture the city’s booming technology and innovation community by developing top tech talent across the region and attracting high-potential tech startups.

Smith announced that alongside their recruitment efforts, Landing will launch Landing Fellows, a two-year, advanced fellowship program for early-career applicants, recent grads and career changers who will work full time in Landing’s Birmingham headquarters. Recruitment for this fellowship program will start in the Birmingham area in the fall with the program launch slated for summer 2022.

“The greatest force for change is a good job,” said Birmingham Business Alliance President Ron Kitchens. “The addition of Landing and Landing Fellows is a huge win for Birmingham.”

“We cannot wait to continue growing Birmingham as a haven for businesses and a destination for some of the top talent in the state and the region,” Kitchens said. This is one of the largest corporate headquarters relocations to take place in the country this year and one of the largest over the last three years.

Kitchens acknowledged that the state, county and city had offered Landing some economic incentives but that the additional payroll is producing a “356 percent return on investment. This is what happens when the government comes together with business to make sure that good high paying jobs come to this community.”

Landing personnel toured Jones and others around the facility, which showcased the company’s interior designs.

Jones explained that the concept allows for short-term residential rentals “with a cozier, homier feeling than a hotel,” as one employee pointed out. Jones said that “Landing helps accommodate residents during many transitions in life – career, school, family, looking for a home, etc. Folks can rent out an apartment unit for as little as 30 days to a year or longer and can transfer to any of the properties The Landing owns.”

Landing offers its members an industry-first all-inclusive, flexible living experience via a subscription. Members have access to a network of carefully curated furnished and unfurnished apartments with an on-call concierge service and a host of additional amenities. Landing apartments are currently available in over 200+ cities across the United States and growing.

The company said in a statement that it is committed to being a leader in the evolution of Birmingham’s workforce and the city’s booming technology industry.

Birmingham was recently recognized as one of the top 10 metro areas in the country for month-over-month tech job postings in the first half of 2021.