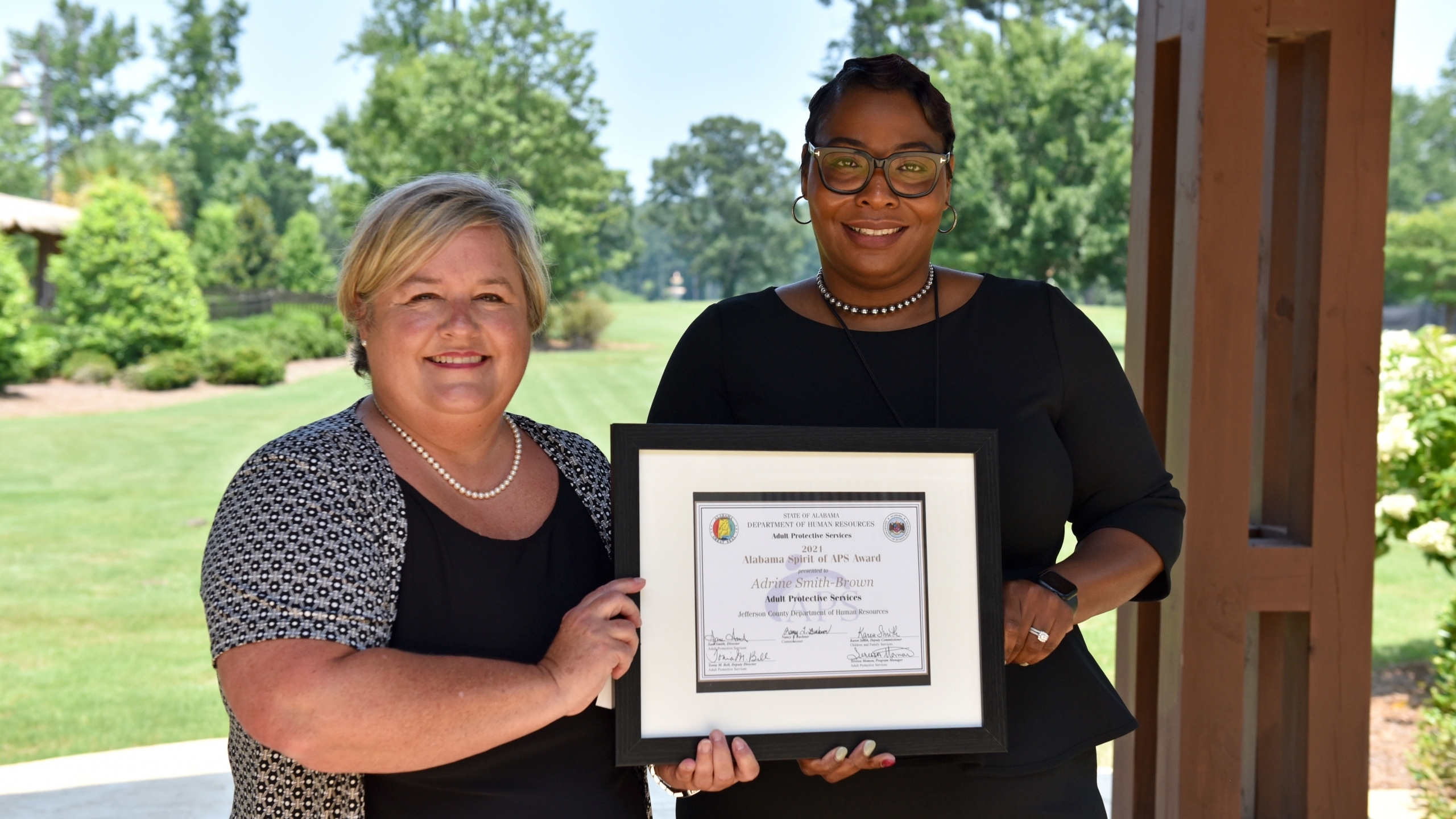 The Alabama Department of Human Resources announced Monday that Adrine Smith-Brown, a social worker with Jefferson County DHR, is the recipient of the 2021 Alabama Spirit of Adult Protective Services Award.

The award is presented annually to a front-line worker who, through his or her own initiative and innovative ideas, makes substantial contributions to the growth and development of the APS program. As the Spirit of APS Award recipient for Alabama, Smith-Brown is nominated for the Spirit of the National Adult Protective Services Association (NAPSA) Award, which will be presented in November 2021.

Smith-Brown has spent 14 years with Jefferson County DHR, beginning her service in 2007 as a child welfare social worker. Specializing in sexual abuse cases, she assisted law enforcement and the Jefferson County District Attorney’s Office with the successful prosecution of abuse cases involving children.

Since transferring to the county’s APS unit in 2014, she has investigated numerous exploitation cases that led to criminal charges against wrongdoers who preyed on vulnerable adults. Many of these cases resulted in convictions.

Alabama DHR Commissioner Nancy Buckner said: “Elder abuse is a devastating crime that often leaves victims suffering in silence. Adrine Smith-Brown is a powerful voice for the vulnerable who breaks this silence by exposing abusers and restoring dignity to victims. We are honored to recognize Ms. Smith-Brown for her contributions to adult protective services, which have had a resounding impact in Jefferson County.”

Colleagues describe her as an assertive advocate for the vulnerable who displays remarkable innovation in her efforts to protect at-risk adults and help them remain in their homes or in the least restrictive environments possible.

Jefferson County DHR Director Francine Fenderson said: “As Alabama’s most populous county, Jefferson County is fortunate to have social workers like Adrine Smith-Brown, who lead by example. She is truly committed to our mission and inspires those around her to go the extra mile. We are proud to have her on our team.”

Smith-Brown remains active in the community outside of work by leading her church’s youth group. During the holiday season, they donate care packages, deliver gifts to nursing home residents and go Christmas caroling.

She holds a bachelor’s degree in psychology and social work from the University of Alabama at Birmingham and a master’s degree in public health with an emphasis on maternal and child health from Grand Canyon University. She is currently pursuing a law degree at the Birmingham School of Law.