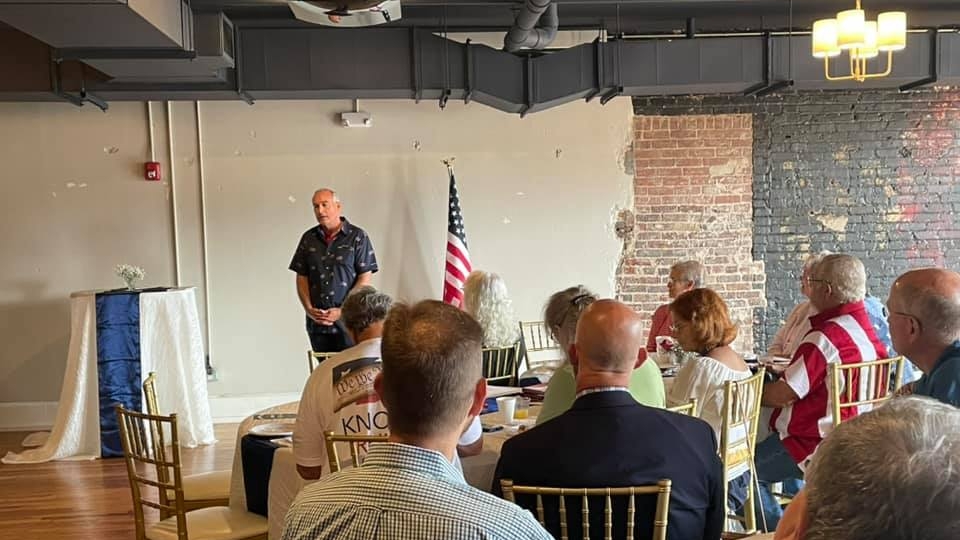 Congressional candidate Casey Wardynski on Saturday spoke to the Shoals Republican Club at the historic Stricklin Hotel about his campaign for the Republican nomination for Alabama’s 5th Congressional District.

“I graduated from West Point in 1980,” Wardynski said. “President Carter was a tota; disaster, and then there was Reagan. What a change leadership makes.”

“I never thought we would get another Reagan; but we got something better: we got Trump.” Wardynski said.

Wardynski served in the Trump administration in the Pentagon as an undersecretary of the Army.

“The U.S. Army was in a bad way after 20 years of endless war,” Wardynski said.

Wardynski said that he retired from the Army as a colonel. After that he was superintendent of the Huntsville City Schools.

Incumbent Rep. Mo Brooks is running for Senate so will not be seeking a seventh term in the 5th Congressional District.

Wardynsik said that the Republicans need to retake both the House and the Senate in 2022, but that the GOP should not repeat the mistakes of the past.

“We can’t have weak Republicans again,” Wardynski said. “No more RINOs (Republican In Name Only).”

“For two years we asked Paul Ryan and Mitch McConnell to build the wall and they failed to find the funding even though Republicans controlled both Houses of Congress,” Wardynski said. “Mo was a strong Republican.”

Wardynski dismissed his primary opponent, Madison County Commissioner Dale Strong, as a “weak” Republican who has spent years in government. “I got no support from him when I was challenging the desegregation order,” when Wardynski was schools superintendent.

Wardynski disputed the testimony of an Army colonel who stated than Jan. 6 was about “white rage.”

“Frankly he was a liar,” Wardynski who was in charge of manpower for the Army retorted. “There were only 35 white supremacists in the Army.”

Wardynski maintained that the Army does not have a problem with white rage or white supremacists.

“Jan 6 was not about White Rage,” Wardynski said.

Wardynski blamed the mayor of Washington D.C. for both the events of Jan. 6 and the riots in June 2020.

Wardynski maintained that on Jan. 6 she said that she did not want a military presence in the city so resisted calls to have the national guard there and on June 20 she refused to sign the order to bring in the national guard to put down the riots following the death of George Floyd.

Wardynski said that the army had to move elements of two divisions to quell the D.C. riots in June because the mayor of Washington would not sign the order to call in the National Guard.

“That Mayor made all of that happen,” Wardynski said. “She had been offered anything and everything by the department of Defense.”

“They (the Left) planned demonstrations in 400 cities,” Wardynski said if Donald Trump had been re-elected.

“Our government is in bad shape and our military is part of it,” Wardynski said.

Wardynski said that Trump’s presidency was undermined by members of the CIA, FBI, military and federal bureaucracy that opposed his actions at every turn.

“They needed to destroy President Trump because they are scared of him and do not want him to run again,” Wardynski said.

Wardynski said that he had been tasked with freeing up military resources to build Trump’s border wall.

“We got 450 miles built by Christmas,” Wardynski said. “It brought down illegal immigration by 90 percent. Walls work.”

Wardynski expressed his concerns about the COVID vaccine.

“They are getting ready to force military folks to get the vaccine,” Wardynski said. “I have got three kids in the military. My daughter is pregnant. I asked my daughter if she had taken it. She said Yes dad the Army says that it is safe.”

Wardynski argued that the military can not require a soldier to take a vaccine that has not been approved by the FDA and that they can be required to take a vaccination only in deployment of a named operation.

Wardynski urged those soldiers with concerns about the vaccine to continue to refuse to take it even if ordered to do so.

“This area is very tied to defense spending,” Wardynski said. “The Army is getting ready to take a beating.”

Wardynski maintained that if the Army has to take cuts that it should be done in a smart way without hurting readiness.

Wardynski said that if governments would cut off the funding for universities that teach CRT it would go away. The president would have implemented this plan if he been elected to a second term.

It was announced that gubernatorial candidate State Auditor Jim Zeigler will be in the Shoals area for a series of events on Thursday and Friday morning.