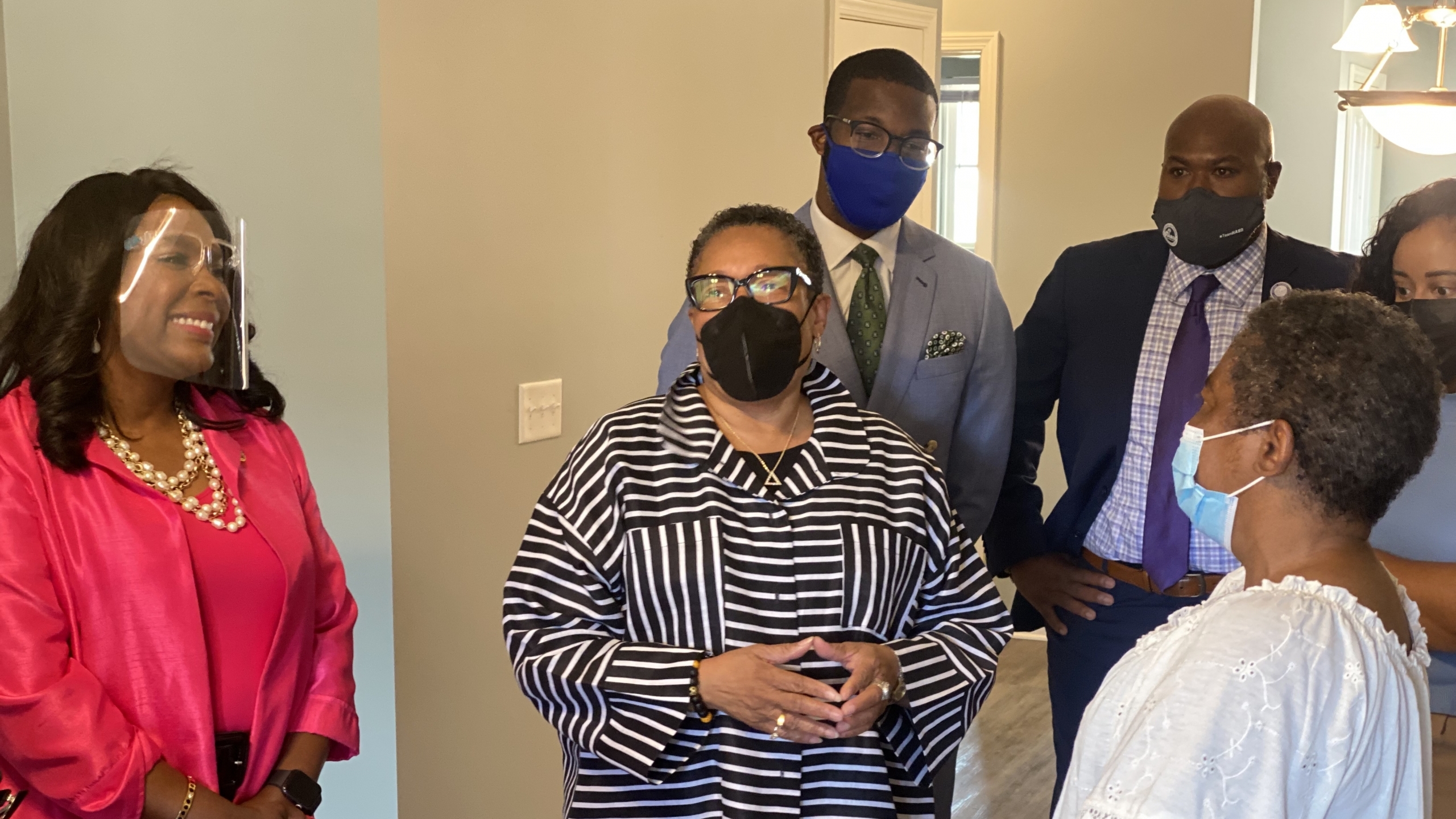 “I am proud to host my friend and colleague in today’s tour and visit throughout Birmingham so that she can see how far we’ve come,” Sewell said. “As Secretary, she just toured the villas right here in Titusville and we are very proud of this new development. But as Mayor Woodfin said and we all know, there’s still much work to be done right here in Birmingham and we could use more federal resources to do that work!”

“As the only member of Alabama’s Congressional Delegation to vote in favor of the American Rescue Plan, here’s what I know for a fact. I know that the people I represent need as much assistance as possible to thrive on the other end of this pandemic,” Sewell said. “I’ve heard them. Mayor Woodfin has heard them, and the Biden Administration has heard them and that is why I am happy to stand here with Secretary Fudge and say that MORE HELP IS ON THE WAY!”

“That means more money,” Sewell said. “As we recover from the COVID-19 pandemic, President Biden, his cabinet, and Congressional Democrats have laid out a bold vision for our nation — one that will help us not just return to the way things were, but instead to Build Back Better, stronger, and more EQUITABLY than before. As President Biden said himself, the best way to grow our economy is from the bottom up and the middle out, and that’s EXACTLY what we’re doing with the American Rescue Plan resources.”

“The City of Birmingham Alabama received 140 million dollars from the American Rescue Plan and I know that the Mayor and the City Council are hard at work making sure that those resources are there for the citizens of Birmingham to build back better,” Sewell said. “Here in the 7th district, we’re tough. I’ve often said that what we lack in economic resources, we more than make up in a resilient spirit and hard work ethic and in making sure that we work together for our community.  We know that we’ve had systemic DIS-INVESTMENT that has prevented too many of our people from reaching their full potential.”

“The Build Back Better agenda would build or preserve more than 2 million affordable and sustainable homes and would drive down the costs of housing by dramatically expanding our supply of affordable housing,” Sewell said. “Which includes historic investments in housing construction and rehabilitation, economic development, and community revitalization.”

The visit began with a tour of the Villas at Titusville, a newly redeveloped affordable housing community in Birmingham, where Fudge and Sewell highlighted Biden’s plan to build or preserve more than 2 million affordable and sustainable homes nationwide in an attempt to drive down the costs of housing by dramatically expanding the country’s supply of affordable housing.

Sewell also joined Fudge for a tour of the Birmingham Civil Rights Institute, a roundtable on affordable housing and community revitalization, and a tour of Southtown Court public housing community.

“We know that systemic racism has done a great damage to this country and to cities like Birmingham,” Fudge said.

Fudge said that as a large city Birmingham would receive priority funding from Biden’s infrastructure bill that had passed the Senate on Tuesday.

Post pandemic, jobs are plentiful for anyone who will work; but inflation and a spike in housing demand has driven up the cost of construction labor, wood, steel and energy making purchasing a new home more costly than at any time in history.

The winner will receive free round-trip airfare for two to Washington, D.C. to attend an official reception.