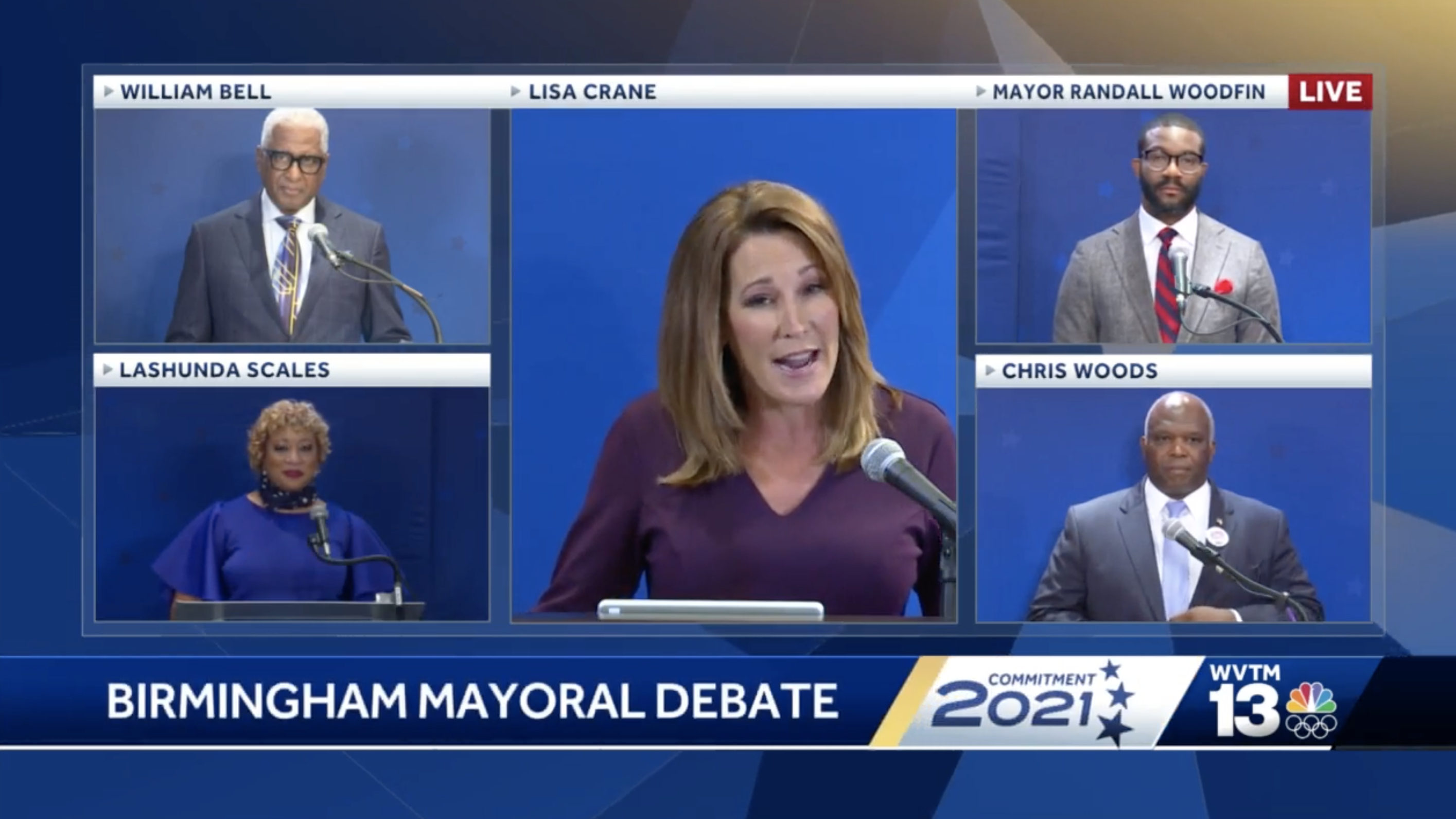 The Birmingham mayoral debates come at an inflection point in the city of Birmingham’s history. On the precipice of hosting the 2022 World Games, “The Magic City” is undergoing both exciting economic and cultural transformation while juggling the fallout of the COVID-19 pandemic and the concurrent rise in crime and joblessness.

Arguably, this mayoral election will be one of the most important in Birmingham’s 150 years as a city. And last night’s debate did an excellent job at showcasing the different leadership styles that would guide Birmingham. Ultimately, Mayor Woodfin proved on stage that he is the candidate with the personality, vision, and substantive policy plans to earn my vote as both a professional debate coach and proud resident of Birmingham.

Moderator Lisa Crane and the panel of Guy Rawlings, Dana Woodruff, and Chris Coleman: Grade: A+

The moderator and panel deserve top scores for their excellent handling of last night’s debate. In stark contrast to the moderation of the Presidential debates which consistently went off the rails, Lisa Crane did a fabulous job of refereeing the process of the debate by managing time restraints and keeping candidates on topic. Panel’s questions were pertinent and the exact sort of questions that need to be asked at this moment in Birmingham’s history. Their questions rightfully started with the most pressing issue facing Birmingham at this time (COVID-19 and vaccination rates) and then addressed other issues such as crime rates, reparations, Birmingham’s growth relative to Huntsville, UAB’s new stadium, and ethics concerns regarding some candidates. Overall, the moderation and the panel were a masterclass in political debate hosting. I cannot thank them enough for their civil service to the city of Birmingham.

I was most impressed with Woodfin’s performance in last night’s debate. I found his speaking style relaxed and collected. His tone demonstrated confidence and composure, and he has a mature ethos to him that is well beyond his years. Overall, Woodfin demonstrated the poise of an experienced politician.

That said, it was more his warranted answers and substantive policy discussions that lead me to conclude that Woodfin was the champion of last night’s debate. He answered each panelist question with direct answers and did not waste time devolving into buzzwords, catch phrases, or ad hominem attacks. He answered Woodruff’s question regarding officer recruitment by discussing his administration’s efforts to provide cost of living adjustment, merit pay, longevity pay, and strengthen pensions. He discussed how his administration has issued low interest loans with the Bham Strong initiative, helping hundreds of restaurants and small businesses stay afloat during the pandemic — well before federal assistance was provided. I could continue with repeating all the policies he discussed regarding later questions, but the point remains he focused his time on specific policy solutions to the major issues affecting Birmingham.

Equally as important, he used his opportunity to ask a pointed question to former Mayor Bell regarding his past failures to fund government pension plans. While other candidates such as Woods and Scales asked each other easier talking point questions, and Bell chose to question Woodfin’s decision about funding UAB stadium which many see as an exciting financial development in Birmingham, I found Woodfin’s question to be the best in drawing out an important policy difference between his and Bell’s administrations.

Overall, it was Woodfin’s ability to wield statistics and highlight specific policy proposals that his administration has done and is going to continue doing with his Vision 2025, alongside the absence of ad hominem attacks or buzzwords, that leads me to conclude he demonstrated the best ability to navigate Birmingham through these turbulent times during last night’s debate.

Former Mayor Bell has a certain gravitas to him. He had great posture last night and spoke in a tone that was simultaneously calm yet principled. I understand why he won the position of Mayor in the past. The biggest reason why I give him a higher grade than Woods and Scales is because I thought Bell did a much better job at identifying and discussing specific policy proposals and making attacks at incumbent Woodfin in ways they differed. I was also impressed at his ability to historicize certain happenings in Birmingham, such as reminding the audience that he was who had the idea to invite the World Games to Birmingham.

However, there are three major criticisms for Bell’s performance last night. The first was his comment stating that Woodfin was cheating in the debate and should be removed because he had an iWatch. I found this an off-topic remark that came across as Bell substituting substantive policy proposals and criticism with an unpersuasive assault on Woodfin’s character. These refereeing calls should be left to the panel and moderator, and not candidates who would wisely spend more time answering the questions asked of them.

The second issue I had with Bell was his response to Rawlings’ question regarding his violation of the Alabama ethics laws. It was proven with an audio recording that Bell was urging city workers to campaign for him in their off time. Bell responded to the question that he never told people to campaign during work hours. This response confused me, because it was exactly the campaigning in off time that was the trigger for the ethics violations. So rather than apologizing and admitting his mistake, Bell seemed unremorseful in illegally pressuring government officials to campaign for him in their off time.

Candidate Scales impressed me in last night’s debate. Her public speaking style was among  the best of all the candidates. She maintained constant eye contact, spoke in a composed and confident manner, and demonstrated a sense of strength. Scales did a better job than Woods in identifying her specific criticisms of incumbent Woodfin’s leadership decisions. However, my criticism of Scales is similar to my criticism of Woods, which is that I was unsure of what exact policies Scales would implement to solve the problems identified by the panel.

For instance, when asked about crime and confidence concerns within Birmingham’s Fraternal Order of Police (FOP), Scales just stated we need to “address crime at the top” and need to “start at the top.” These were largely buzzwords without specific details of what her process would entail. Furthermore, when asked by Woodruff about Birmingham’s growth rate relative to Huntsville, Scales responded by saying we must work at making Birmingham a place to live and earn and to focus on education but did not comment with any specific policy she may endorse to execute these goals. And, when asked about reparations, she said she supported the concept but did not answer the question in what manner should they be given or where the money should come from. There is a major difference between where a city wants to be and how to get there, and while I agreed with Scales’ vision of what Birmingham ought to look like, I was unsure what policies she may endorse to get us there that are distinct from other candidates.

Candidate Woods did a good job at exuding a friendliness that one would expect from a businessman. He spoke confidently and passionately while focusing on increasing growth in the Magic City. However, the reason why I give him the lowest ranking in last night’s debate is that I found his substantive policy responses to key questions lacking. While using buzzwords such as “unity” and “making business safe,” I did not find Woods identifying clear policy solutions to the problems facing Birmingham. A debate is not just an act in public speaking, but it is logically reasoning why your policy position is better than your opponents. And I was often underwhelmed and left wanting more substance when Woods answered questions.

For example, when asked by panelist Coleman about the FOP vote of no confidence and rising murder rates, Woods just stated that “Birmingham does not have a plan” and we “need to have a plan” and “Birmingham needs to unite.” This also happened during other moments in the debate, such as Rawling’s question regarding what the city can do for restaurants and Woodruff’s question regarding generational divides. Again, Woods’ response was we need to “make business safe”, that the “current administration has no plan.” But the devil is always in the details. And the purpose of a debate is to showcase a candidate’s plan, not just to say that we need one. Overall, while I found Woods’ speaking style to be enthusiastic, I was left unsure specifically what his policy solutions were to the very diverse set of challenges facing Birmingham in the status quo.

As that famous axiom goes, never swap horses in midstream. And after last night’s debate, I find myself reassured that Woodfin is the best candidate we have to weather these trying but exciting times in the Magic City.

Lee Quinn, J.D. from the University of Alabama Law School, is the Assistant Debate Coach at Samford University in Birmingham and national champion debater from Wake Forest University in Winston-Salem, North Carolina. His views here do not express the opinions of his employers.