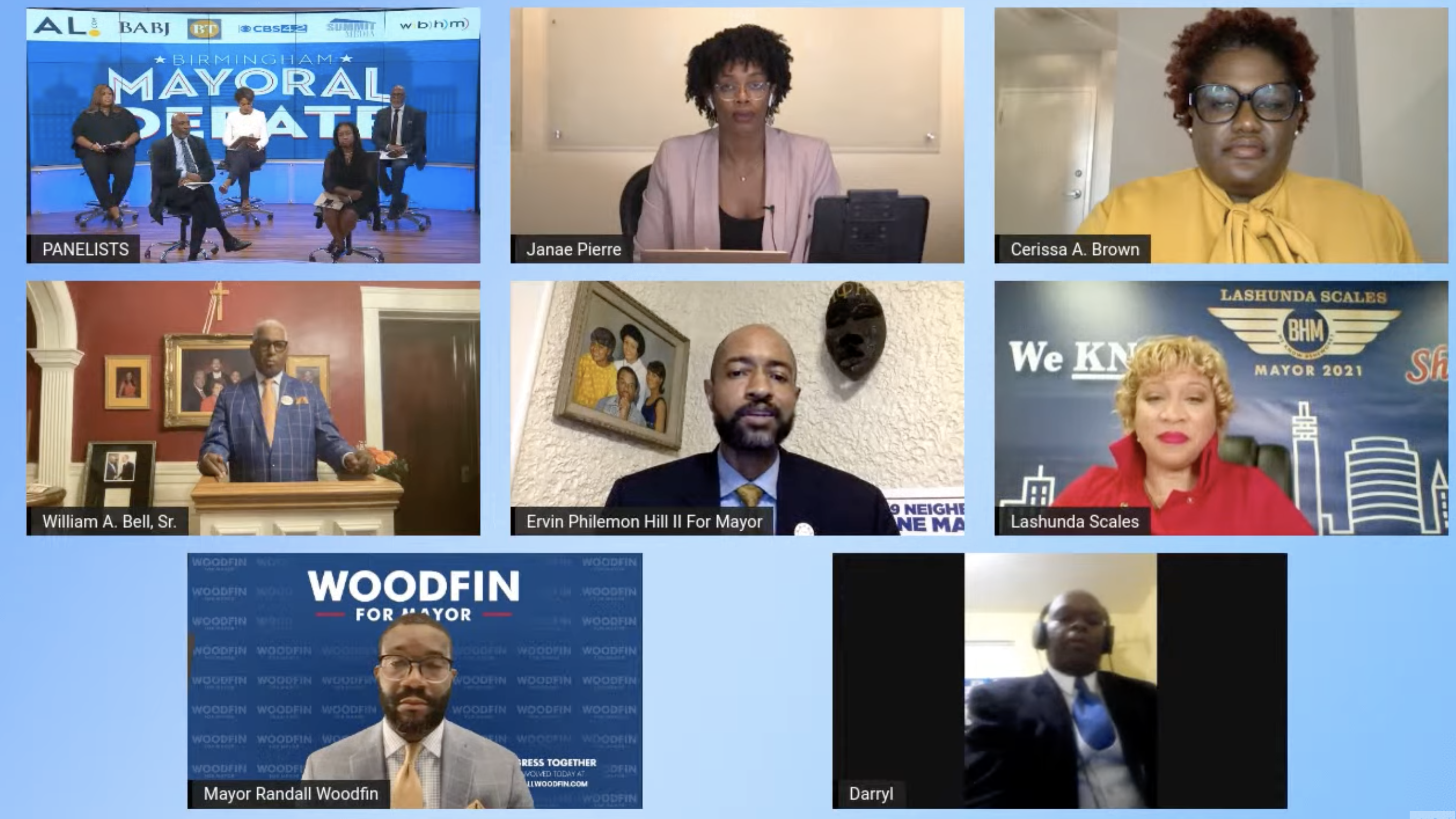 Birmingham mayoral candidates participate in a debate hosted by AL.com

Local businessmen Chris Woods did not participate in the debate.

Panelist Sheree Jackson of CBS 42 brought forward the question of gun violence prevention, a dominant topic for this election cycle, and whether tougher gun laws were the solution, early in the debate.

“First of all, you have to go to these projects, you have to go these dangerous areas. We have to do whatever we can to get these guns out of these people’s hands,” said candidate Darryl Williams, emphasizing work and trade school opportunities to residents living in these areas. “You need to give them something to do besides standing on that corner.”

“We have to do is work with the Alabama State Legislature,” Scales said. “We’ve got to get tougher gun laws for Birmingham to be able to enforce because we do not have home rule.”

“We have got to make ourselves where we’re not desensitizing crime, but yet by the same token, having crime-fighting strategies that definitely include mental health,” Scales said. “We are struggling with that in this city, and we’re not doing a better job at making sure those who have been impacted, as well as the officers who are exposed to this on a daily basis.”

Hill also called for research on how guns proliferate some Birmingham neighborhoods, but not others.

“We can’t just focus on the people who have the guns, we have to focus on the beginning on how they get into our community, and that is going to be a solution provided by the leadership of the city, the mayor, the police chief, Jefferson County officials as well as the sheriff,” Hill said.

The Birmingham Promise, a program created by Woodfin that provides tuition assistance for Birmingham city school graduates who enroll in Alabama public colleges and universities, as well as paid apprenticeships for high school students entering the workforces, provided the first verbal fireworks between candidates during Tuesday’s debate.

Hill vowed a forensic audit of city funds to determine how much public funds were used in the Birmingham promise and other initiatives started by the Mayor.

“We need to make sure that the mayor doesn’t have the authority, or the dictatorship rule to use public funds to start up his own non-profits,” Hill said. “That’s citizens money, not your money.”

Scales likened it to tuition for vote-for-tuition scheme, and said the program was “a photo-op initiative”, accusing the Birmingham Promise of taking funds away from Birmingham city schools. Later on, Scales equally maligned former Bell’s previous education plan, known as the Bell Plan.

“We will come up with every initiative other than properly supporting the [school] system,” Scales said. “What we’re saying is once you become of voting age ‘Now I give you something, in exchange for a vote,’ that’s not what I believe a mayor should be trying to do.”

Bell said there was nothing wrong with establishing scholarship programs for city school graduate programs, but said the Birmingham Promise takes away resources from K-12 students, while also defending his administration’s plan, stating it “built more schools than any other plan inside the city limits of Birmingham.”

After the debate, the mayor’s office reiterated that “the Birmingham Promise does not remove funding from Birmingham City Schools,” in a press release Tuesday evening.

Williams called the Birmingham Promise, the Bell Plan, and My Brother’s Keeper the “biggest scams I’ve ever seen in my life.”

“All you do is wake up and lie,” Williams said. “You show me some 2.5 students who benefit from this program, and I’ll shut up.”

Woodfin called the terse comments “intentional misinformation” and a “mischaracterization of the city’s youngest generation,” reminding the ensemble the city allocated funds, $70 million, to the city school’s independent $350 million dollar budget. Woodfin also mentioned the program had no GPA, ACT or SAT score requirement for students.

“This program does not require a grade point average. It does not require an ACT score. It does not require an SAT score,” Woodfin said. “If a state college, two-year or four-year accepts you into school, and you have any tuition gaps, the Birmingham Promise covers that. For any of these opponents to have a problem with that and not offer you anything else that’s an alternative to that, then this is not about necessarily supporting children. … They are just shooting blanks at anything with misinformation.”

As the debate closed, former Bell defended the decision to sell some of Birmingham’s water assets — something brought up for earlier in the debate by Scales — to accrue funds for public schools in Birmingham.

“The money we derived from that transfer, we built more schools,” Bell said. “We made a commitment to make sure all our kids had an opportunity to study in a building that could tolerate computers being plugged into the system.”

Bell also mentioned the saving generated by his administration’s decision to replace city lights with LED lights, stating “the framework plan that the Bell administration put in place is the plan that will rebuild our community.”

Brown listed city mental health care policy, food deserts, a green new deal for Birmingham, and road repair among the things she is focused on and concerned about.

“I am very concerned with the things that touch the community,” Brown said. “I’m concerned about the everyday things that are actually hurting the people. I’m here for the people. I want their voices to be heard. I want them to be taken care of. The rest of this stuff we can worry about later, but the people are first.”

Hill insisted voters “don’t pick another politician.” And vowing to take Birmingham to a “global level” if elected.

Scales said the purpose for her running was that Birmingham had been “placed on life support,” while touting her track record and previous public service work.

“Now, the citizens of Birmingham are slowly dying,” Scales said. “We’ve become the second-largest city in this state and it’s due to the fact that we have leaders of this city that refuse to look at the problems of our city and address it.”

Williams said he believes vocational and technical education in high school to give opportunities to youth in areas with high violent crime levels.

“Put all trade back in high school to give that young man something to do,” Williams said. “If they got something else to do except stand on that corner, we can save some of those young men.”

William also suggested replacing the Birmingham Police Chief Patrick D. Smith, a native of Tuscaloosa who spent 28 years in the Los Angeles police department, with someone local to Birmingham, and implied Woodfin was “afraid of corporate America.”

Woodfin defended himself against attacks lobbed throughout the debate, reiterating promises of continued neighborhood revitalization and focus on Birmingham’s 99 neighborhoods.

“Tonight, you’ve heard a lot of this misinformation. Several of my opponents have [mischaracterized] things we’ve done to accomplish on behalf of the citizens we serve. Birmingham, you know my character. You also know that I am the only one today, tonight, that has actually shared a vision,” Woodfin said. “Four years ago, I said: not you, not me, but we deserve better as citizens of Birmingham. And I also said that I will put people first by making investments in all 99 neighborhoods, and we’ve done that. But we have much more work to go. The city of Birmingham is on the right track.”

Polls for the Birmingham municipal election will open at 7 a.m. on Tuesday, Aug. 24.