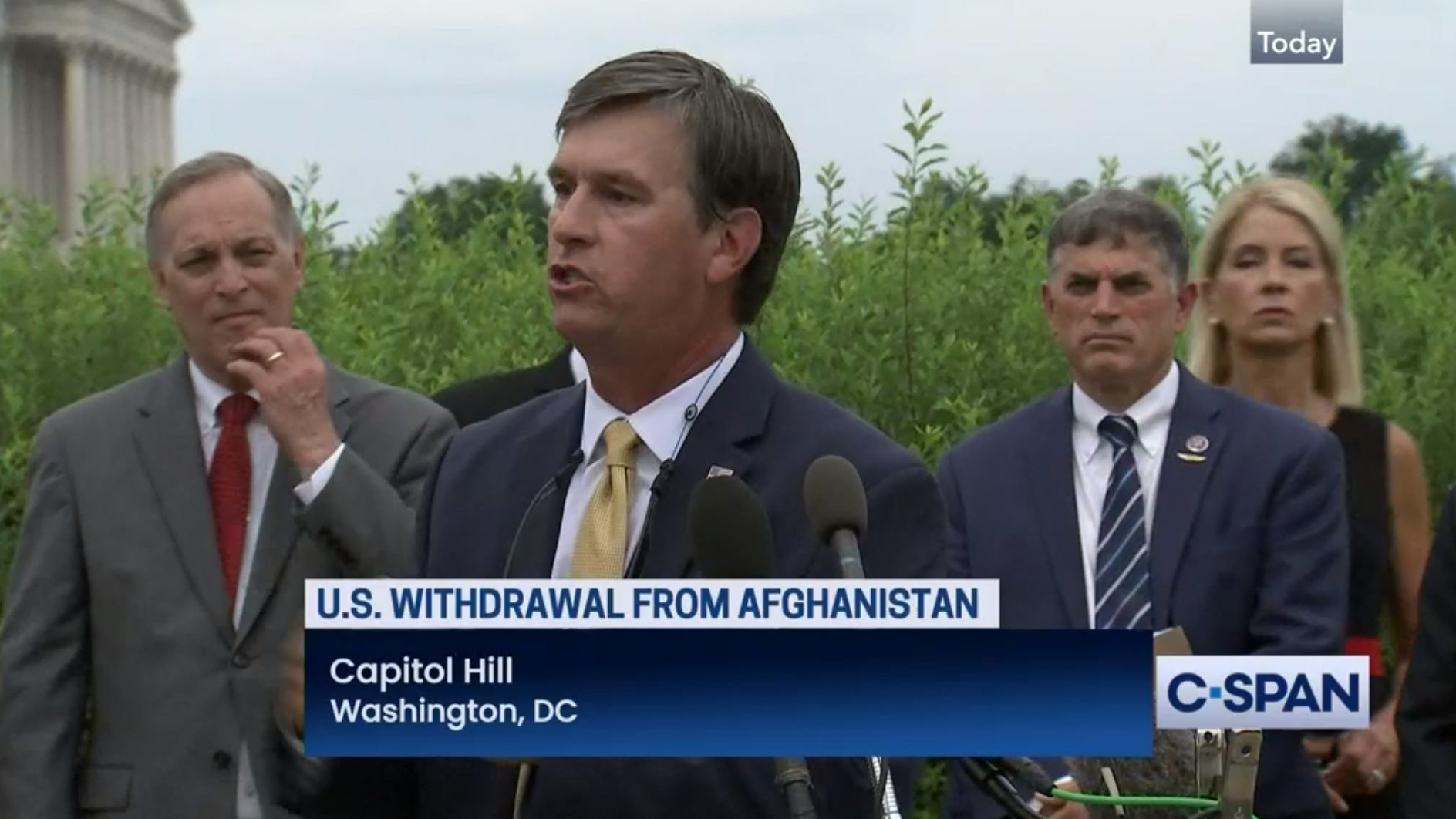 President Joe Biden addressed the nation upon the withdrawal of the final U.S. troops from Afghanistan. Biden vigorously defended his policy to get us out of America’s longest war and argued that the result would have been the same whether the withdrawal occurred fuve years from now or 20 years from now. Rep. Barry Moore, R-Alabama, strongly disagreed in his following remarks at the House Freedom Caucus press conference at the U.S. Capitol, calling for the media to hold the Biden administration accountable for the catastrophe in Afghanistan.

Moore serves on the House Committee on Veterans Affairs. Moore joined other veterans serving in Congress to return to Washington this week to demand that the Biden administration prioritize the safe removal of Americans and our allies before completing a military withdrawal from Afghanistan.

Moore has also formally requested assistance for over 250 Americans and allies still trapped in Afghanistan. Moore was among the first members of Congress to call for Biden’s resignation. He and his House Freedom Caucus colleagues are demanding that Speaker of the House Nancy Pelosi, D-California, call Congress back in session to vote on a resolution to impeach Secretary of State Antony Blinken. Moore has joined resolutions calling for the resignations of not just Biden but also Secretary of Defense Lloyd Austin and General Mark Milley.

“We have a crisis now in Afghanistan that is the making of this Administration,” Moore said in a statement. “They need to be held accountable. We need to hold the Administration accountable for what they’re doing, and it starts at the top, guys. You’re going to see the Biden administration try to come up with a scapegoat in the next few weeks.”

“Be ready, media. Be paying attention. Do your job. Do your job as the American media. Take off your DNC t-shirts and your DNC hats and get out your press credentials, go talk to your sources, and find out who’s driving this debacle in Afghanistan and the Department of State.”

“Don’t let them give you a scapegoat, guys,” Moore told the assembled press. “Don’t let that happen on your watch. You have the freedom of press for a reason. I mean, we can do what we can do as Congress – Pelosi’s not doing her job, obviously. She needs to call us back in. We need to hold her accountable. I say that we vacate the chair. I’m going to say one last thing: Joe Biden must go.”

“President Biden’s words today were hollow,” Rogers said. “One American left behind is one too many. The fact is President Biden abandoned Americans in Afghanistan – leaving them at the mercy of the Taliban and ISIS-K. The President made a promise to the American people that he would stay until every American was out. Today, he shamefully tried to paint his failure as a success.”

“This isn’t the end of a war – the terrorists still exist and they killed 13 American service members last week,” Rogers said. “They will not stop because the President arbitrarily picked a date. For months I’ve asked the Biden-Harris administration for a plan and it’s clear they never had one and still don’t have one. President Biden’s negligence put Americans in harms way. I am appalled by the Biden-Harris administration’s actions – this is a national disgrace.”

Congressman Mo Brooks, R-Alabama, has called for Vice President Kamala Harris and the cabinet to topple Biden using the 25th Amendment to remove a president who is not competent to hold office.

“Pray for the Americans left behind in Afghanistan. Unforgivable,” Brooks said on social media.

“President Biden has abandoned Americans to terrorists and others have died due to his mismanagement,’ Congressman Gary Palmer, R-Alabama. “His bewildering incompetence has caused preventable tragedy, embarrassed our country on the world stage, and made the world more dangerous.”

U.S. Sen.Tommy Tuberville, R-Alabama said, “I never thought I’d live to see the day when an American President would abandon our country’s citizens and orders our troops to back down from a fight. Hundreds of Americans are now hostages to terrorists.”

“Those who served in Afghanistan deserve our gratitude and represent the best of our nation,” Tuberville said. “Their leadership failed them with surrender and a disastrous withdrawal, which rests squarely on the shoulders of senior military officials and the Biden administration.”

“From 40 years of coaching, I can promise you that victory on the field brings more recruits and more wins,” Tuberville said. “The president’s surrender of Afghanistan will be a terrorist recruiting boom. Those who wish to do our nation harm are now more emboldened than ever. The American people deserve answers and accountability from the administration and senior military officials for this poorly executed plan.”

“Today, I cosponsored a resolution calling on President Biden to resign immediately,” Carl said on Tuesday. “He has proven himself to be unfit to lead our nation and serve as our Commander in Chief.”

“The war in Afghanistan is a reminder that freedom is not free – it is bought with a price,” Carl said. “Our nation will never forget the thousands of service members and civilians who paid the ultimate sacrifice in Afghanistan to root out terrorism and protect our homeland. Because of them, the world is a better, safer place.”

Sen. Richard Shelby, R-Alabama, said two weeks ago: “The situation in Afghanistan is a complete disaster. After 20 years and billions of dollars in training and support for the Afghan army, we need to seriously scrutinize why the Afghan military fell apart so quickly. The world is watching.”

The war in Afghanistan is now over, but many warn that there could be another Afghanistan war if the Taliban again support terror groups plotting attacks on America. The 20th anniversary of the Sept. 11 attacks on the World Trade Center and the Pentagon is just 10 days away.