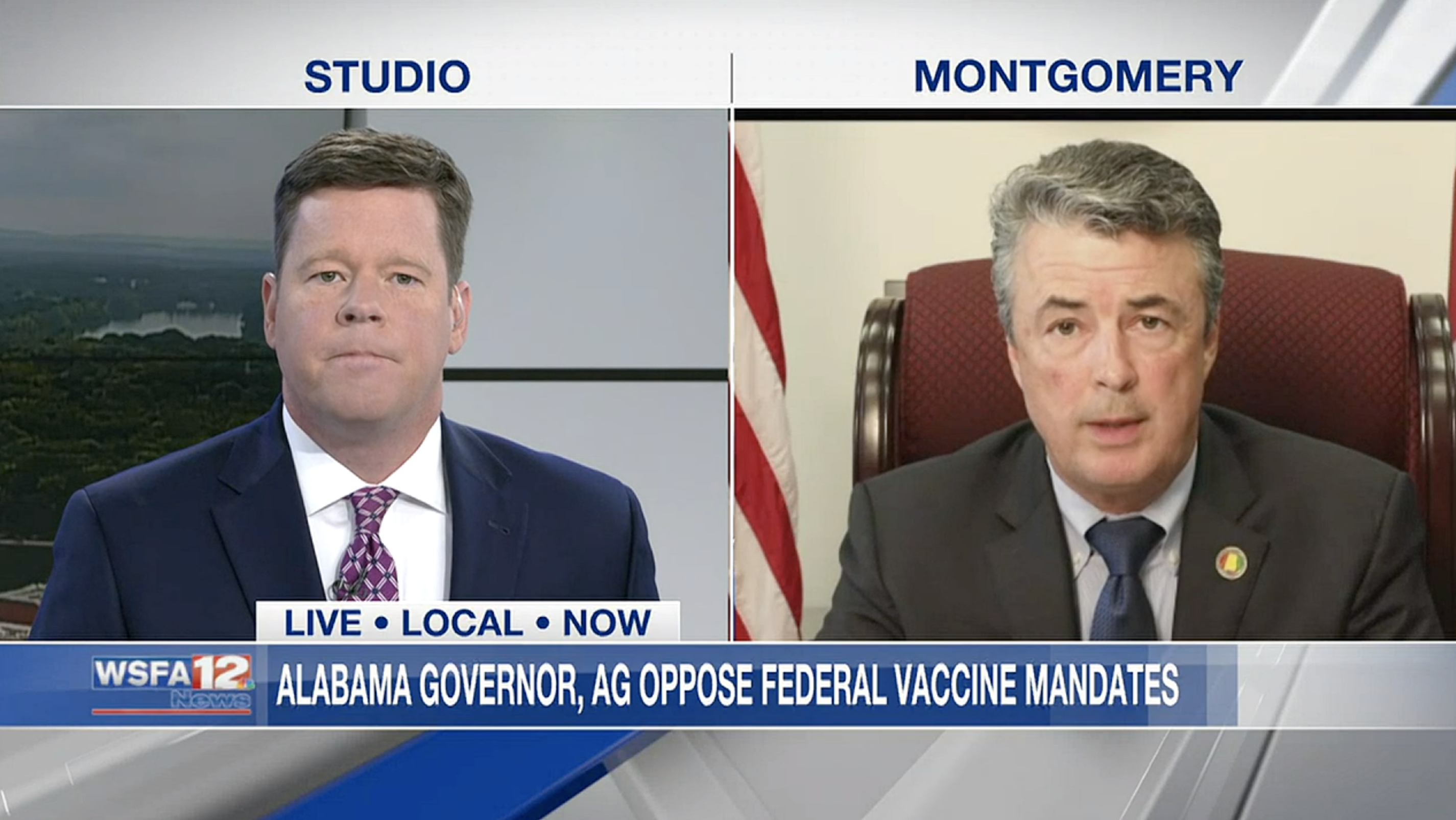 Attorney General Steve Marshall appears in an interview with WSFA in Montgomery. (VIA WSFA)

Mark Bullock didn’t do anything particularly unusual during WSFA’s 4 p.m. news broadcast on Tuesday. It was a typical broadcast that included a brief interview with Alabama Attorney General Steve Marshall.

Marshall’s office will be helping WSFA and AARP with an anti-fraud phone bank designed to prevent the elderly from falling victim to scams, and to help those who have been victims. That’s good work — the sort of work that the AG’s office should be doing much, much more of every day.

But near the end of that brief interview — the whole thing lasted less than 10 minutes — Bullock, a longtime Montgomery news anchor, switched topics on the AG and asked for comments on a hot-button issue: President Biden’s recent announcement that he would require businesses with more than 100 employees to ensure their employees are vaccinated against COVID or that they submit to weekly COVID testing.

That was a softball right over the heart of the plate for Marshall, who, like every other red-state Republican, has spent the last few days ranting and raving about federal overreach and personal health decisions and blah, blah, blah.

So, Marshall launched into the talking points that he most assuredly received from the Republican Attorneys General Association minutes after Biden’s announcement. He called the Biden announcement “unprecedented.” He claimed that it was a “takeover of state sovereignty.” He claimed it was “overreach.” And he said that his office was “prepared to push back.”

And then something a little weird happened.

Bullock didn’t simply let the comments stand and move on. He didn’t ignore the obvious flaws in Marshall’s comments. He didn’t forget facts and common sense.

Instead, in a very professional tone, Bullock noted that a 1905 Supreme Court decision upheld the legality of vaccine mandates implemented for the protection of the populace. And he noted that the decision actually states that “Americans do not have the right to harm their fellow citizens.”

Now, if you’re expecting a “gotcha” moment here, there isn’t one. Marshall didn’t stammer and stutter and jump up and run away. Instead, he was forced to start talking about law and facts and actual legal strategies that might come into play.

Gone were the broad catchphrases and buzzwords that consultants determined played well with the test groups. In their place was an actual discussion.

Marshall said that he was aware of the case that Bullock cited, and he seemed to agree that it would provide precedent in this situation. But he also said that other factors could come into play — was the rule, which will be implemented through OSHA, properly issued, will it meet the emergency order requirements, etc.

And then, Marshall sort of gave the game away.

“There are significant arguments that exist to be able to push back against this president. That’s what courts are for,” Marshall said.

Because, really, that’s what all of this is about — creating a political fight within the deadliest pandemic this country has ever endured. Not for the good of the country or the good of your neighbor. But for the benefit of political gain.

Bullock went on to ask Marshall about legal remedies for any workers who might lose their jobs because they refuse to get a vaccine. Marshall said that was a long conversation.

When Marshall ended his answer by saying that people had many reasons for not wanting to get the vaccine and that he encouraged people to do what was best for them, Bullock wrapped up by pointing out that the vaccines have proven to be safe and effective at preventing the most serious cases of coronavirus.

And maybe — just maybe — his handling of the interview, and his injection of facts, will sway someone to get the vaccine. And maybe save a life or two.

And maybe — just maybe — some other people will take a look at this interview and ask why a state’s AG, in the midst of a deadly pandemic, is so hellbent on pushing people away from vaccines, so hellbent on suing even when he acknowledges that the precedent of protecting the American public is on the president’s side, and is so willing to pander to the very people who are keeping this pandemic roaring along.

Bullock didn’t do anything special. He was professional and respectful throughout the interview. He didn’t editorialize or offer any commentary. He didn’t argue with Marshall, and he allowed the AG all the time he wanted to answer the questions.

But by providing context and facts to Marshall’s comments, and asking informed questions, he forced a dialogue that ate away the political rhetoric and exposed this charade for what it is.