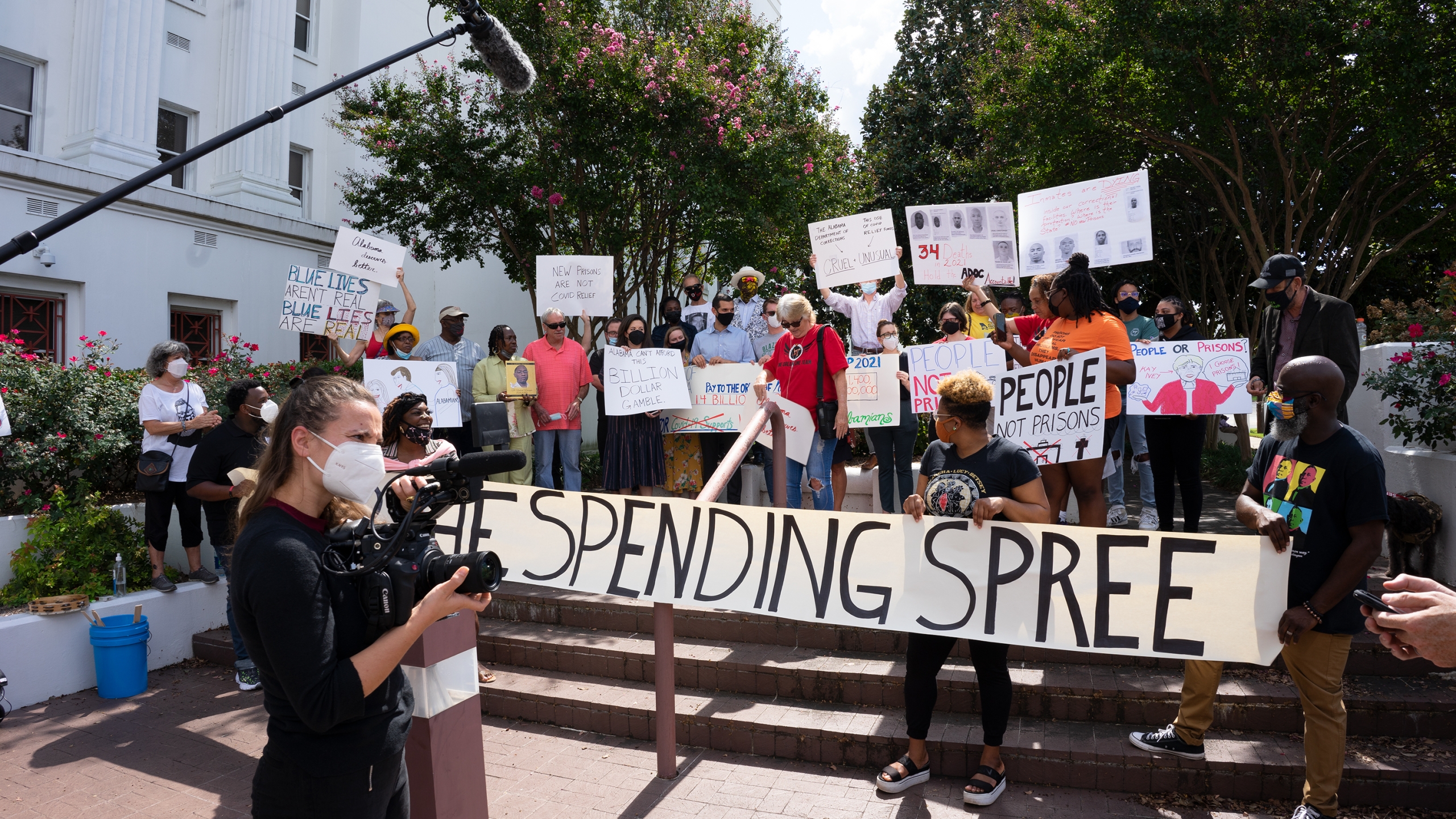 A protest held outside of the Alabama Statehouse on Sept. 28 against new prisons. (JOHN GLENN/APR)

A group of protestors — many parents, siblings, or children of incarcerated individuals — demonstrated outside the Statehouse in Montgomery Wednesday afternoon against the use of $400 million in American Rescue funds to build new prisons, while inside deliberations over the proposed prison bills continued on the House floor.

Organized by Unique Dunston, founder of Reclaiming Our Time, the majority of organizations present at the demonstration are members of the Communities Not Prisons coalition. Montgomery Pride United, Alabama Students Against Prisons, and Pastor Kenneth Glasgow, founder of The Ordinary People’s Society, were also present.

“This is preposterous that would use these vital funds in a state [where] we have the worst percentage of COVID deaths,” said Morgan Duckett, co-founder of Alabama Students Against Prisons. “We have failing schools, failing students. They’re not reaching their reading benchmarks. We have rural hospitals that are closing everywhere. 70 percent of the state doesn’t have broadband internet access. There are some many we could use the $2.1 billion we’re getting, and not spend 24 percent of it building new prisons.”

“The Department of Justice has declared that Alabama Department of Corrections inhumane, and our governor and our legislators are telling us, ‘No, we’re not inhumane. We can resolve this issue,'” Glasgow said. “But then you want to take $400 million from our health care, to keep us alive, to deposit into more facilities and locking people up. To me, that is a sign or indication, and the proof, that you’re inhumane.”

During the protest, one mother, who has three incarcerated sons, held a sign with the photos of incarcerated people who have died in ADOC prisons, leading a chant: “Their blood is on their hands. No prisons are our demands.”

Another mother whose son died in prison due to mistreatment said legislators inside only want to build more prisons, not discuss reform.

“We got people in there fighting for us,” she said. “We can’t stop, because this is a bandaid, y’all. This is a bandaid. It’s not going to help any of our loved ones.”

“I have been up on the floor in the gallery since about 11:26 this morning, listening to our representatives that don’t actually represent us at all,” said activist Francis Wallace, a fellow at the ACLU Smart Justice Organizing School, during her speech at the protest. Wallace mentioned she had been arrested 12 times in the past year and a half, at only 21 years old.

After exhaustive deliberation in the House, the prison construction bill, which includes the $400 million in COVID-19 relief funds the group protested against, passed 74-27.

The Alabama Senate is expected to consider the bill at 3 p.m. Thursday.