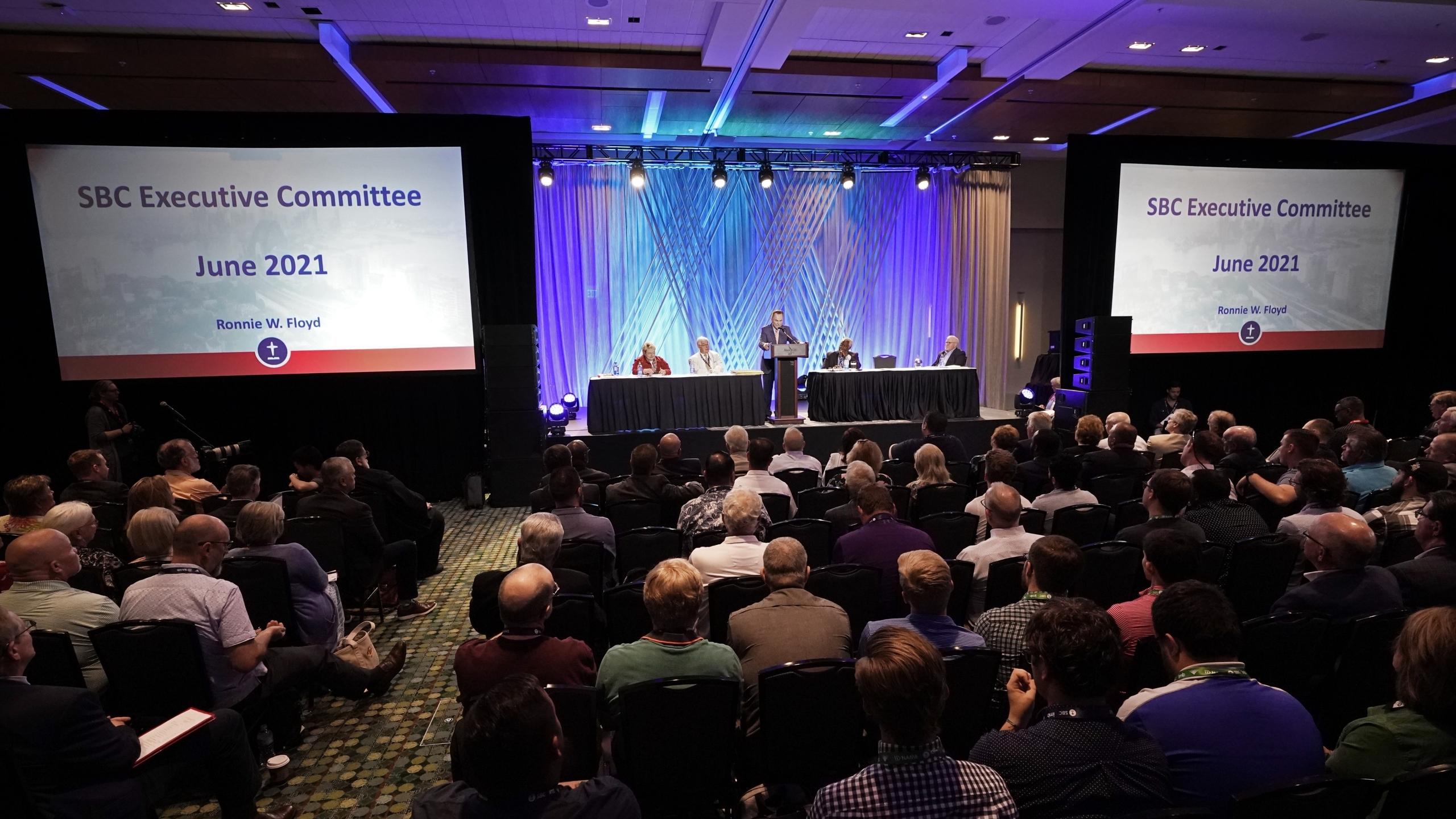 The Southern Baptist Convention’s executive committee on Tuesday voted to waive attorney-client privilege so that an outside investigative firm can fully delve into how the committee handled allegations of abuse in SBC churches going back decades.

After several contentious weeks of meetings and two votes against waiving that privilege, members Tuesday agreed to move forward with a full transparency, fulfilling the wishes of individual church representatives, sexual abuse survivors and church leaders who wanted to waive that privilege.

The committee on Sept. 21 voted against waiving attorney-client privilege, with all but one executive committee member from Alabama voting against the measure.

“I have just grown frustrated with the incompetence and my perception of the denominational wide corruption,” Hicks told Capstone Report.  “The SBC stands for Secret Backroom Control. Most decisions are made in a backroom by the Elites before it ever goes to the entity trustees.”

Hicks expressed concern about waiving privilege and that it might open members up to personal liability, according to Capstone Report.

“I wanted to resign while I was still covered under our protection,” Hicks told Capstone Report. “I felt that I needed to resign immediately because I personally believe part of what is taking place now with the current ‘scandal’ or whatever, either they are attempting to do it or give impression of doing it and they want to open up individual EC members for lawsuits.”

The SBC’s president, pastor Ed Litton of Redemption Church in Mobile, the only Alabama member to have voted to waive attorney-client privilege, gave members a week to consider and take another vote, but again the committee voted against waiving the privilege.

At the SBC convention in June, the denomination’s messengers, representatives from individual churches, voted to launch the investigation by the third-party firm Guidepost Solutions and for the executive committee to abide by that firm’s best practices, which includes waiving attorney-client privilege.

The SBC’s sexual abuse crisis was exposed in The Houston Chronicle and The San Antonio Express-News’s expansive 2019 investigation that found 700 victims of abuse over a 20-year span. Despite victims pleading with the SBC to stop allowing the abusers to move from church to church, the SBC declined to draft a registry to track those predators.

Approximately 200 pastors, Sunday school teachers, deacons and other church leaders were convicted in connection with those sexual abuse cases during those 20 years, the newspapers reported, and many more were accused but not convicted, or were sued civilly.

The committee’s votes against waiving privilege drew criticism from many survivors, numerous committee members, and those on the SBC’s Sexual Abuse Task Force, which was formed at the SBC’s convention in June to oversee Guidepost’s investigation.

“Should the Executive Committee fail to comply, we will lead our churches to consider how to reallocate funds away from the Executive Committee while continuing to fund the cooperative mission and education endeavors that have always made Southern Baptists great,” wrote the members of the South Carolina pastors in a letter to the executive committee.

Litton told APR last month that he believes transparency critical, and that he’s confident in the task force and Guidepost.

“And I hope that if there’s any resistance it will be minimal, if there is. My hope is they’ll be able to present to Southern Baptists a clear picture of what has happened, and then we have to take that and say, okay. What needs to change about us? What is it in our culture that needs to change in order to make sure that people like the person you’re talking to is, first of all, protected. That it doesn’t happen, but then, secondly, that they can find healing grace in the midst of all this, and mercy,” Litton said.

Litton during Tuesday’s meeting said he and others on the sexual abuse task force the previous evening gave a proposal to executive committee officers that asked the committee “not to exercise attorney-client privilege” at the end of the investigation.

Litton called the proposal a “workable solution” and questioned why EC officers were dismissing it during Tuesday’s meeting.

Committee officer and pastor Jim Gregory of First Southern Baptist Church in Mountain Home, Idaho, said the committee “has hung up and continues to hang up over what’s very clearly written in here, and that is that we shall not invoke attorney client privilege on any relevant documents.”

“I have a responsibility to protect the convention. I believe we put our convention at risk if we waive attorney client privilege,” Gregory said.

“I find it puzzling that Dr. Floyd was in agreement with this last night. I don’t understand,” Litton said, referring to pastor Ronnie Floyd, CEO and president of the SBC.

Floyd said during the meeting that Litton asked him Monday evening if he would be willing to commit to the proposal, and Floyd said he told Litton that “in good faith” he’d take it to the committee officers.

“My initial take was, yes. I was very encouraged, but I didn’t know enough about it,” Floyd said.

Greg Addison, executive vice president of the committee, then read a statement regarding the officers’ deliberation of Litton’s proposal Monday evening, and said “it appears the new proposed contract does not address the issue at hand” and that attorney-client privilege would be waived under the proposal.

“I wanted to be clear. It was a good faith effort to attempt to solve this terrible dilemma that all of us are in, and I’m sorry it didn’t work,” Litton said.

Pastor Jared Wellman of Tate Springs Baptist Church in Texas, who’s made previous motions for the committee to approve a contract with Guidepost and waive attorney-client privilege, did so again on Tuesday.

“I think that in Nashville the messengers spoke clearly,” Wellman said “I believe they knew what they were asking for, and I think that’s been evident in the last few days when we’ve had all six seminary President’s support this, six SBC presidents, three former EC Chairmans, including the current one, one former EC president, 12 state executives, over 1,000 pastors and churches in collective statements.”

Tiffany Thigpen, an abuse survivor who’s called for full transparency in the pending investigation, explained during an audio Twitter conversation before Tuesday’s vote that abuse survivors have been waiting for the church to do the right thing for decades.

“There’s been gross mishandling of abuse and abuse cases and cover ups for at least,  as long as I know, 30 years,” Thigpen said.

Thigpen explained that the committee needs to do what’s right by abuse survivors.

Jules Woodson, another abuse survivor on the Twitter discussion, called the matter “a systemic problem” that isn’t about the survivors forgiving those who abused them, but rather leadership who have ignored the abuse for years.

“And I have forgiven. This is about something so much bigger than that,” Woodson said.

“While everyone is fighting and arguing over this, and while the buck has been passed for all of these years, there are more and more and more survivors,” Thigpen said, and survivors must carry the stories of the new survivors.

“Helping to pick people up and carrying them through to the finish line, and it’s not the church,” Thigpen said. “We’re the ones asking for the church to help us carry them through.”

Pastor Andrew Herbert of Paramount Baptist Church in Texas and a member of the committee’s sexual abuse task force, talking during the discussion said the committee, some of the committee’s  senior staff, and the newly-appointed committee lawyers “have been working overtime to try to avoid this and doing everything they can not to fulfill the will of the messengers.”

Once the committee meeting resumed after an executive session to give the committee’s attorneys time to discuss a matter with members,  committee member and pastor Mike Keahbone ​​of First Baptist Church of Lawton in Oklahoma said “we cannot fail today.”

Rob Showers, committee member and chairman of Committee on Missions and Ministry, then proposed a substitute motion which would allow the committee to “consider the waiver of privilege at the appropriate time,” thereby putting off the decision to some future time.

Showers’s motion also called for a law firm to be hired “that will be mutually agreeable to the executive committee” which would hire Guidepost “who are subject to attorney-client privilege” to conduct the investigation. Guidepost would be given all documents, including attorney-client privilege documents, and the committee would decide on the waver matter at that later time.

After some confusion as to whether the committee should first vote on Wellman’s motion or Showers’s motion, Showers’s motion was taken up first, and members voted 51 percent against the motion.

Debate on Wellman’s motion resumed, and committee member Dave Bryan, speaking for the motion, said that while he had twice voted against waiving attorney-client privilege, he planned to vote for the motion Tuesday.

“If we are going to suffer, let’s suffer for doing the right thing,” Bryan said. “And while we disagree on what that right thing is, for myself it comes down to not advocating, not falling in line with the direction of our convention, I believe could be even more disastrous for the executive committee and where we are right now.”

After more debate, members voted 44-31 to approve the contract with Guidepost and to waive attorney-client privilege.

“I’d like to really express my relief that this present challenge seems to be behind us,” said committee chairman Rolland Slade, who voted Tuesday to waive privilege.  “Also, I want to express sorrow over the conduct that we have displayed as Southern Baptists over the course of this absolutely necessary deliberative process.”

“Too often, brothers and sisters have demonized one another for having reasonable disagreements as everyone fought to fullfill, not to defy, the will of the messengers, which included absolutely unnecessary personal attacks on our EC members, legal advisors and members of the sexual abuse Task Force.”

Slade said it’s time for the committee to move forward without attacking one-another.

“Most importantly, it’s time to know for sure where we have fallen short on the question of sexual abuse within the Southern Baptist Convention,” Slade said. “So that we can correct any errors and move into the future as a convention that’s the most safe for our most vulnerable members.”

The Alabama Department of Economic and Community Affairs is administering the grant from funds made available by the U.S. Department of Justice.