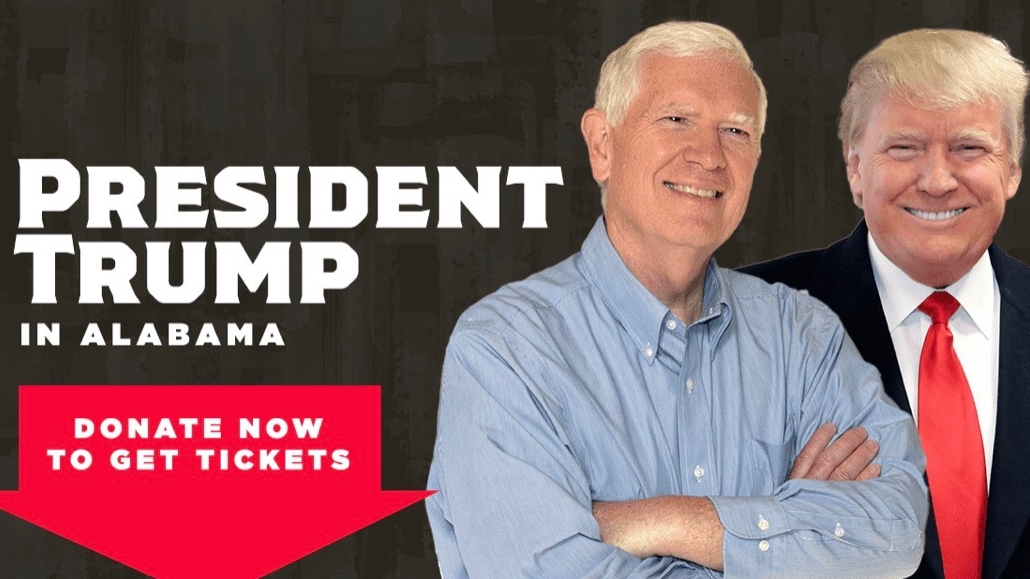 A message using WinRed, a conservative fundraising tool promoting special access to the Trump event for those who donate to Brooks.

Congressman Mo Brooks should immediately end his campaign for U.S. Senate, but he won’t. Former President Donald Trump should reverse his endorsement of Brooks, and he might.

If there has ever been any question that Brooks lacks the capacity to offer stable, rational leadership, his recent tirades against ALFA, the BCA and the U.S. Chamber of Commerce should remove all doubt.

In a pair of radio interviews, Brooks has alleged that ALFA, the BCA and the U.S. Chamber of Commerce are somehow secretly in league with “socialist Democrats” in an effort to flood America with “illegals” and “cheap labor.”

“Entities like the U.S. Chamber of Commerce, Business Council of Alabama, ALFA or any other agricultural political union around the country” are responsible for America’s immigration issues, Brooks said during an interview on the Sean Sullivan Show in Mobile.

“They often refer to themselves as farmers bureaus,” Brooks said. “They want cheap foreign labor crossing our borders. And so they have got a lot of money and they try to elect candidates. They try to ensure that their candidates for open borders get elected. So you have them, on the one hand, coupled with the socialist Democrats who seek political power. They think the best way to ensure power is to import people.”

It might be tempting to believe Brooks’ unhinged rants against ALFA and the others is simply politics because AFLA endorsed his opponent, Katie Britt, for U.S. Senate. But as Republican Congressman Jerry Carl recently said, Brooks has veered far outside a usual political retort.

“I don’t know where Mo Brooks gets this stuff from,” Carl said during a recent interview on FM Talk 1065. “I realize it’s all politics. I get that. I have to deal with that on a daily basis, but to throw his colleagues under the bus the way he’s thrown us under the bus – and the American families here in Alabama. You don’t get any more rooted, pardon the pun, than our farm community.”

During the interview, Carl also said Brooks has angered every elected official in his state.

“He’s isolating us and trying to label us as being something evil for his political gain,” Carl said.

Carl’s assessment here cuts straight to the heart of the matter: Brooks is demonizing his fellow Republicans because his political campaign is faltering.

Former President Ronald Reagan’s Eleventh Commandment — “Thou shalt not speak ill of any fellow Republican” — may be ignored by Brooks and others in the GOP, but here in Alabama, it is still law among principled politicians.

Brooks’ every act and utterance is designed for self-promotion. His first priority is not the state, nation, or even the Republican Party. His personal drive is a Gollum-like “my precious.” His idea of governing is to appear on talk radio or Newsmax, OAN, or Fox to portray himself as a “Conservative fighter.” Far from being an actual fighter for his state or country, Brooks is a toy soldier whose only genuine interest is career advancement even in the waning years of his life.

For the last 40 years, Brooks has lived off the taxpayer’s dime. Alabama has not received a fair return on its investment when it comes to his accomplishments.

Brooks, a U.S. House representative for Alabama’s 5th Congressional District, has never sponsored a bill that became law. He most recently voted against funding the military by opposing the National Defense Authorization Act of 2022, a bill that also funds Redstone Arsenal, which is central to his district’s future.

If the former president continues championing Brooks, he very well may become a three-time loser in the Yellowhammer State.

Trump says he likes winners, and he says he loves Alabama. Brooks is not a winner and Alabama deserves a better senator than Brooks. Trump should acknowledge that Brooks is fatally wounded and pick a winner, not a bumbling loser who flails about restlessly, wildly and violently like a carp on a Coosa riverbank.

The state’s lieutenant governor offers a keen and biting observation.

“The men and women represented by ALFA are some of the finest people in our state, and I’m proud to carry their support,” said Ainsworth in a tweet. “Anyone who attacks and criticizes family farmers, or minimizes challenges they face, does not speak for me or the majority of Alabamians.”

As Carl concluded of Brooks: “I am tired of being shoved around by someone who has spent a lifetime in politics.”

Most people would agree.

It is time for Brooks to exit the field. Trump can make that happen, and he should — if not for the good of the Alabama he says he loves, then for his own reputation.