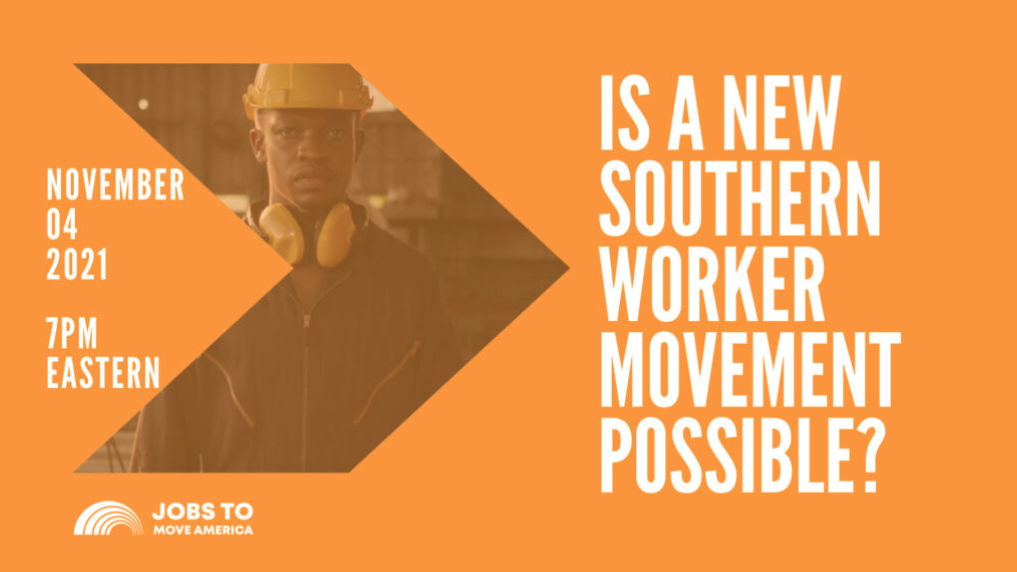 An upcoming virtual event to feature Birmingham Mayor Randall Woodfin is to center on work in Alabama and across the South to build sport for labor rights, corporate and government accountability.

Hosted by Jobs to Move America, a Los Angeles-based national public policy and worker advocacy nonprofit, the Nov. 4 event comes not long after Amazon employees at the company’s Bessemer facility took a vote on whether to join a union, seen by many as a pivotal moment in labor organizing in the South.

Georgia voters in January also put two Democrats into Congress, thanks largely to greater numbers of Black voters showing up to the polls.

“We do feel like the South is really going through this pivotal moment,” Alaa Milbes, communications director for Jobs to Move America, told APR recently, mentioning the Alabama Amazon vote and Georgia turning blue.

Milbes explained that despite the changes the South is seeing, which she said tool long-term support and years of organizing to make happen, most outside of the region have little understanding about what’s happening in the South.

“Our goal is, how do we give that more attention so that people are motivated to support the work we’re doing there, so people really feel like the work happening in Alabama is a national movement. It’s not just about the American South,” Milbes said “It’s about workers all over the country having a bigger voice, and really being able to give them the support they need to have fair living wages and be able to support a family.”

Although manufacturing and job growth in the South remain higher than in other areas of the U.S., Southern states have the highest poverty rates, the group notes in a press release on the upcoming event.

The event — titled “Is a New Southern Worker Movement Possible?” — will examine what it will take to unite labor rights and civil rights in the deep South. The event is to take place Nov. 4 at 6 p.m. CT. There’s no cost to attend, but registration is required and donations to the nonprofit are being accepted. Those wishing to attend may register here.

“We forget that at one point the South was leading in this area,” Milbes said of worker’s unions. “So it can happen. It’s just that a lot of big name corporations, multi-billion-dollar corporations, have been winning for several decades now.”

“It’s not about who’s winning. We all want to win, but we also want a fair chance for workers to get those living wages,” Milbes said. “To have safety in the plant, and not be worried about expressing themselves when things aren’t going well.”