The Alabama Forestry Association announces its endorsement of Republican Tom Butler, who is seeking re-election for state Senate District 2, which covers Madison and Limestone counties.

Butler attended the University of Alabama where he earned degrees in Chemistry and Biology and then proceeded to earn a degree from the Auburn University Harrison School of Pharmacy.

Butler is a lifelong resident of Madison County.

He and his wife Karen live in Madison City where he serves as a local pharmacist.

Butler was elected to the Alabama House of Representatives in 1982 and served until 1994. 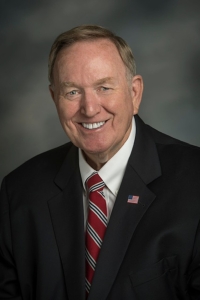 In 1995, he was elected to serve District 2 as the state senator.

“Tom’s long tenure in Montgomery not only helps his constituents but his community in North Alabama that he serves so diligently,” said AFA President and CEO Chris Isaacson. “We are looking forward to another four years with Senator Butler in the senate and AFA is excited to support his reelection bid.”

Butler is a strong supporter of schools, law enforcement and emergency services, the association said. His goal has been to bring jobs to the community and grow the economy in District 2.

“I am elated for the endorsement from the Forestry Association,” said Butler. “AFA has members that contribute to the Alabama economy more than anyone else in the state. Where new houses are popping up in my district, the timber industry plays a vital role in making sure those homes happens. I look forward to continuing growing the industry in the state.”

Butler will seek the Republican nomination for Senate District 2 in the primary election on May 24, 2022.