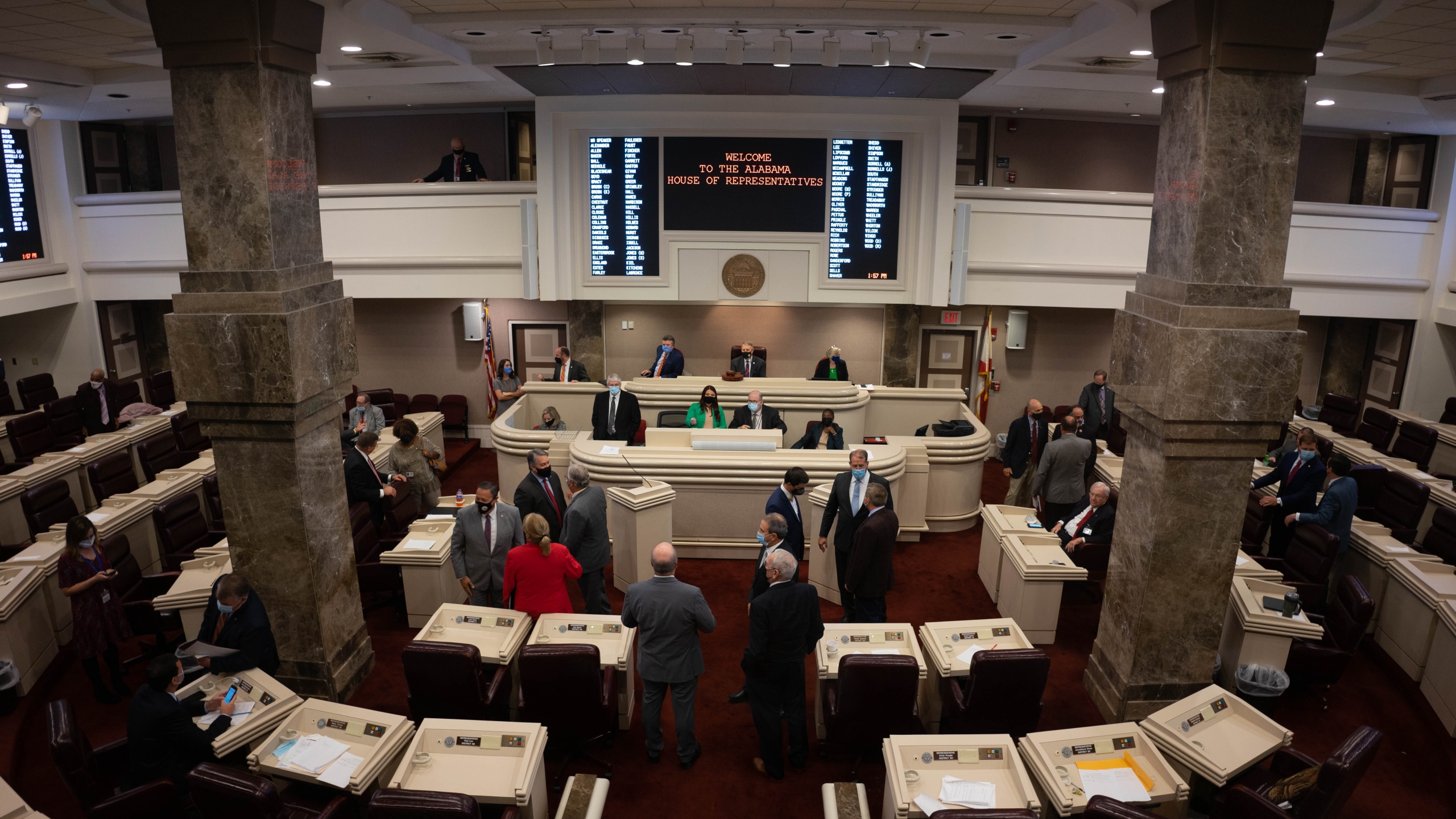 The Alabama Legislature wrapped up a six-day special session Thursday that Speaker of the House Mac McCutcheon called “one of the most successful special sessions in Alabama history.”

Of course, not everyone agreed, including Democrats and grassroots organizations who said the process was too rushed, lacked transparency and disenfranchised Black voters.

Before either chamber officially gaveled in, select members of both chambers sat in for a joint committee meeting on Oct. 26, where all four redistricting maps were revealed to most legislators for the first time. It was immediately clear that Republicans were ready to move forward with the maps they had, as Democrats’ objections were heard but summarily dismissed.

The tensions that had been developing behind the scenes spilled over as Democrats felt they were being ignored.

“Personally, I think this is doing a disservice to the process and also to the people that we represent that haven’t seen this map either,” said state Rep. Chris England, D-Tuscaloosa. “There’s got to be a better way to do this. I think it’s flawed.”

Rep. Chris Pringle, R-Mobile, led the process for the House while Sen. Jim McClendon, R-Springville, carried the charge for the Senate. Pringle often pointed to a compressed timeline that Republican leadership had to work with.

After two hours of debate, mostly criticism from Democrats, all four maps moved forward so that the bills could be introduced at the start of the session on Oct. 28. The maps were split between the two chambers once the session began, with the Congressional and House maps starting in the House and the Senate and state school board maps beginning in the Senate.

The Congressional and House map discussions began in earnest Friday in committee.

Several citizens, including active or past members of the Alabama State House, voiced concerns before the committee Friday. Prevailing issues posed were whether district lines had been broken or packed along racial lines and the redrawing of particular districts.

Pringle remained firm in the guiding principles in drawing the districts, which he said were keeping counties whole, avoiding splitting precincts, keeping the core of districts intact, complying with the Voting Rights Act and not pitting incumbents against each other,

Pringle answered most every complaint and alternate option by pointing to where he believed they drew conflict with those principles.

That continued as the bills moved on the House floor.

The congressional district map is arguably the most controversial, as Democrats filed a lawsuit before the session even began to create two substantially minority districts instead of just one majority-minority district.

However, most of the substitutes introduced on the floor were from Republicans.

After two hours of debate, the map was passed through as introduced to go on to the Senate.

Democrats raised contentions over the priority of keeping incumbents from facing each other when debate moved to the House district plan.

Like with the congressional map, Republicans by and large shut down all alternatives to the House plan.

Rep. Jeremy Gray, D-Opelika, introduced a substitute plan that focused on keeping counties whole instead of on preserving precincts or incumbencies.

Pringle said the map would pit 10 incumbents against each other and seven majority-minority districts would be abolished under the plan.

After the vote was final, Democrats alluded to the upcoming court battle over the maps.

While the redistricting process was moving along smoothly, bills that would weaken the federal COVID-19 vaccine mandates were rising to the surface.

Protestors with Health Freedom Alabama were there from day one, calling on lawmakers to bring bills to the floor that would ban employers from requiring COVID-19 vaccines for employees.

While those bills did not make it even to committee, two bills did come up through the Senate.

The House health committee brought forward the bills mostly to opposition. A bill sponsored by Sen. Arthur Orr, R-Decatur, amending the vaccine passport ban drew criticism from the co-directors of Health Freedom Alabama for narrowing the language to apply only to COVID-19.

Orr said he did not support the amendment to his bill narrowing the language, but the majority of the Senate had voted to add the language.

The committee passed the bill as it was.

However, by the time the bill reached the House floor after three hours of debate on the final day, the language was gone. In fact, Orr later said it now more closely resembled a completely different bill from Sen. Sam Givhan, R-Huntsville. In its final form, language giving the attorney general powers of injunctive relief had been removed, along with the language narrowing the passport ban to COVID-19 vaccines.

The bill as passed requires parental consent for minors to obtain COVID-19 vaccines and bars schools from inquiring about their vaccination status.

A bill sponsored by Sen. Chris Elliott, R-Fairhope, requiring employers to honor medical and religious exemptions to COVID-19 vaccines drew even more criticism in committee. For the directors of Health Freedom of Alabama, the bill didn’t go far enough to protect employees from workplace discrimination. The Business Council of Alabama said the bill creates confusion for employers with conflicting federal and state mandates and the Alabama Department of Labor asked to be removed from the bill altogether. Despite the objections, the bill passed out of committee without changes.

However, by the time it reached the House floor, after three hours of debate by the Republican caucus behind closed doors, the bill looked very different.

The medical exemptions had been fleshed out with more specific options for medical objections, including one exemption that would require a healthcare provider to sign off on the form.

The standard of proof remains simply a completed and submitted form, with little vetting in place. However, the bill did add language for disciplinary action for fraudulent claims, up to and including termination. The process for determining a fraudulent claim is still unclear given that the exemptions are presumed under the bill to be “liberally construed in favor of the employee.”

Lawmakers also added language that specifies that the bill should not be construed as taking away an employer’s right to terminate an employee for any other reason.

Democrats on the floor once again criticized the bill’s “blanket” coverage, and challenged the bill as being anti-business.

Rep. Prince Chestnut, D-Selma, brought concerns about private actions being taken against employers due to the bill. Rep. Mike Jones, R-Andalusia, who carried the bill in the House, said he agreed with Chestnut and welcomed an amendment that Chestnut planned to bring back up.

Then, an hour-and-a-half into the debate, a cloture vote was brought forward and passed — only for McCutcheon to announce that the cloture had inadvertently come too early, ending the possibility of amending the substitute further on the floor.

The revelation caused a stir among both parties as everyone tried to understand what had just happened. Democrats were particularly upset, as Chestnut had just been told his amendment would be considered and could now not be recognized.

The bill was resolved through conference committee and finally passed in both chambers.

As the Alabama Senate convened for the first time Oct. 28, the chamber saw the introduction of the Senate and Alabama Board of Education district maps, along with a bill proposing $80 million in American Rescue Act funds be transferred for use in Alabama hospitals and nursing homes.

Before the close of the journal Thursday night, state Sens. Arthur Orr, R-Decatur; Chris Elliot, R-Fairhope; Sam Givhan, R-Huntsville; and Tom Butler, R-Madison, all introduced bills related to the federal vaccine mandate. Of those filed Thursday, only Elliot’s SB9, which allows for exemption from mandated COVID-19 vaccines under medical or religious terms, reached final passage at the close of the special session Nov. 4.

None made it to final passage.

After a favorable report in the Senate Finance and Taxation General Fund committee Oct. 29, the first real debate on each of the Senate’s proposed district maps came on Monday, where the primary concern levied from the Democratic side were the “unnecessary splits,” according to Minority Leader Singleton, and whether whole county provisions were considered by the bill’s sponsor, Sen. Jim McClendon, R-Springville.

Former Senate Minority Leader Vivian Davis Figures, D-Mobile, also demanded answers for the overwhelming number of new white voters introduced into her majority-Black District 33, describing the new district lines as “one of the most explicit examples of racial gerrymandering in the history of this state.”

Both district maps were ultimately passed, largely along party lines, sending them towards the House for passage and eventually the Governor’s office. Also passed was the $80 million in American Rescue Act funds for Alabama hospitals and nursing homes, which received unanimous support.

Also that Monday, the two front-runner anti-vaccine mandate bills, Senate Bill 9 from Elliot, and Senate Bill 15 from Orr, received a favorable report in the Senate Finance and Taxation General Fund committee, which passed it back to the Senate for consideration. Singleton vowed to fight the bills in the Senate the next day.

Tuesday saw the passage of both SB9 and SB15 in the Senate, with Republicans cloturing the debate from Senate Democrats at around two hours into deliberations.

On Wednesday, the U.S congressional and Alabama House district reached final passage, with near lockstep opposition from Senate Democratic and unanimous support from Republicans. State Sen. Rodger Smitherman, D-Birmingham, proposed a substitution for the U.S congressional map created by the League of Women Voters. It would keep counties whole and provide for a swing district in the Alabama 6th, along with modifying the only minority-majority district, District 7, that would make the district no longer majority black.

According to Smitherman, the district would remain majority-minority through the vote of other minorities groups living within the district lines.

McClendon criticized the substitute, particularly the would-be swing district in the 6th, which he said would “pit two incumbents” together. The substitution, along with others from both Republicans and Democrats on the U.S congressional districts, failed on the Senate floor.

Both bills passed and were sent to Ivey for a signature.

The anti-vaccine mandate bills arrived back in the Senate Thursday, with Orr’s bill looking entirely different from its original state. As enrolled, it requires parental consent for minors to receive a COVID-19 vaccine, along with blocking public schools from inquiring about a student’s vaccination status. Elliot’s bill likewise took on revisions, fleshing out medical exemptions and including one medical exemption option requiring a healthcare provider to sign off. Signed by Ivey, the bill allows Alabamians to claim medical or religious exemption from getting a COVID-19 vaccine.

Both pieces of legislation passed in the Senate late Thursday evening, with Singleton the only Democrat remaining in the Senate chambers to vote against the measure.

Ivey signed the bills into law the following day.