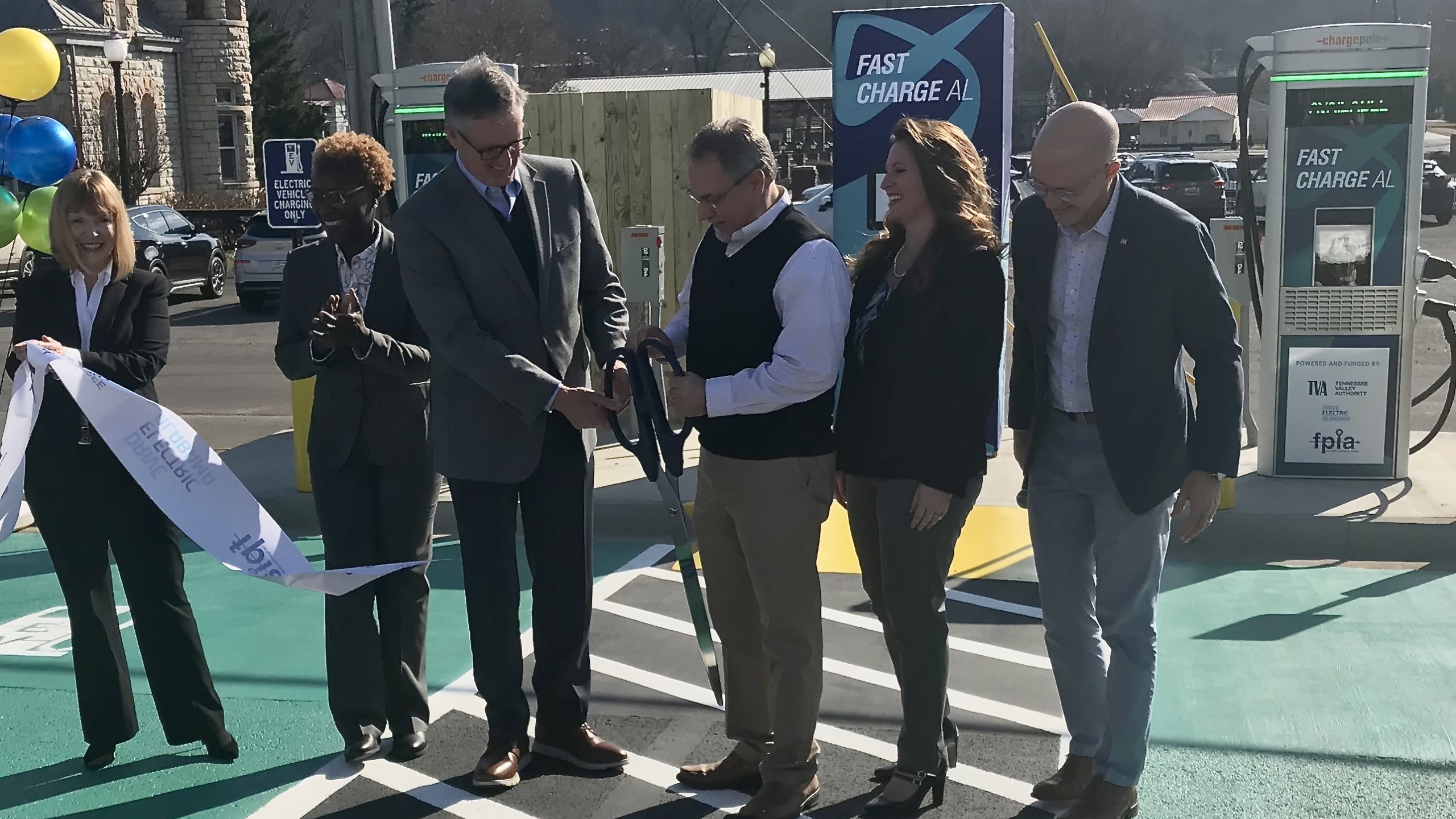 The unveiling of a electric charging station in Fort Payne, Alabama.

As automakers retool their factories, most of us are going to be driving an electric vehicle (EV) in the next 10 years. Fort Payne Improvement Authority (FPIA) is making sure Alabama is ready by removing one of the biggest barriers to EV adoption in the U.S. – fast charging infrastructure.

On Tuesday, FPIA announced at a ribbon-cutting ceremony the installation of two EV fast chargers at the intersection of 5th and Gault, making it the first operational charging site in TVA’s regional Fast Charge Network. The Fast Charge Network supports the broader National Electric Highway Coalition, enabling long-distance electric vehicle travel by placing public fast chargers every 50 miles along interstates and major highways throughout Alabama and across the United States.

This fast charger site was made possible through a partnership with the Tennessee Valley Authority (TVA), the Alabama Department of Economic and Community Affairs (ADECA) and Seven States Power Corporation.  TVA provided the DC fast chargers, and ADECA contributed over $45,000 from Alabama’s Volkswagen Mitigation trust grant program for electric vehicles.

“We moved quickly to participate in this program because we want to make it easy for people to choose EVs so our community can enjoy the environmental and economic benefits of electric transportation,” said FPIA’s General Manager, Mike Shirey. “The support from TVA and grant funding from ADECA made it possible to add charging stations without affecting our customers’ bills.”

The Alabama Department of Economic and Community Affairs (ADECA) and Seven States Power Corporation were additional partners recognized at the ceremony.

“We are showing the nation that once again Alabama is an electric vehicle leader with Fort Payne Improvement Authority’s deployment of the first charging station in TVA’s seven-state Fast Charge Network,” Governor Kay Ivey said. “FPIA’s charging station, and others like it, will keeping Alabama’s economy rolling by serving as a convenient place to charge EVs. When electric vehicle owners stop in our communities — large and small — to charge their vehicles, they are spending money with local businesses and creating a local economic impact in those areas while waiting for their car to charge.”

Seven States Power Corporation, an energy solutions cooperative owned and operated by the 153 local power companies across the Tennessee Valley, has provided technical and project management support to FPIA on this project.

“This is a great example of how through partnerships, we can design, develop and deploy technologies to enhance the communities in which we live, work and play,” said Betsey Kirk McCall, President and CEO of Seven States. “We are thrilled to partner with FPIA, TVA and ADECA on this project and create a blueprint for the rest of the Tennessee Valley.”

TVA has brought together local power companies, state agencies and others to pave the way for well over 200,000 EVs on Tennessee Valley roads by 2028.  The benefits this increase in EVs will provide to the Tennessee Valley region are significant:

“At TVA we’ve moved far beyond connecting communities with power lines,” said Jeannette Mills, TVA Executive Vice President and Chief External Relations Officer. “Today, EVs use our clean, low-cost, reliable electricity to connect communities and commerce across our seven-state region. By taking a leadership role in EV technology, TVA and local power companies like FPIA are not only saving drivers money but benefiting everyone in the Valley by attracting tourism and good jobs while stewarding our environment for future generations. These investments are possible because of our public power model.”

“This station does more than charging cars — it connects Fort Payne to the Fast Charge Network and plays an important role in putting our region on the leading edge of the new electric economy,” said Shirey.

In this article:ADECA, electric vehicles, infrastructure