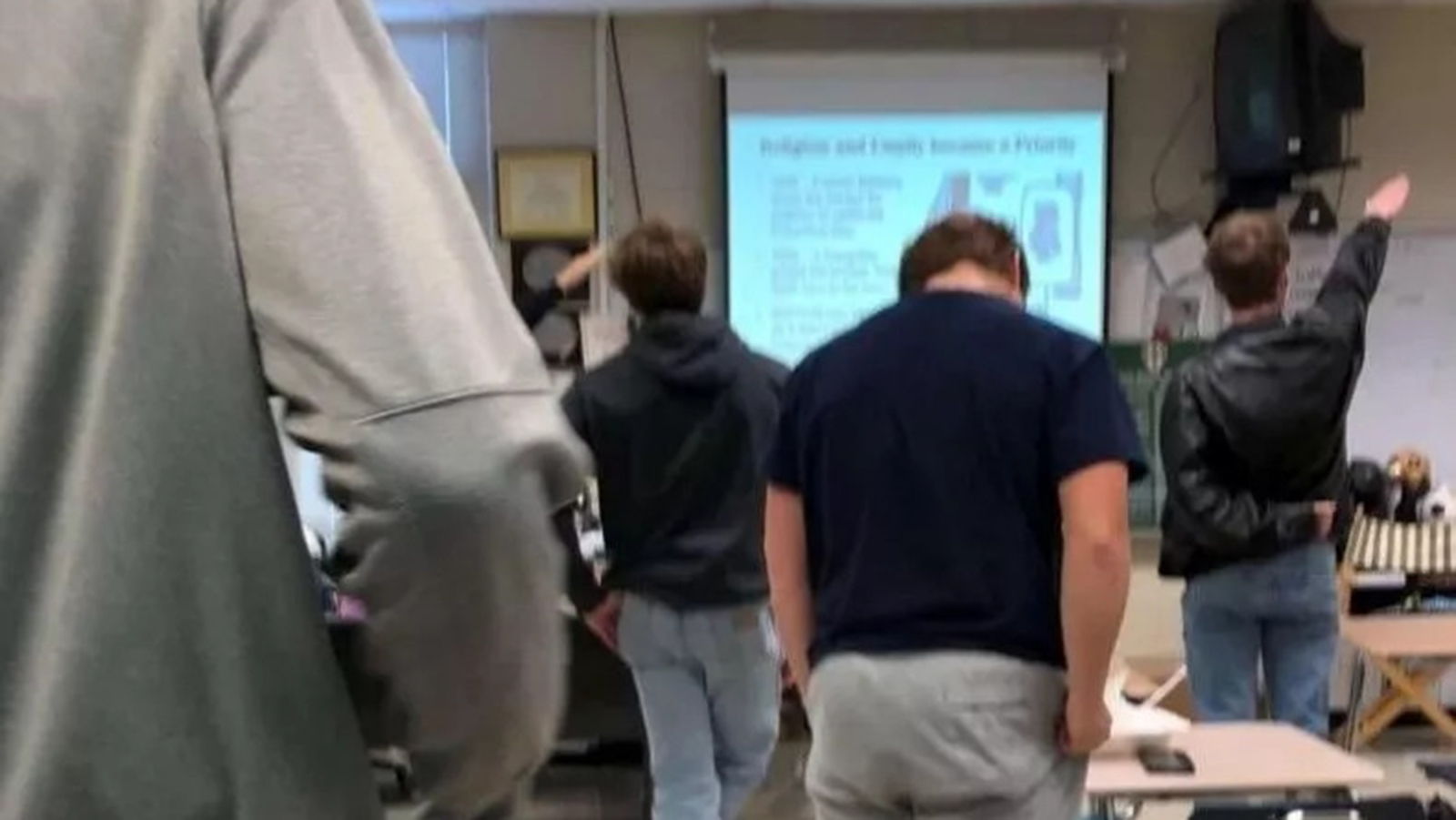 A photo from a Mountain Brook Facebook group shows students performing a salute that resembles the Nazi salute. (FACEBOOK)

Here’s what bothers me most about the controversy in Mountain Brook schools over a history teacher who demonstrated the Nazi salute to his class as part of a lesson.

A Jewish student who reported the “lesson” and posted a short video was reprimanded by the school system and told to apologize to the teacher. The student said he refused to apologize, as is his right – and good for him.

According to reports, when the teacher demonstrated the salute, a few other students in the class also saluted Nazi-style. Others declined. The teacher supposedly never told students to mimic the gesture.

But what is it with teachers who are so tone-deaf to symbols of hate and proper education that they bring those symbols into the classroom? What’s up with teachers who believe they have a teaching moment, then blindly go forward without even a little bit of consideration? No, the teacher wasn’t forcing his class to make the salute. Nor was he glorifying it. But clearly, he didn’t consider the ramifications of what he was doing that day in class.

As reported widely in local, state, national, and international media, however, the teacher did make the gesture. Writes Sarah Langcuster, an international educator and writer in the Birmingham area, in an opinion piece at AL.com: “Few people would believe that a teacher would intentionally instruct students to perform Nazi symbols or gestures in a history classroom. However, the mere fact that he performed the salute at all during the lesson coupled with the fact that other students stood up from their desks and participated in performing the salute, all while thousands of pictures exist online and textbooks of Nazi parades and symbolism that could have been used instead, is the larger and more serious issue. Thoughtless acts like these normalize everyday anti-Semitism and highlight the ignorance that many in the US face when confronted with the atrocities of rising anti-Semitic sentiments around the world.”

The Confederate battle flag, used by the states that seceded from the union from 1861 to 1865 during the American Civil War, only means racism today. There is nothing honorable about it, whatever some people think about its role in history.

And white supremacists use the Confederate battle flag as their symbol. It’s no secret. When that flag comes out, a racist is holding it.

The Mountain Brook mishap – and it was a mistake, whether Mountain Brook school officials or that teacher admit it – isn’t the first in Jefferson County.

In 2010, a math teacher at Corner High School used a lesson on angles in a geometry class to demonstrate how to shoot then-President Barack Obama’s ear off. The mistake in judgment, which the teacher admitted in a statement made through the Alabama Education Association, led to a short suspension of the teacher without pay. Before the story broke, the Secret Service visited with the teacher before determining he was no threat to the president. (He also filed a lawsuit against The Birmingham News, including me and two colleagues, but nothing ever came of the lawsuit, that I’m aware of.)

Poor judgment by teachers like this should never be tolerated in the classroom. Should we be OK with a teacher – somebody who presumably has the respect of his (or her) students and colleagues – whose judgment is so off-base that a geometric angle to shoot off Obama’s ear or who, for whatever reason, demonstrates the Nazi salute in a classroom, is fine? The Heil Hitler salute is viewed worldwide as a symbol of hate. Maybe at one time, the salute was benign. Not anymore. Once it becomes a symbol of hate, it’s a symbol of hate.

I’m a teacher. I understand the work that goes into trying to make a class interesting and to capture the attention of students. But there are lines we never should cross. I teach at UAB, one of the most diverse universities in the United States, and I know that I have students of every religion (or no religion), of every background.

One problem in Mountain Brook schools, of course, is that the school system has very little diversity. It’s a system that consists of mainly white students. Still, would the school system tolerate a teacher bringing in a Confederate flag into the classroom and arguing it used to mean something other than the suppression of Black Americans?

Mountain Brook certainly had no reason to go after the student who reported the incident. That was just a CYA move by school administrators.

The student, Ephraim Tytell, who posted the brief video of the Nazi salute, was quoted in The Times of Israel: “They proceeded to tell me that I’m making Mountain Brook look bad for uploading the video and sharing it and asked me to apologize to my teacher, which I refused to. The day after, he made our class, and our class only, put up our phones and he moved me from sitting in the back of the class to right next to him.”

These folks believe that “shooting the messenger” is better than making sure their teachers understand that they must be aware that certain lessons, no matter how well-intentioned, can wound and disturb students if they come across as completely insensitive.

This is what we see, time and again when an institution has to go on the defensive for an action that injures others. These officials are upset they were outed. They’re not so much interested in changing the mindset that leads to these terrible teaching mistakes.

They just want to make sure they aren’t tainted in some way.