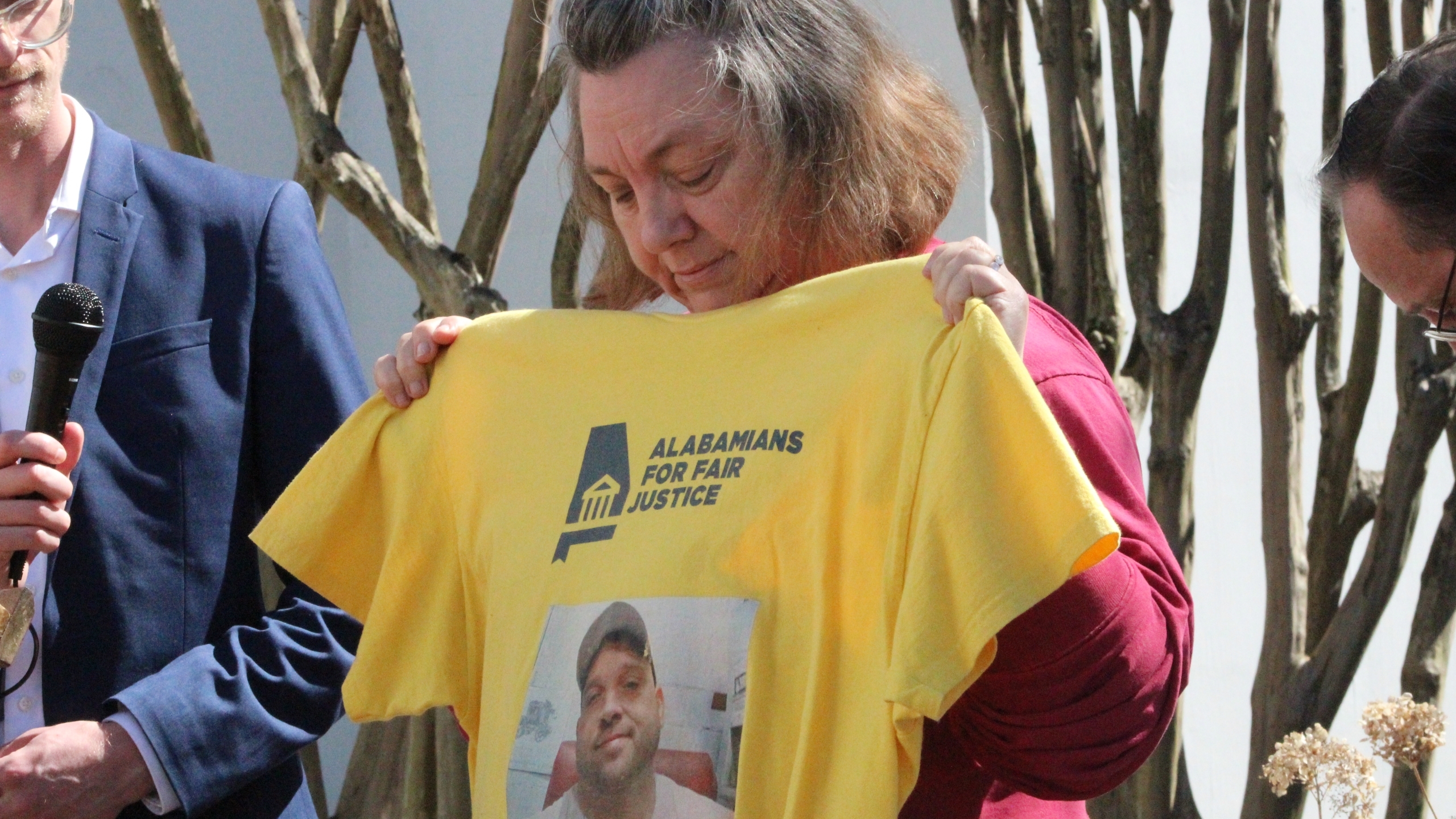 Diane Files holds up a shirt with a photo of her son, David, who remains in prison on a 2006 murder conviction despite being deemed a very low risk for reoffense. (Jacob Holmes / APR)

Rep. Chris England, D-Tuscaloosa, on Tuesday asked that his bill establishing oversight of the Alabama Board of Pardons and Parole be carried over.

On Wednesday, England participated in a conference in front of the Statehouse in support of the bill.

England said he pulled the bill in an effort to combat “misinformation” released Tuesday by Attorney General Steve Marshall.

“This bill is highly problematic in that it would undermine the board’s independence—a hard-fought victory of the 2019 reforms—and make it more difficult for the board to deny parole. I strongly oppose this effort,” Marshall said in the statement. “While there is room for debate on matters of criminal justice, these debates must include the perspective of law enforcement, prosecutors, and victims of crime. Our state’s violent crime rates are an undeniable scourge on many of our biggest cities and their suburbs. And, around the country, we have seen what happens when politicians fail to appreciate the practical consequences of progressive criminal justice policies. We should not continue to entertain such proposals here in Alabama.”

England said the 2019 bill Marshall is referencing was designed to crack down on the amount of people being paroled.

“What’s interesting is that he doesn’t mention the fact that the 2019 bill created parole guidelines that the board currently uses,” England said. “However, now they just ignore the recommendations.”

HB 57, England said, is designed to provide structure and hold the parole board accountable to its own guidelines.

“All HB57 would do is give meaning to what he supported back in 2019,” England said. “It would allow the Legislature to adopt a validated risk and needs assessment to objectively assist in making the final decision. Again, not taking away independence or authority, but giving evidence based help.”

Dillon Nettles, ACLU, said the actions of the board’s actions do not match with its stated values.

“This legislation enhances the accountability of the board by simply stating that the guidelines established by this Legislature in 2019 must be followed, or they must provide an actual reason when he board deviates from its guidelines,” Nettles said. “If you are denied parole in Alabama, you should know why.”

Diane Files spoke about her son David, who was denied parole in 2020 on a murder charge.

David Files was convicted in 2006 in the shooting death of his girlfriend, which he and his family have maintained was an accident induced by drug-fueled paranoia.

The family says David has taken 32 courses to rehabilitate while in prison and received the best possible score of 0 on his risk assessment test, meaning he is very unlikely to reoffend.

Diane Files held up a shirt with David’s photo on it and asked for passage of the bill.

“I’m a mother just like any mother whose child is in jail,” Diane Files said.

England said he is going to assist in working on the Senate version of the bill and plans to bring the bill forward again during the session.