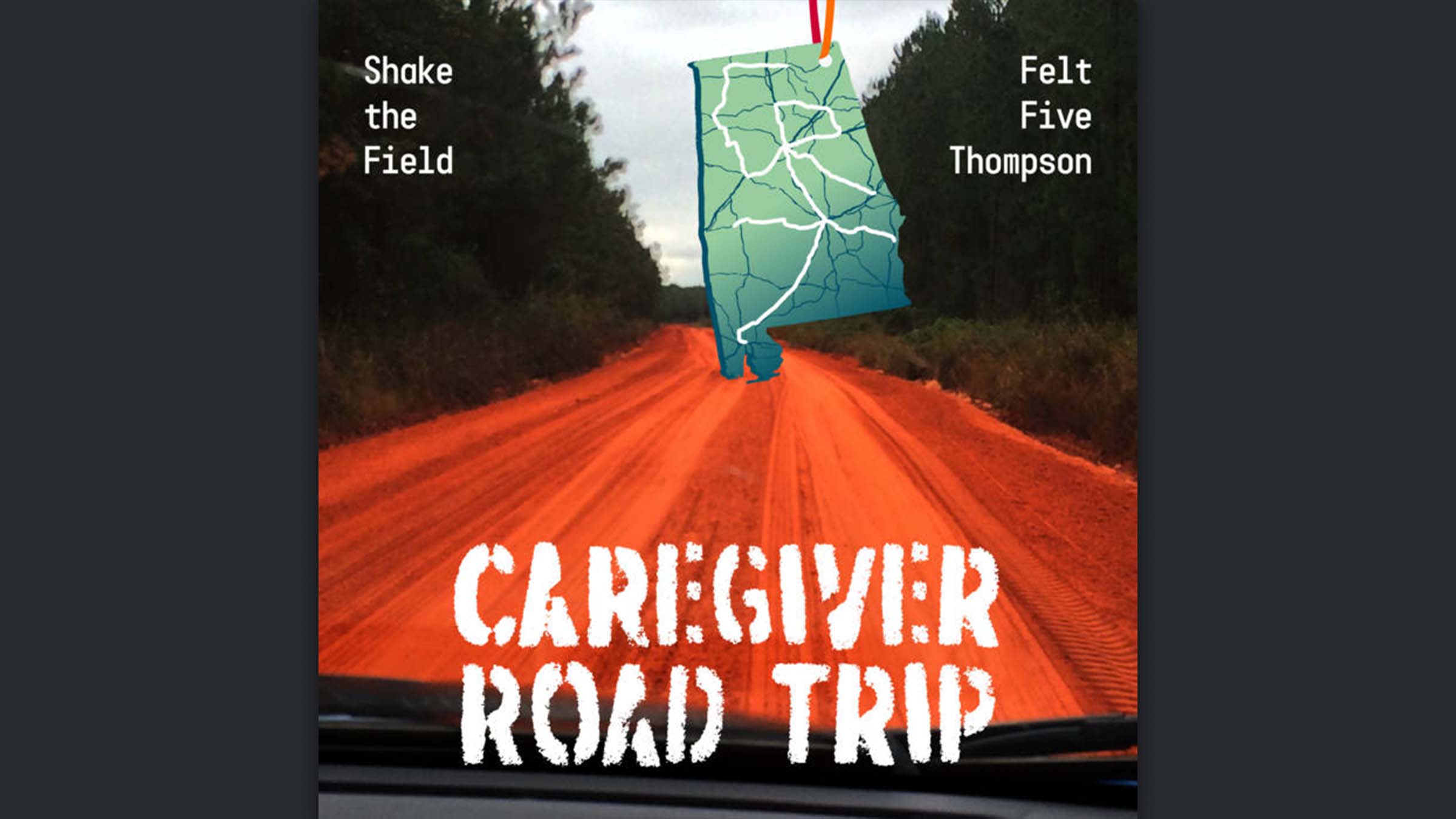 The first volume of Shake the Field's "Caregiver Road Trip" is available to stream now.

Shake The Field is releasing its second volume of its new album “Caregiver Road Trip” on July 12 and is sponsoring the songwriting contest “Pen It To Win It” to get more artists participating in civic engagement.

“As a universal language, music and creative expression have always served as a critical component of the social movements that have effectively pushed Alabama and the United States to live up to their stated democratic ideals,” the group said in a statement Friday. “It is difficult to imagine the American social movements of the past 100 years without the soundtracks provided by so many legendary musicians and cultural artists.”

Building on this tradition of cultural organizing and creative advocacy, Alabama Forward began developing Shake the Field in November 2020, as an initiative to support 18-45 year old Alabamians to cultivate civic identities and relationships that celebrate rather than reject the promise of expansive, multicultural democracy. The creative content produced by Shake the Field encourages Alabamians near and far to both embrace their identities as Alabamians and also embrace commitment to building more equitable communities by supporting Alabama’s civic engagement networks, diverse greenspaces, service efforts, and cultural scenes.

“Alabama’s commitment to a broken racial caste system doesn’t serve the majority of the people here well, and also runs a lot of homegrown folks off to other states where they go invent things, work hard, produce beautiful babies, and so on,” said Evan Milligan, executive director of Alabama Forward. “If we want the state to grow, we have to change that dynamic. Change requires inspiration. That’s where creative expression is so important.

“When they are inspired, younger people and creative people are often very willing to dig down and build creative spaces. We want them to do that here and if they choose to live elsewhere, to represent their homes well and also support what’s happening here. We are nurturing a network in Alabama that offers unique peer support to our creative and community-oriented neighbors of all ages. We want them to know that Alabama has a place for them as long as they have a place for Alabama in their hearts. Nobody can decide for them what it means to be from here. They can build their own identities.”

As its first widely distributed project, Shake the Field’s “Caregiver Road Trip” album is a vehicle to connect people with the idea of applying imagination and culture to the hard work of building community. The 16-song project is divided into two volumes, each featuring eight songs. Volume One of the project is titled “The Phone is the Industry” and is currently available on all streaming platforms. Volume Two of the project, “Rise of the River Children” will be released on streaming services on July 12. A special extended version of the album is currently available via bandcamp here.

“I hope people listen to the project and understand the gravity of everything we’re talking about,” Felton “Felt Five” Thompson, featured vocalist and producer on the album, said.  “I hope it educates folks who may not know about some of the issues happening in our state, particularly with songs like ‘1901’ and “R&R’. I hope it energizes organizers and people in general and that they enjoy the great music.”

“Shake the Field is more collaborative than my work in other spaces. For example, if I’m building a song about prisons as a solo artist, I might have more colorful language so to speak,” Thompson laughed. “But with this camp, we’re thinking about each song almost like a movie. There’s a story. There’s visuals. There’s layers of different meanings. So with “Needles” we make a song that is talking about the violence in our DOC prisons, addiction, the death penalty, the use of the COVID funds to build other prisons. All in a way that stands up on its own as a song. That’s the power of collaboration that we’re tapping into.”

Khadidah Stone works as a data and training manager in service of Alabama Forward’s member groups. She also has deep roots in soul, gospel and country music. She is featured on the song “Narissa’s Home (Just One)”, posthumously titled in honor of her close friend Narissa McNeal. “I’ve always dreamed of being a part of something like this. For so long I felt alienated as a young person knowing what’s going on and wanting to help my peers have certain opportunities but not being a part of a network that had the resources to make it happen. Shake the Field is a dream come true for me.”

Stone said she hopes the Shake the Field collective and the “Caregiver Road Trip” volumes will touch people in Alabama and around the country.

“This is about the people. It’s about the collective. It’s about the whole state. And anytime we are being of service to others, I think the work has no other choice but to be something that touches many people’s lives. We talk about very relatable issues and it’s timely, given all that is going on in our country right now.”

Echoing Stone, Shamar “Henny” Ford, an emcee, songwriter, and visual artist, said he has been very happy to experience the collective building and sharing of knowledge at the core of Shake the Field’s mission.

Alden “Young AJ” Harris Jr., a 10-year-old aspiring producer and songwriter featured on the song “Water” explained that for him, Shake the Field blends two or three genres of music to create new styles. “I think the project is dope.”

Veteran music producer, classically trained pianist, and studio engineer Bao Pham has a roster of album credits that includes a who’s who of leading hip-hop artists including Doe B and Jay Z. He is currently working with American Idol’s recent Top 10 finalist Lady K on an upcoming project. Pham worked as co-producer and mastering engineer on the project, and stated, “I’ve definitely enjoyed the different subject matter concerning real issues that are not prevalent or being pushed in modern music.” Pham said that working on Caregiver Road Trip gave him an opportunity to explore eclectic sounds while working on music designed to explore difficult and real issues from a place of hope rather than negativity or commercialization. “This music is needed to balance out the current era.”

Hanna Kim is a multiinstrumentalist, visual artist, and graphic designer who has helped Shake the Field design unique typography, its logos, and the cover art for the Caregiver Road Trip singles and albums. Kim said, “I hope this project can be a breath of fresh air for people who have seen all kinds of activist work, but maybe feel jaded or hopeless. These songs are written in so many layers. They have deep a complexity. I wanted to create visual art that helps show but not tell ideas from the songs in very simple ways. I relied on restraint and simplicity in my designs so we didn’t drown the pieces with too much information and fail to make emotional connection, which is really what good social movements do. The visual art plays a role in that as well.”

In addition to visual art, promotion and outreach are also critical components of effective social movements. Live performance provides the premier opportunity for Shake the FIeld to introduce their unique content to new audiences. Shake the Field is working with Alabama Forward member groups and supporters around the state to collaborate with local creatives at small music festivals, community block parties, and home concerts. The goal is to start with spirited performances in front of small crowds that are also recorded and then shared over STF’s digital platforms. Tamika “DJ Meek” McGhee of Montgomery’s 100.5 FM explained, “Doing the small shows is about making a really big impact without doing a whole lot. Doing a lot with a little. I think about NPR’s Tiny Desk concert series for example. We want to create a dope vibe based on using the power of words for construction, and not only destruction. We want to build with people who appreciate this, one small group at a time, in a way that translates on camera so that lots of other people can enjoy later.”

In addition to live performances over the summer, and an upcoming original musical, Shake the Field are also creating opportunities to hear back from community members via a feedback survey and also a unique songwriting contest. “To celebrate the release of ‘Caregiver Road Trip’ we are also inviting you to sing, rap, and shake your field of influence along with us,” said Deanna Fowler, Alabama Forward’s deputy director. “We know a lot of the people listening to our music are talented and creative themselves. Some may listen to our music and say ‘ I could do that!’. Good. A few will say ‘I can do better than that!’ Even better! That’s the confidence we want more of our neighbors to have. Not only in music but in terms of community leadership. But don’t just talk. Step up and show us what you’ve got.”

Fowler said for the contest, STF is looking for artists to remix or cover the song “Narissa’s Home (Just One)” from the album and share with the team.

“‘Narissa’s Home’ is very special to us,” Stone said. “Like all the songs, it’s written in layers. Most of all ‘Narissa’s Home’ encourages us to celebrate the way our loved ones grow with us over time, make home what it is, and us who we are. Given the importance of home, it’s even more important that the people in our hometowns are given fair opportunities to participate in the political process through voting rights protection and fair political maps. We talk about this in our outreach work, and through ‘Narissa’s Home’, we explore the same subjects through music and dance.”

To participate, artists must register and submit a video and audio file featuring their rendition of the song, along with a 60-90 second video sharing what the song means to you and details about your version of the song.

The rules of the contest are simple:

There will be seven regional winners who will win prizes such as produced tracks, promotion via STF channels and headshots. The grand prize winner will receive tracks produced by Felt Five; social media promotion via STF channels, access to creative assets, headshots, a one-year subscription for music editing software, logo and album/single cover art, studio time and more.

Additionally, there will be community music events throughout the state this year, and Shake the Field is seeking local artists across Alabama to perform. Details on these community events will be distributed at a later date.

If you have questions, please email [email protected] or you can access more information here.

In this article:album, Caregiver Road Trip, grassroots, music, Pen It To Win It, shake the field, social movement, songwriting contest

The Alabama Election Protection Network says changes to congressional districts will take time. Local redistricting might be a different story.

Thursday, First Congressional District State Representative Chris Pringle, R-Mobile, announced a list of county grassroots leaders from across the district in support of his...

Monday, Congressman Bradley Byrne (R-Montrose) announced the launch of his Grassroots Leadership Team for his bid to win the Republican nomination for U.S. Senate....