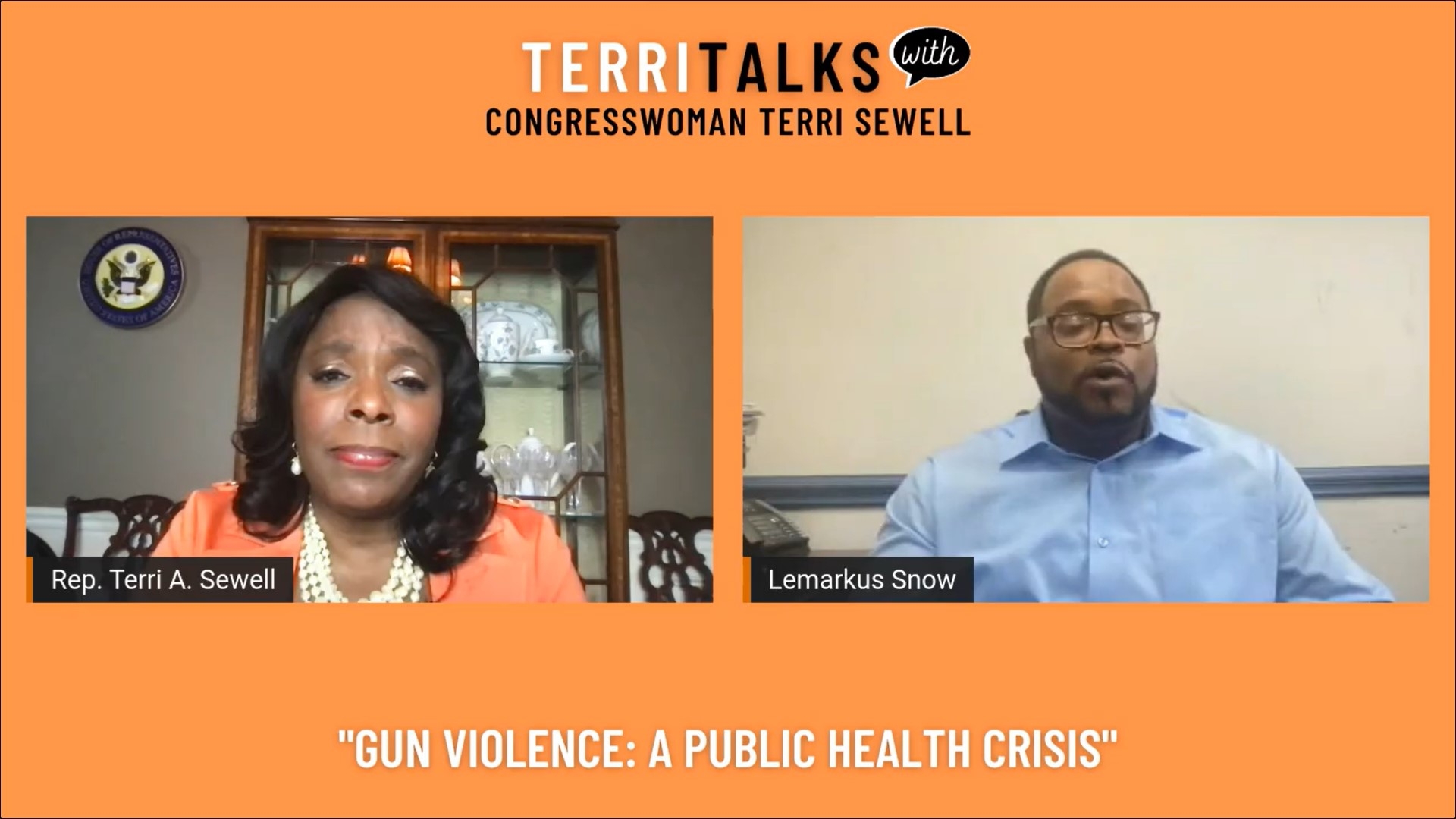 The discussion comes as the latest piece of ill-fated legislation to expand the nation’s federal gun laws in the wake of the previous week’s mass shootings in Buffalo, Uvalde, and Tulsa passed largely along party lines in the U.S. House of Representatives — Sewell being the sole member of the Alabama delegation to vote in favor of the measure. The legislation would increase the legal purchasing age for semiautomatic weapons to 21 years old, and place an outright ban on high-capacity magazines.

In the time since the discussion Thursday, a bipartisan group of senators announced Sunday a tentative gun safety package which, though temperate in comparison to the House gun control package, enhances background checks, adds funding for state red-flag laws, and closes the so-called “boyfriend loophole” that, if the measures succeeds in Congress, would bar individuals convicted of domestic violence on a dating partner from purchasing a gun.

“This crisis is simply unacceptable; Our nation must take common-sense actions to stop the rising tide of gun violence that has claimed far too many lives,” Sewell said during the discussion Thursday. “Sadly, too many of our elected officials have chosen inaction in the face of these continued senseless killings. Now more than ever, we, the Congress, must act, put aside our party politics and work together in the best interest of our nation to reduce gun violence and protect all Americans.”

“Right here in Montgomery County, we just had a 14-year-old that was charged with murder from shooting,” said Montgomery County Sheriff Derrick Cunningham during the discussion Thursday. “And that’s just one of them.”

According to CDC data analyzed by Johns Hopkins University, Alabama saw a 16 percent increase in gun homicides between 2019 and 2020, which likely worsened in 2021 as homicides increased nationwide during the pandemic. Alabama has the fifth-highest gun death rate in the country at a rate of 23.58 per 100,000 and the nation’s third-highest gun homicide rate.

The Alabama State Legislature passed in March a bill allowing possession of a concealed weapon without a permit, a decision that took a “beneficial tool” away from Alabama law enforcement, according to Cunningham.

“This is something that we fought against, and this bill still got through us,” Cunningham said. “For the young guys and girls that I have working for me, their families want them to be able to come home every day. But now we’ve just opened up the door so that people can get up in the morning, when they get dressed they can slide [a firearm] down on their side or put it on their ankle, they can do whatever they want to cover it up and walk around in our community without having to have a permit.”

LeMarkus Snow, a community activist and former gang member who served six years in federal prison, mentioned the recent shooting of a dog and his owner by juveniles in Selma, a city with below 18,000 residents.

“For the population of Selma being so small, in the last 18 months, we’ve had over 27 Black on Black murders in the city of Selma,” Snow said, mentioning the high-capacity magazines used by criminals. “The guns and the clips and everything that’s on the city of Selma’s streets is just ridiculous.”

Snow also said the permit-less concealed carry bill passed in March will make it “harder and worse for police officers and public safety officers to do their job.”

“The police, already walking to the car, is in fear of their life anyway,” Snow said. “If he sees a gun in the vehicle, he may shoot me. If I reach for it, I might get shot. So, they put all the sheriff’s department and police departments, the FBI, the ATF, everybody in harm’s way.”

Commercial sellers of firearms in Alabama require a federal background check through the FBI’s National Instant Criminal Background Check System, with a background check mandate for private sales not required whatsoever. Montgomery-based mental health therapist Fightress Aaron said that the process, specifically evaluating whether a person is mentally healthy enough to possess a firearm, should be stricter when purchasing a weapon.

“There needs to be more background,” Aaron said. “Just checking a box saying ‘Do you suffer from mental illness? Yes or no,’ that’s not enough. It is just not enough to keep the guns out of the hands of the people that are committing these crimes.”

Aaron also mentioned that while mental illness is often used as an explanation for the why individuals commit acts of mass violence, which is defined as violent crimes where four or more people are killed, mental illness or a mental health crisis can only account for a small number of non-mass killings instances of gun violence.

According to a 2019 study conducted by the National Council for Behavioral Health, one-third of mass killings are committed by individuals with mental problems, but less than four percent of all violent acts committed in the United States can be linked back to mental illness.