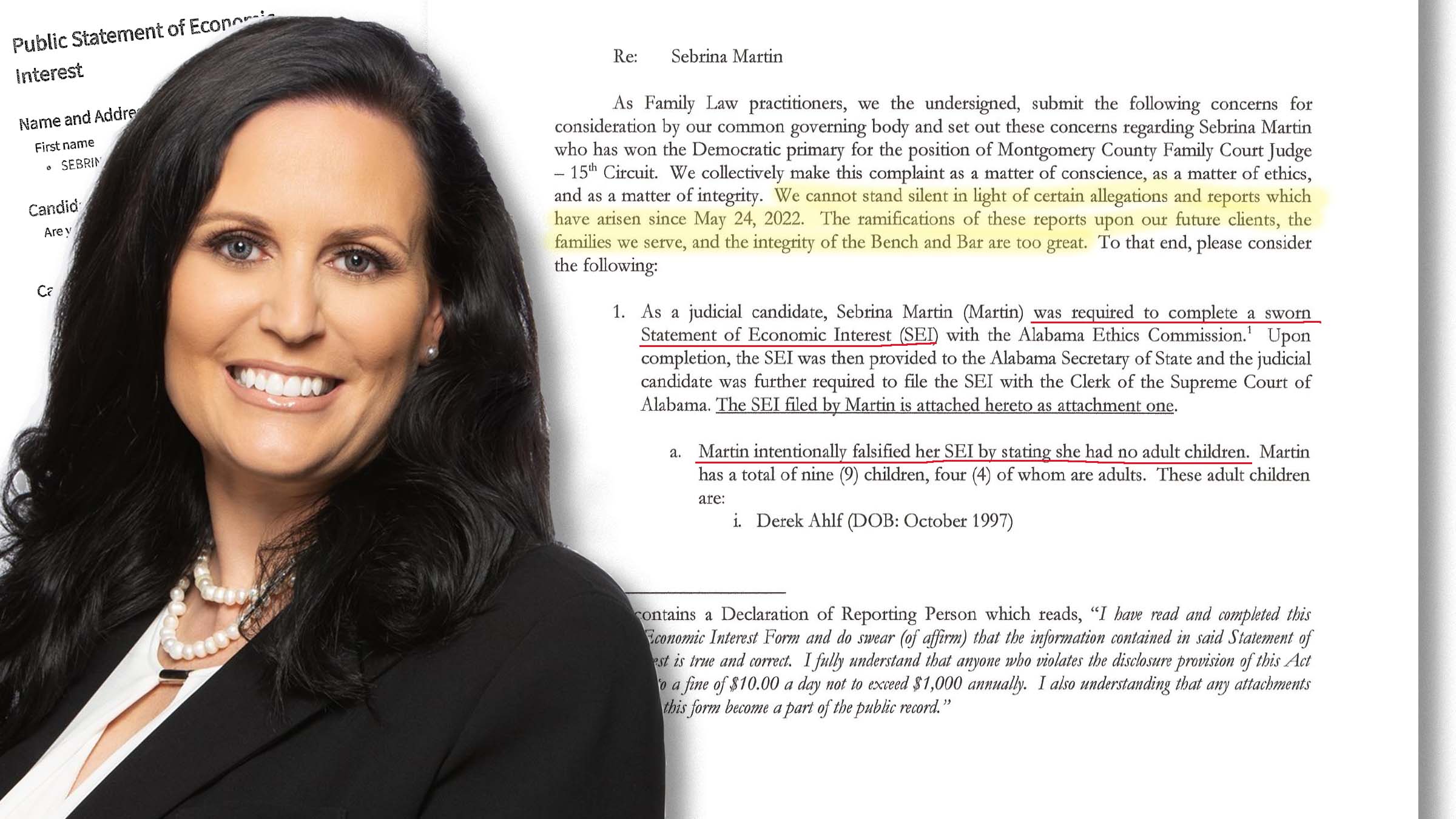 In a letter dated June 15, 2022, 32 lawyers called for investigation and action to prevent Sebrina Martin from becoming a family court judge.

A letter obtained by APR Thursday and signed by 32 family law practitioners called for an investigation and appropriate action against Sebrina Martin in light of the revelation that Martin lost custody of six children for excessive corporal punishment in 2013.

“We collectively make this complaint as a matter of conscience, as a matter of ethics, and as a matter of integrity,” the letter states. “We cannot stand silent in light of certain allegations and reports which have arisen since May 24, 2022. The ramifications of these reports upon our future clients, the families we serve, and the integrity of the Bench and Bar are too great.”

APR obtained the original 2013 court order after Martin had already won the Democratic nomination to serve as family court judge on Montgomery’s 15th Judicial Circuit. APR published an article on Thursday, June 9 detailing the court order and sharing the stories of two of Martin’s now adult children, Jasmine and Sydney. A week later, APR published another story with the recollection of a third adult child, Jonathan.

“We the undersigned believe it to be soul-searing to consider an attorney who lost custody of six children due to excessive corporal punishment could take the Oath and preside as a Judge with the blessing of your organization,” the letter states. “The Court Order from Indiana is very clear that Martin minimized the physical abuse of her children, thereby showing an inability or unwillingness to protect her own children. Martin failed to show protective capacity as evidenced by the Court Order from Indiana.”

On her latest statement of economic interest, a required form for all candidates, Sebrina Martin said she did not have any living adult children. In a video statement on Friday, June 17, Martin claimed the form was completed by campaign staff and that the response was a regrettable error that has since been corrected. In addition to failing to identify her living adult children, the letter states that the digital version of the form, inaccessible to the public, would also require Martin to name her minor children.

Because the form is also required to be filed with the Alabama Supreme Court, the letter contends that Martin may have violated another of her duties as a licensed attorney.

“If Martin filed her SEI with the Clerk of the Supreme Court of Alabama as required, she has then provided false information to the Court,” the letter says. “As a licensed attorney, Martin has a duty of candor pursuant to Rule 3.3 Alabama Rules of Professional Responsibility before tribunals, including, but not limited to, the Supreme Court.”

The letter claims that Martin violated multiple rules of professional responsibility in regards to the SEI form and in multiple statements made while campaigning.

“Martin committed perjury by filing a sworn SEI statement containing false information and, therefore, reflecting adversely on the lawyer’s honesty, trustworthiness and fitness as a lawyer as set forth in Rule 8.4(b) and (c) of the Alabama Rules of Professional Responsibility,” the letter states.

The letter claims Martin further violated these rules at a candidates’ forum held by Delta Sigma Theta sorority on April 28, 2022, when she told the audience she had two children.

“This statement was false and was intentionally designed to be dishonest, deceitful, and involved dishonesty, fraud, deceit and misrepresentation,” the lawyers wrote.

They say Martin violated the rules once again in her June 17 video statement, saying she “knowingly made false statements” when she said a campaign staffer had filled out the form despite it being a sworn document. The letter states this in direct contradiction to her statements made at the forum, and does not explain why Martin failed to identify her living adult children on two previous SEI forms.

“It should also be noted that Martin’s duties as a judge will likely involve others assisting in the preparation of judicial orders,” the letter stated. “Martin’s alleged failure to adequately review the SEl(s) before affixing her sworn signature to the form raises serious questions as to her propensity to ‘rubber stamp’ official documents without proper review.”

“This communication was calculated to mislead potential voters into thinking that Martin was already a Circuit Judge,” the letter says. “In addition, the printed material lacked the information required by the Fair Campaign Act as it failed to state who was responsible for the advertisement and who paid the costs of same.”

The fourth section of the letter says Martin violated section 17-17-55 of the Code of Alabama by intentionally confusing voters before the primary.

“On or about May 24, 2022, the primary election day, Martin and people in her campaign employ, circulated misleading ‘Sample Ballots’ in violation of the Code of Alabama and which were aimed at deceiving Democratic voters into believing they were receiving guidance from the Alabama Democratic Conference (ADC),” the letter states. “Martin, and/or people in her employ, created and disseminated a deceptive yellow ballot that displayed the NSC endorsed candidates which included Martin. Martin paid multiple people at numerous polling locations to pass out the deceptive yellow ballot along with her campaign literature with many wearing her campaign t-shirts. The deceptive yellow ballots were misleading and calculated to entice Democratic voters to believe it was the official Ballot Guide of the ADC with the intent to give voters the impression that Martin had been endorsed by the Alabama Democratic Conference when she had not.”

The letter includes attachments, including examples of the alleged misleading sample ballots.

In addition to the specifically addressed violations, the letter also brings up other concerns, including Martin’s apparent failure to pay child support and the adoption of two children presumably after the 2013 custody order.

“Paragraph sixteen (16) of the Court Order from July 2013 states, infer alia, the mother’s child support shall be recalculated upon the mother’s employment yet there appears to be no evidence or record of Martin ever complying with this Court Order,” the letter states. “Further, the July 2013 Order enjoined Martin’s then boyfriend (and now husband) Jessie Heifner, from being in the presence of her Indiana minor children without Martin being present, yet Martin subsequently adopted two more children who reside in the home with Martin and Heifner, who is also an attorney.”

The letter calls for an investigation by the “appropriate and able body” investigate the confidential documents pertaining to the adoption of  the two children in Martin’s custody for “further obfuscations, prevarications, and omissions.”

“It is unfathomable that, had the investigation been completed with accurate information, Martin would have been allowed to adopt,” the letter states. “Heifner is enjoined from being alone with her other children. It begs belief that two different adoptions were approved given the Indiana Order from 2013 if it was disclosed to the tribunal and to the adoption placement investigation. Either Martin was untruthful in the adoption process, or the system failed to protect the children she adopted.”

First and foremost, the letter pleads to the addressed organizations to consider their concerns in deciding whether to allow Martin to remain on the ballot for family court judge.

“It is a matter of urgency and extreme importance that the Alabama State Bar, the Alabama Democratic Party, and the Alabama Secretary of State address the competency and character of Martin in the role of a family court judge,” the lawyers say in the letter. “For us, representing clients whose legal matters will predominantly include the very issues for which Martin is culpable, will be difficult, if not impossible if Martin is the assigned Judge to the case.

“Further, there will be an critical responsibility for attorneys to disclose the facts and Indiana Order concerning Martin to their clients, especially clients facing the same or similar circumstances; i.e. clients seeking to modify custody due to excessive corporal punishment or other bad behavior by a significant other; contempt for failure to provide income information upon becoming employed for the calculation of child support; failure to pay child support in accordance with an Order; or modification of custody due to a lack of protective capacity. The recent video statement made by Martin in her own defense regarding children who arc ‘weaponized’ and believed ‘instantly,’ indicates a strong bias which further disqualifies Martin from the family law bench.”