After a national search, the city of Birmingham has selected David Arias to serve as executive director of Sloss Furnaces. Arias began his role on August 15, taking the helm from Karen Utz who served a successful tenure as interim executive.

“David’s track record of servant leadership and fiscal innovation will help take Sloss Furnaces into its next chapter,” Mayor Woodfin said. “We are thrilled to welcome him.” 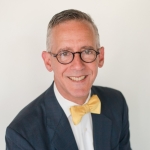 Arias joins Sloss Furnaces after a long career in finance and nonprofit leadership, most recently as chief development officer for one of the largest nonprofit veterinary hospitals in the United States. He also served in leadership roles at Shelby Humane, Magic City Harvest, and Humane Society of Northeast Georgia. In addition, Arias is the chairman of the board of directors for the Olympic sport USA Fencing. He received a bachelor’s degree from the University of Alabama at Birmingham and an MBA from the University of Alabama.

“I’d like to encourage people in our community to reach out and have a conversation about their experience with Sloss Furnaces, and what they would like to see in the future,” Arias said. “I also want to build on the good work that has already been done over the last 40 years.”

Arias plans to spend his first months visiting people and key partners throughout Birmingham to better understand the role that Sloss Furnaces play in the lives of people, students and other organizations. He’ll spend those visits and other interactions doing as much listening as he can. With that in mind, Arias invites anyone within the community to email him, beginning August 23 at [email protected]

Arias is a long-time resident of Birmingham and noted, “My wife and I were married in 1981, the same year Sloss Furnaces were designated a National Historic Landmark by the United States Department of the Interior.”