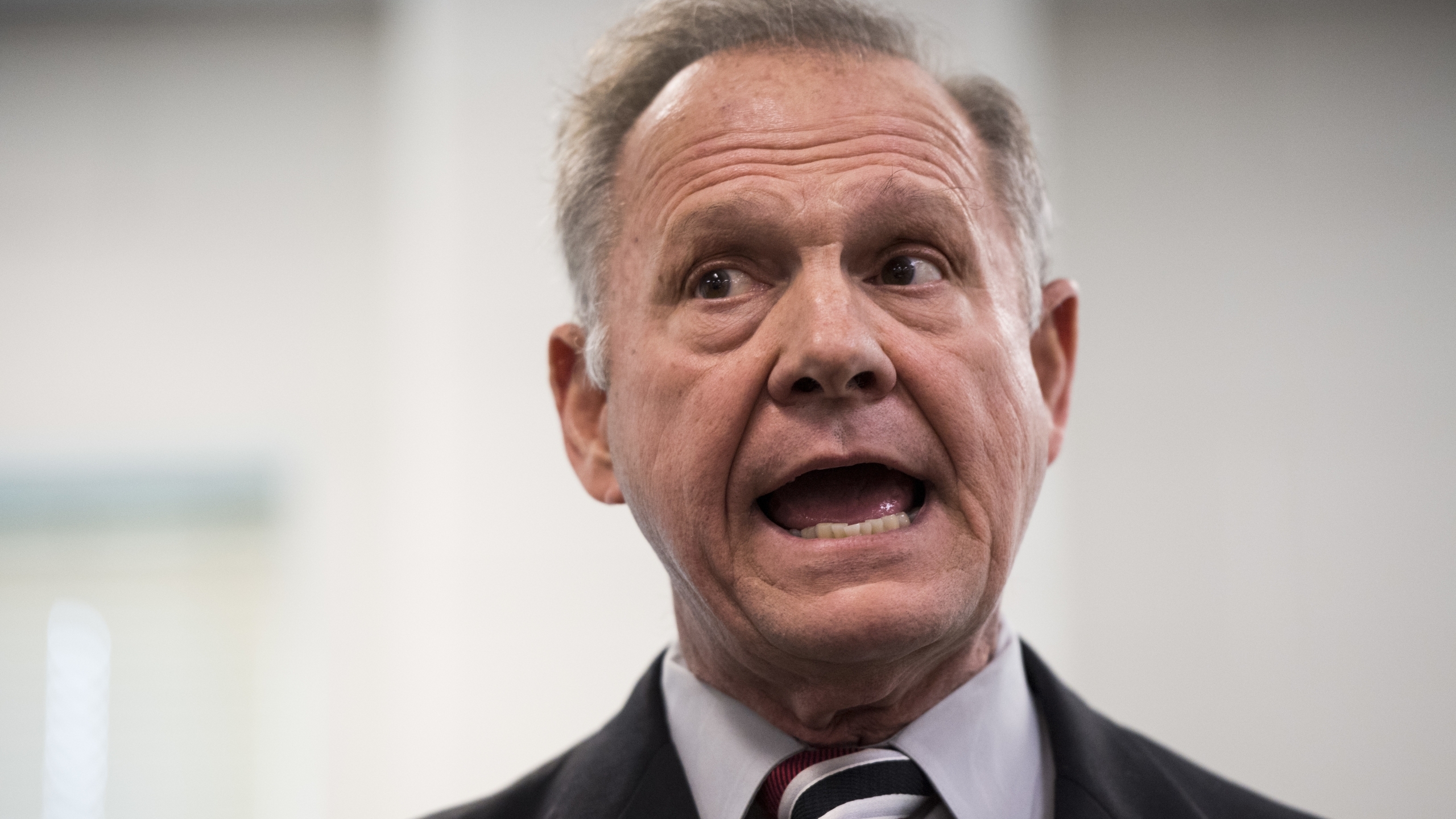 Say what you will about him, but Roy Stewart Moore, Esq. has had some kind of career in and outside of the courtoom.

From his West Point education and service in Vietnam, to his early private and prosecutorial work in Gadsden that culminated with a circuit court judgeship to his two – two! – terms as the chief justice of the Supreme Court of Alabama, he’s been a lot of places and done a lot of things. (He even lived in Australia for a year. Isn’t that wild?)

In terms of his political ambitions, he’s always itched for more. He took on incumbent Bob Riley in the 2015 GOP and failed – miserably. He ran in the 2017 special election to replace Jeff Sessions (a kindred putz who also flew too close to the political sun) and had more than a puncher’s chance against Democrat Doug Jones until the dastardly liberals at the Washington Post disclosed his consistent practice of seeking out teen girls for dates when he was in his 30s.

That story cleaved Moore’s career in twain, splitting it neatly between stints as a bigoted firebrand who could demagogue his way into office and a bigoted firebrand forever tarnished as a sad, weird little man whose last fights will play out in a courtroom rather than at the ballot box. But just as Moore has always been able to teach us about who we are as Alabamians, his various lawsuits – namely his most recent defamation cases – illustrate the distinction between winning and losing arguments and perhaps show an inability on his part to separate the two at this point in his career.

Setting aside a February case between Moore and one of his accusers that was basically a wash, Moore lost in July a federal Second Circuit Court defamation appeal against comedian Sacha Baron Cohen but won a similar case last week at trial in a suit against a Democratic Party-aligned super PAC. Again, both cases centered on accusations of defamation (with an additional claim of the intentional infliction of emotional distress in the Cohen case) but there were wildly different outcomes – with the Second Circuit upholding a motion to dismiss in a short, terse opinion and a trial jury awarding an $8.2 million verdict.

If Moore is the same character he’s always been and both cases arose from those same tawdry/pathetic Gadsden Mall claims, then what explains the different resolutions? The answer is, quite reasonably, that the Cohen case was hopeless from the beginning, whereas the defamation suit against the super PAC clearly had merits – so much so that I might be inclined to argue Moore should have won the case against the political action committee.

Moore’s suit against Cohen arose from an appearance on the comedian’s Showtime 2018 series, “Who Is America?”, a show in which the “Borat” performer engaged in his usual costumed shenanigans designed to entrap unknowing interview subjects in awkward and absurd situations in the general pursuit of satire.

For his interview with Moore, Cohen appeared as Israeli “anti-terror expert” Gen. Erran Morad, a militaristic square-jawed caricature seemingly created to appeal to both Moore’s conservative Christianity and his other assorted racial bigotries. The appearance goes sideways – of course – after Cohen pulls out a device with the purported ability to detect pedophiles only for it to beep when he waives it at Moore. After a painfully long back and forth conversation with multiple passes of the “device,” Moore leaves. “I am simply cutting this conversation right now,” he says. “I support Israel. I don’t support this kind of stuff.”

Before he sat down for the interview, however, Moore signed an agreement with Cohen’s phony production company that included a waiver of liability, a document that specifically barred claims of intentional infliction of emotional distress, defamation and fraud. Regardless of the subterfuge necessary to get to Moore to both sign the waiver and appear on the show and despite his attempt to cross out references in the document to “sexual oriented or offensive behavior or questioning,” the Second Circuit found the agreement’s plain text to be valid and a barrier to Moore’s case.

“Even if Judge Moore intended not to waive any claims arising from accusations of pedophilia or sexual misconduct,” the court concluded, “a party’s subjective intent and understanding of the terms is irrelevant.” In essence, just because Moore claimed he was mistaken as to the document’s purpose and terms, that doesn’t relieve him of the responsibilities – and consequences – of the words as they’re actually written.

The case, though, didn’t fail only due to the waiver. At its core, any argument Moore had for defamation rested on the comedic presentation of this pedophile-detection device and the central, necessary implication that Cohen was asserting that Moore was indeed a sex offender. However, to be defamatory, something must be an untrue statement of fact, meaning that reasonable people could interpret it as a factual assertion. In this case, the device, as the Second Circuit concluded, could not be defamatory because “no reasonable person could believe [it] to be an actual, functioning piece of technology.”

The remaining central claim, the intentional infliction of emotional distress as brought by Moore’s wife Kayla, failed under the reasoning outlined by two Supreme Court cases, Hustler v. Falwell and Snyder v. Phelps – cases that stand for the proposition that we can make fun of (and even be intentionally cruel to) newsmakers and those in the public spotlight.

The signed waiver, the lack of defamation and the Supreme Court case law backing up Cohen were apparent from the day Moore first filed the suit. Why it was brought and why it was appealed are questions only answerable by Moore and his attorneys, which include the famously litigious Larry Klayman.

Moore’s other recent case, a defamation suit against a super PAC supporting various Democratic U.S. Senate candidates across the country, was profoundly different – not only because he won last week at trial but also because it is a fundamentally solid case. In that suit against the Senate Majority PAC, Moore argued that two sentences from a political campaign ad defamed him: 1) “Moore was actually banned from the Gadsden Mall . . . for soliciting sex from young girls” and 2) “One he approached ‘was 14 and working as Santa’s helper.’”

Those sentences – if untrue, which the jury found them to be – are defamatory because they are clear statements of fact. Either Moore was or wasn’t banned from the mall. Either Moore “solicit[ed] sex from young girls” or he didn’t. These definitive statements are much different than Cohen’s fictional pedophile detector because they’re meant to be taken as fact – after all, why else would they be included in a campaign ad?

Senate Majority PAC relied at trial on the “substantial truth” doctrine, meaning that they claimed the ad was more or less true even if Moore was able to prove specific details were false. For example, in 2004, the Seventh Circuit upheld summary judgement in favor of the media defendants in a suit by an Islamic charity accused after 9/11 of funding terrorism because even though various outlets may have said literally incorrect statements about the charity’s association with terrorism, it was under investigation for that very thing.

But in the super PAC’s attempt to mount a defense to Moore’s claims, substantial truth comes up lacking. According to the original Post story, one woman, Leigh Corfman, said Moore “touched her over her bra and underpants” and “guided her hand to touch him over his underwear.” She was, indeed, 14 at the time. And yes, it’s generally the received truth that Moore was a weird creep in those Gadsden days, but his wildly, possibly criminal, courting practices in targeting and touching teens is not “soliciting sex from young girls,” especially given the connotation “soliciting” has in conjunction with sexual activities.

Political ads are to discourse as a rusty nail is to the bottom of your foot. But we should expect better. We should demandbetter. One way to achieve that outcome is to punish those who stray so far from the truth as to engage in defamation. And while Senate Majority PAC may continue to rely on the substantial truth doctrine on appeal – or perhaps argue that campaign ads are so wild and dysfunctional as to not be believable – that doesn’t feel like something that should carry the day.

Moore’s suit against the man best known as Kazakhstan’s most famous journalist may have been a pointless crusade against someone who metaphorically pulled his pants down on national television. But this other case has merit – and even importanceto those outside of Moore’s ever-shrinking sphere of relevance.We all want campaigns and other often nefarious political organizations to be honest and actually engage in speech that might aid our democracy, and Moore’s suit against Senate Majority PAC could be some small part of achieving that goal.

He’s done a lot in his career. Getting me to agree with him on something – anything – might be his most impressive accomplishment so far.