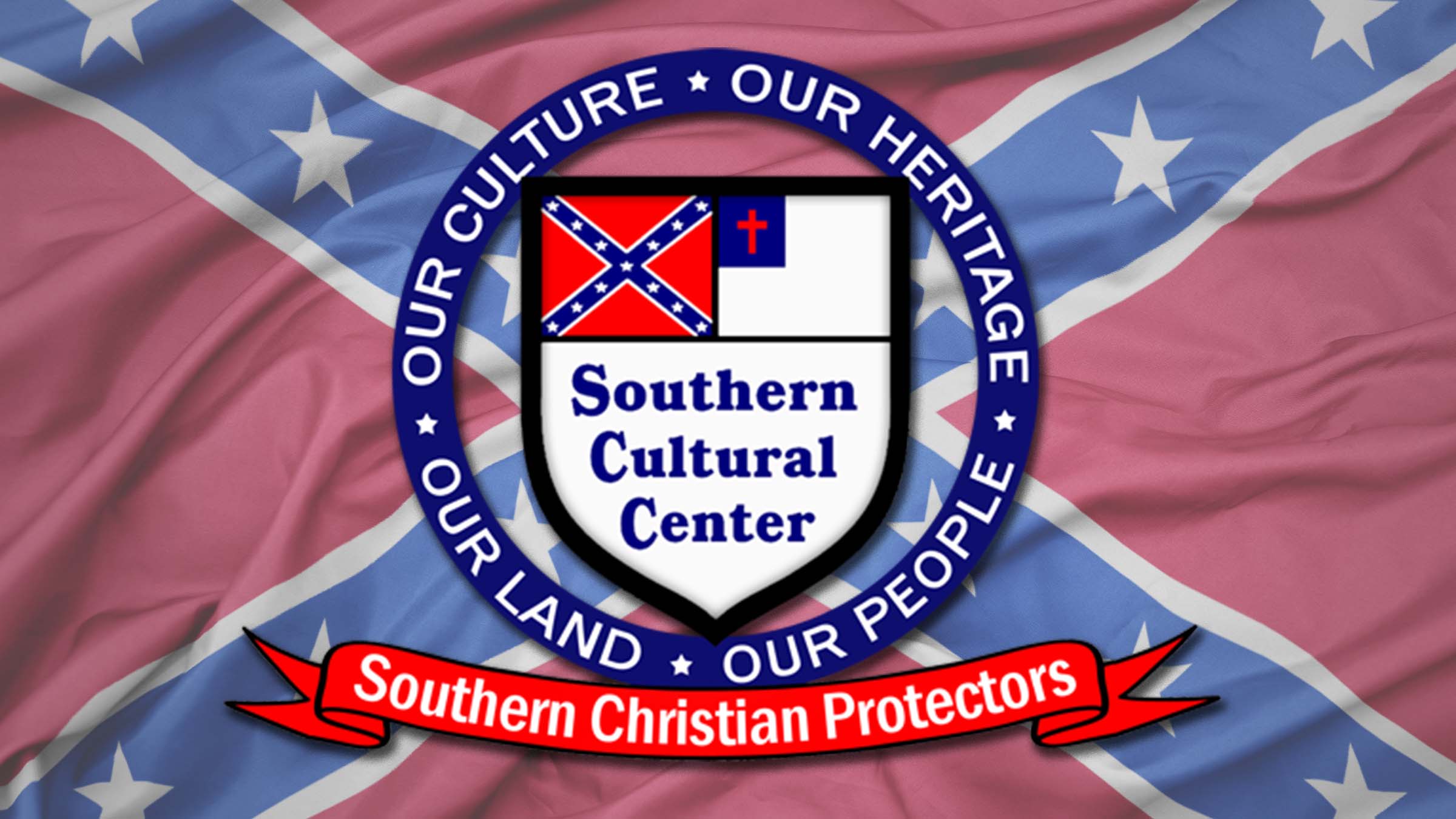 The logo of the Southern Cultural Center on a Confederate flag background. Jacob Holmes/APR

The event is billed as the inaugural SCC National Conference, with tickets giving attendees access to the two-day event that includes six speakers, a lunch, a supper and a performance by the band “Shades of Grey.”

The SCC, labeled a hate group by the Southern Poverty Law Center, states its goal is to reestablish a “free and independant (sic) Southern republic.”

“We envision the States peacefully and lawfully exercising their right of self-determination and withdrawing from the present union dominated by an aggressive, centralized federal government; only then can a true constitutional republic, founded on the Bible and the original Constitution, once again exist in America,” the center’s website states.

The center once served as the site of the national conference for the League of the South, another Neo-Confederate group and a participant in the 2017 Unite the Right rally in Charlottesville, Virginia that led to the death of one woman protesting the event and the injuring of 35 others.

Mike Whorton, president of the Southern Cultural Center, split with the League of the South in 2018, leaving his post as chair of the Alabama chapter of the League and denying the LOS use of the building for its annual conference.

An SPLC report pointed to Facebook posts that show Whorton split with LOS due to discomfort with its growing militarism.

Since then, the Southern Cultural Center has continued to bring in speakers and host “jamborees” for members to celebrate Confederate history and Southern tradition and hear from speakers concerning the Confederate cause.

APR reached out to Whorton to request access to cover the event, but was denied.

“After taking under advisement the advice of the SCC Board, attendees and some of the speakers, we’ve decided not to admit media for the 2022 conference,” Whorton sent in a text.

One of the speakers for the event, John Weaver, is listed as a neo-Confederate extremist on the SPLC website.

“For years, Weaver was a leading member of the Council of Conservative Citizens, a hate group that opposes interracial marriage and has described black people as a ‘retrograde species of humanity,’” the SPLC profile states. “He also long served as chaplain to the Southern heritage group Sons of Confederate Veterans at a time when its leadership was largely controlled by racist extremists.”
Weaver is scheduled to open the conference with a lecture entitled “Is upsurged authority legitimate.” He will also speak on the second day with a speech titled “Is it right to resist tyrannical governments.”

The conference will also bring in Kirk Lyons, President of the Southern Legal Resource Center and a Texas nationalist secessionist. The conference program shows Lyons will be speaking on “de-annexation” and “Texit.” The Texas GOP voted in June to hold a referendum on seceding from the United States.

Ron and Don Kennedy, authors of “The South was right” will be speaking about their book and “how we can win.”

Clif McGhar will speak on “Neoconservative spirit in the Southland.”

Carl Jones, past Commander of the Alabama division of the Sons of Confederate Veterans, will speak on “Yankees, the South and the Union.”

Charles Schmitz will speak on “The Southern Agrarians and how we can live today.”

Jacob Holmes is a reporter at the Alabama Political Reporter. You can reach him at [email protected]porter.com