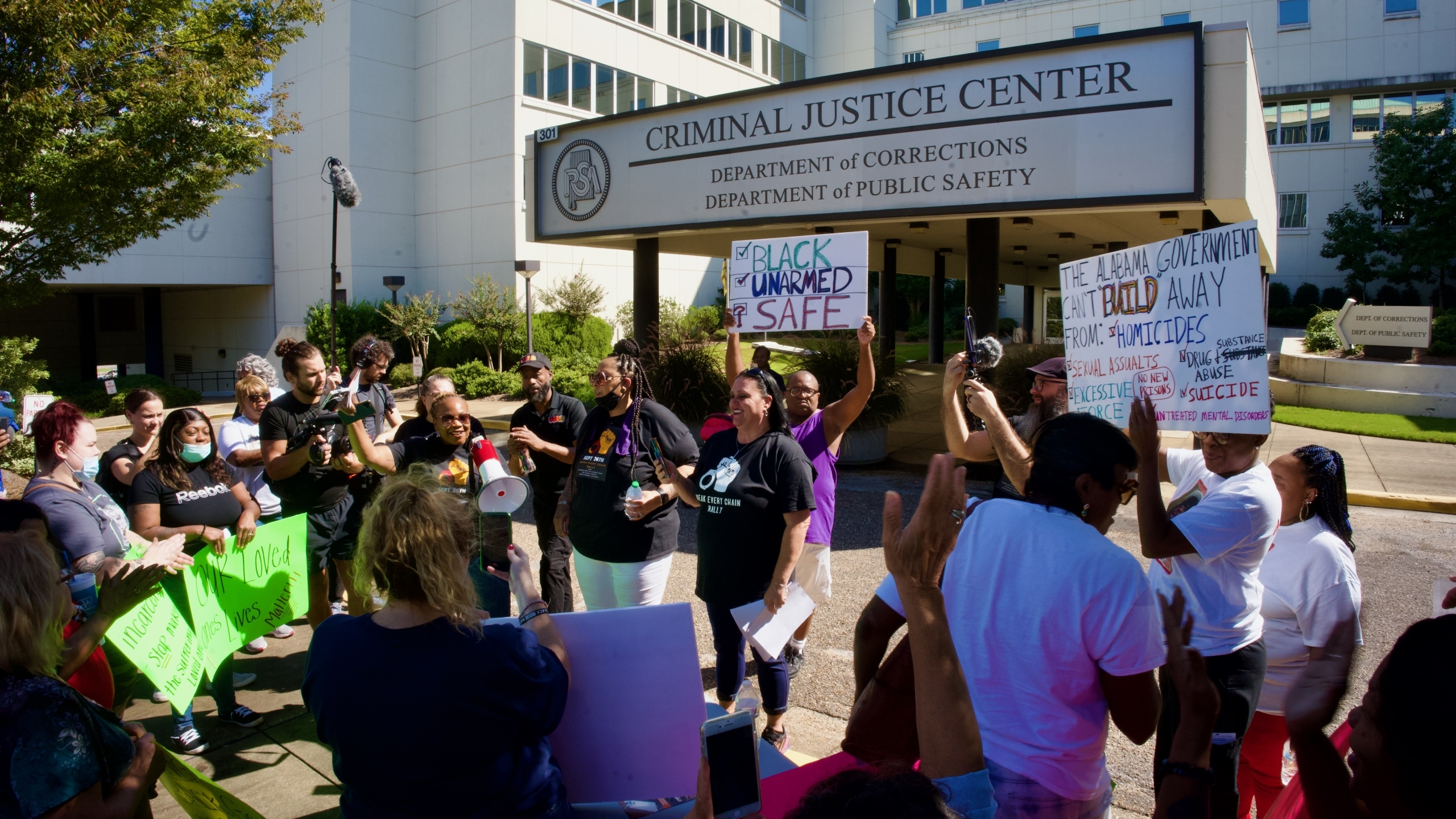 Incarcerated workers at all of Alabama’s major correctional facilities have begun a general strike and protest of conditions and legislation that organizers believe have created “a humanitarian crisis” within the state prison system, according to sources within the correctional system and the Alabama Department of Corrections.

Last week, sources within the Alabama correctional system told APR that the strike and peaceful protest would begin on Sept. 26. An additional protest of non-incarcerated individuals, many with friends and family in state prison facilities, occurred concurrently with the strike inside.

Demands include a repeal of the habitual offender act, an end to life without parole, a reduction of the 30-year minimum for juvenile offenders down to 15 years before parole eligibility, and a more streamlined review process for medical furloughs and elderly incarcerated individuals.

Additional demands include presumptive sentencing standards be made retroactive for all incarcerated individuals, a repeal of the drive-by shooting statute, and the creation of a statewide conviction integrity unit.

“This crisis has occurred as a result of antiquated sentencing laws that led to overcrowding, numerous deaths, severe physical injury, as well as mental anguish to incarcerated individuals,” organizers said in a letter of demands delivered to the ADOC main office in Montgomery by outside organizers on Monday. “This humanitarian crisis led to the Department of Justice filing suit against Kay Ivey and the ADOC. Yet, nothing has changed or gotten better, only worse.”

A spokesperson for the Alabama Department of Corrections confirmed on Monday that there have been reports of worker stoppages “at all major Correctional Facilities in the state.”

“Controlled movement and other security measures have been deployed,” the spokesperson said, adding that the ADOC does not comment “on security procedures due to the safety of the inmates, our staff, and the public.”

ADOC Commissioner John Hamm said in a statement on Monday that “all facilities are operational and there have been no disruption of critical services.”

Incarcerated workers provide the majority of essential services to correctional facilities, from working as cooks and servers in prison kitchens, as runners, as maintenance and upkeep services workers, as well as production of furniture, clothing, and license plates that are mostly sent outside of the prison system.

Even if correctional staffing was not severely depleted, as it has been over the past several years, paid employees in the state correctional system simply could not perform all the necessary tasks that allow state prisons to operate fully, making incarcerated labor an essential component of basic functions for prisons.

According to sources within the Alabama correctional system, all rehabilitation and education programs have halted, with privileges like wall phones and television being taken away or shut down entirely. Tablets that incarcerated individuals use to communicate with family, friends and legal representation outside of prisons have also been taken away in at least one facility.

xDay one breakfast at Bibb Correctional facility.
I think we get thirty (30) days of this out they ass.#freealabama #BreakEveryChain
This is they're breaking tactic stay strong and persevere.
This is the modern day Pharaoh…Let My People Go"#ShutDownADOC2022 pic.twitter.com/Npl3zz0htE

In Limestone County, meals prepared by individuals at a work release center in Decatur are being shipped into Limestone Correctional Facility, where workers are on strike, according to a source within the state correctional system.

Several posts shared by families of incarnated individuals show photos and describe substandard meals being served to incarcerated individuals, with multiple showing individuals only receiving bread and peanut butter as a meal.

Human rights under attack in the Alabama prison system.#ShutDownADOC2022 pic.twitter.com/TFHdihk1fl

At least one individual in the Limestone correctional facility has yet to receive medication for a life-threatening illness, according to a source familiar with the incarcerated individual.

As of June, the month-end population systemwide for the ADOC was 19,992 incarcerated individuals, which includes individuals within maximum security facilities to individuals at work-release centers statewide.

In a statement released on Monday, Communications Director for the Alabama Governor’s Office Gina Maiola described the demands “unreasonable” and said that they would “flat out not be welcomed” in the state.

“Governor Ivey is, first and foremost, committed to ensuring public safety, plain and simple,” Maiola said. “These “demands” – as the protestors refer to them – are unreasonable and would flat out not be welcomed in Alabama. It is also important for these protestors to understand that a lot of their demands would require legislation, not unilateral action. Some of these demands suggest that criminals like murderers and serial child sex offenders can walk the streets, and I can tell you that will never happen in the state of Alabama where we will always prioritize the safety of our citizens.”

In addition, Maiola said that Ivey appreciates the work of the correctional staff, describing them as “the boots on the ground,” and pointed forward to the future construction of new prison facilities that were approved by the state legislature ast year.

“Governor Ivey appreciates the work of the correctional staff – the boots on the ground – who come to work each day to serve the people of Alabama by keeping our inmates and the public safe,” Maiola said. “Thanks to the Alabama Legislature, we can also look forward to the construction of new prison facilities that will create all-around better conditions to live, work and rehabilitate. There has been no governor more focused on improving the state’s corrections system and bolstering public safety than Governor Ivey.”