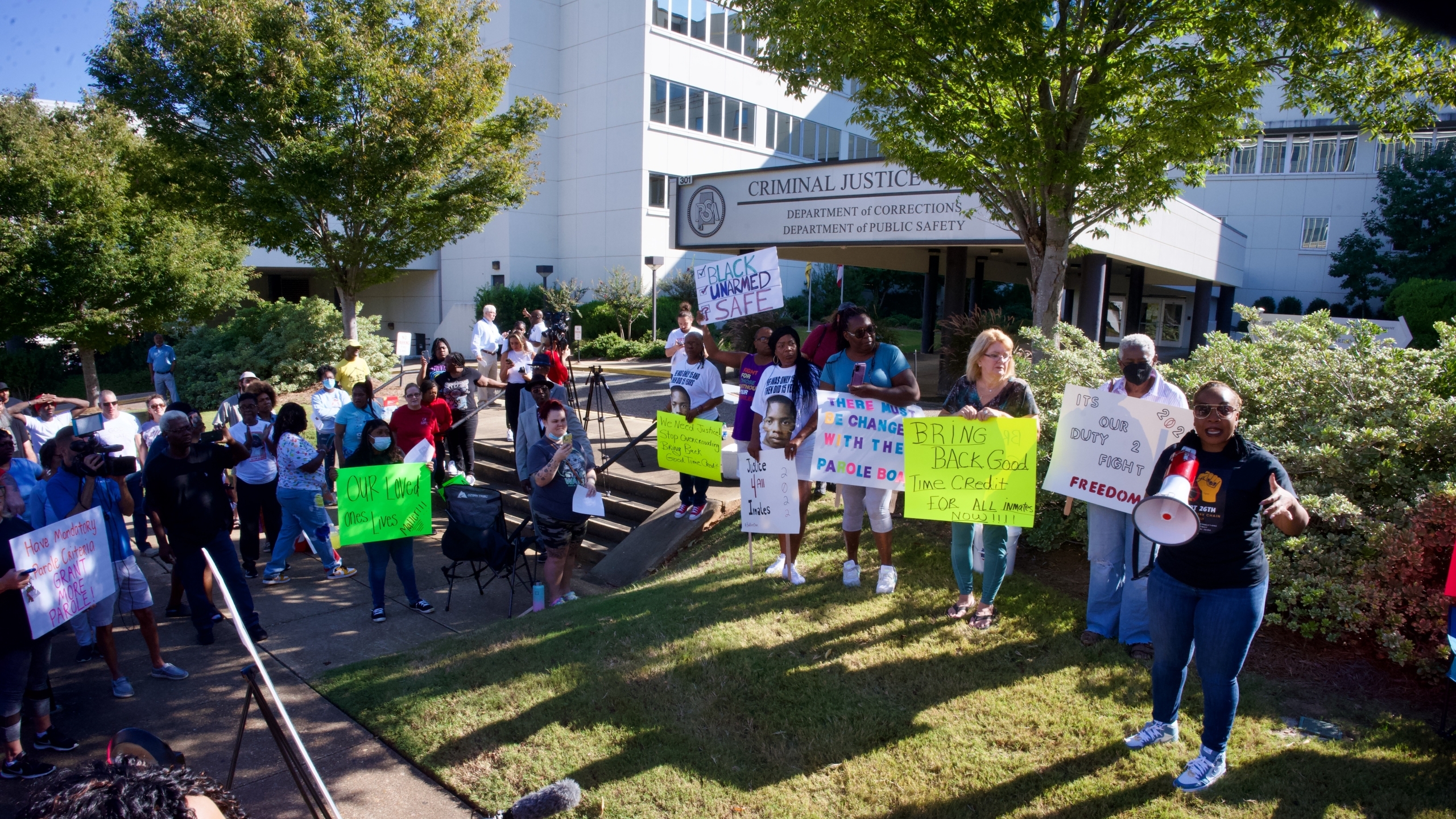 Protesters during the "Break Every Chain" rally outside the Alabama Department of Corrections' headquarters in Montgomery JOHN H. GLENN/APR

Families and friends of incarcerated individuals protested outside of the Alabama Department of Correction headquarters on Ripley Street in downtown Montgomery on Monday.

The Break Every Chain Rally occurred at the same time as incarcerated workers at all of Alabama’s major correctional facilities entered into a general strike over prison conditions and legislation that organizers said has created a humanitarian crisis within the prisons. Organizers of the protest hand-delivered a list of demands to the front desk of the ADOC headquarters, having to leave it on the counter as no one would come forward to collect it for the ADOC.

“We have to band together as family members,” said Diyawn Caldwell, one of the two primary organizers. “the only way that we are going to get our people out is to get laws changed.”

In an interview on Monday, Horvat read a message from an incarnated individual striking in one of Alabama’s correctional facilities.

“They’re apps off of our tablets so that we cannot communicate with family and friends,” Horvat said, quoting an individual in Limestone Correctional Facility. “They’re trying to create a hostile environment in hopes of getting these guys to act out.”

After Horvat began organizing the protest, Her husband was moved into solitary confinement in apparent retaliation for her efforts outside of the correctional system.

“I’m hoping that they will be objective and open-minded, and we’re really not looking for the ADOC to do anything but their job and treat our people humanely,” Caldwell said in an interview on Monday. “We’re looking for the legislators to come and sit down with us and overlook our demands and come to an agreement with us that’s going to work for both parties.”

A large swath of the demands laid forward by organizers deal directly with changing or repealing “antiquated sentencing laws” that protesters and incarcerated individuals argue have directly led to “overcrowding, numerous deaths, severe physical injury, as well as mental anguish to incarnated individuals,” according to the list of demands submitted with the ADOC.

Caldwell said that she had contacted the office of U.S. Senator Tommy Tuberville, R-Alabama; state Rep. Chris England, D-Tuscaloosa; and state Senate Minority Leader Bobby Singleton, D-Greensboro, with only Tubbersville’s office having replied to organizers, who wished organizers well but did not indicate he would support their efforts, according to Caldwell.

Eric Buchannon, a formerly incarnated individual with a brother imprisoned in the Alabama correctional system, read the list of demands to the crowd of around 50 that gathered outside ADOC’s headquarters.

“We believe if these demands are put in place, that we will see a different result from what we have been seeing in the Department of Corrupt–because it is corrupt,” Buchannon said. “Right now, all we have is a governor whose mind and heart are set on building new prisons, only to hold men who are elderly, who have mental health issues. They are dying in there.”

The list of demands submitted to the ADOC includes:

One of the laws singled out by organizers of the rally includes the Habitual Felony Offender Act, or simply the Habitual Offender Law, which allows individuals who have been found guilty of three felony convictions to be sentenced to life without the possibility of parole. The law has been criticized since its inception, as it does not separate between violent and non-violent felony charges, allowing for individuals who participated in relativity minor crimes to be sentenced to life in prison.

Buchannon argued that repealing the law would also alleviate the systemic overcrowding expressed at every major correctional facility in the state.

“Why won’t you adopt something that will alleviate the overcrowding,” Buchannon said, referring to the proposed repeal of the Habitual Felony Offender Act. “Why doesn’t it make sense to them? Because it is all politically motivated. It is all surrounded by greed, which this state has been known for years. Greed off the backs of a slave trade called prison.”

A reduction of the 30-year minimum for juvenile offenders to 15 years before parole eligibility for those youth in juvenile dentition is also among those demands that protesters wanted to be changed.

“We locking up young men whose frontal lobes are not even fully developed,” Buchannon said. “We are sending children to prison, but we’ll send another child to rehab.”

In a statement released on Monday, the Alabama Governor’s Office described the demands as “unreasonable” and said that the revision to the law that the protesters are demanding would allow “criminals like murderers and serial child sex offenders.” to walk free from prison.

“I can tell you that will never happen in the state of Alabama, where we will always prioritize the safety of our citizens,” said Gina Maiola, communications director for Alabama Gov. Kay Ivey, in a statement released to APR on Monday evening. “Governor Ivey appreciates the work of the correctional staff – the boots on the ground – who come to work each day to serve the people of Alabama by keeping our inmates and the public safe. Thanks to the Alabama Legislature, we can also look forward to the construction of new prison facilities that will create all-around better conditions to live, work and rehabilitate. There has been no governor more focused on improving the state’s corrections system and bolstering public safety than Governor Ivey.”