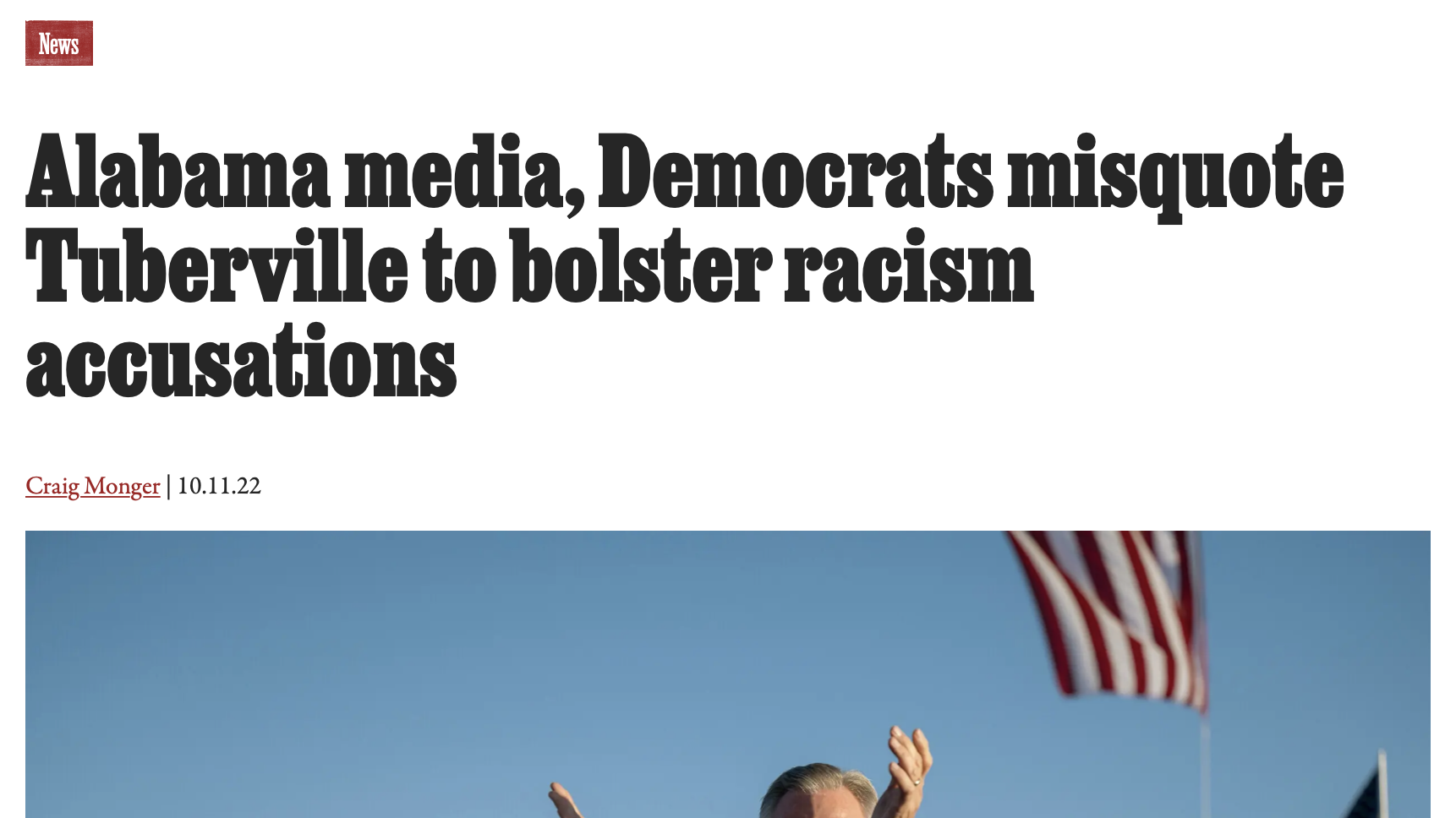 The headline of an 1819 News article charges that Alabama media outlets misquoted U.S. Sen. Tommy Tubberville to bolster claims he made a racist statement.

We’re going on four days now since U.S. Sen Tommy Tuberville, R-Alabama, made comments at a rally stating Democrats want “reparation” because they “think the people who do the crime are owed that.”

Media outlets in Alabama, including APR, and across the country reported the comments, noting the racial connotations that Tuberville seems to be making.

Tuberville himself has remained silent on the issue so far, but a couple of conservative news outlets in Alabama have apparently taken it upon themselves to correct the record.

Craig Monger of 1819 News and Dale Jackson of the Yellowhammer News argue that Tuberville was misquoted, and their argument is valid— to an extent.

Most publications, including APR, quoted Tuberville as saying “reparations” with an “s,” as opposed to “reparation,” sans “s.”

This difference, Monger argues, is that “while a seemingly innocuous addition, the single letter lends a mouthful of intent to Tuberville’s words.”

But as Monger himself points out in explaining his perceived differences between the two words, “In standard political speech, the word ‘reparations’ refers to the redistribution of wealth to descendants of slaves.”

Which explains why my colleague John Glenn and reporters across the state and nation all used the term “reparations” as the words, in the context of Tuberville’s statement in a political speech, appear interchangeable.

In contrast to the plural, Monger defines the singular “reparation” as “the making of amends for a wrong one has done, by paying money to or otherwise helping those who have been wronged.”

So in the political speech that Tuberville was making, what would that be referring to exactly?

Without a convincing alternative explanation from Tuberville, what else would a reasonable person take away from his statement?

In April 2021, the Democrats of the U.S. House of Representatives House Judiciary Committee advanced a bill to begin pursuing reparations, with no support from Republicans.

Monger and Jackson in their criticisms provide no alternate explanation for Tuberville’s comments, only offering a meaningless distinction between the two words.

So did we, and others, misquote Tuberville? Sure, but to borrow from Shakespeare, whether there’s an “s” or no “s” is much ado about nothing.

The intent of Tuberville’s phrase is clear: “They (Democrats) want (reparations) because they think the people who do the crime (Black people) are owed that.”

And can we address the elephant in the room here? While there appear to be few elected officials willing to emphatically echo Tuberville’s sentiment, we’ve heard this kind of rhetoric among a segment of the voter base time and time again, adding another lens by which to accurately interpret Tuberville’s comments.

If Tuberville wants to clarify his comments, he is free to do so, and each person can judge for themselves the intent of his words.

But the only Alabama media mischaracterizing his speech today are the Conservative outlets who come across more like lawyers trying to get a client off on a technicality than journalists seeking fair and accurate reporting.