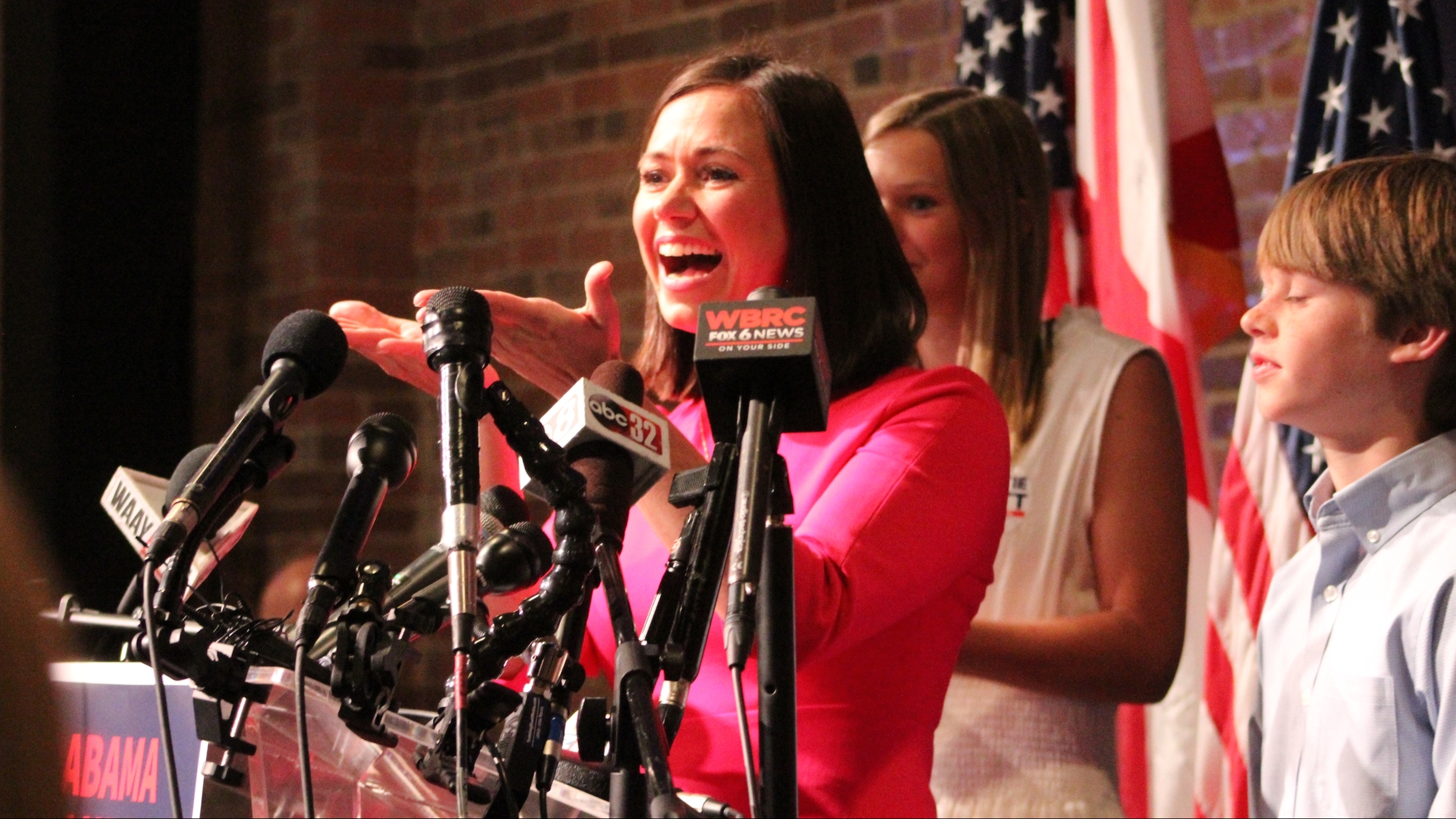 Katie Britt addresses a crowd at an election watch party on Tuesday, May 24, 2022. (Jacob Holmes / APR)

Katie Britt will be the next U.S. Senator to represent Alabama.

Britt has long been heavily favored for the seat after defeating Republican opponents Mike Durant and Mo Brooks in the Republican primaries.

The Associated Press called the race for Britt shortly after the polls closed Tuesday night and early numbers from the Alabama secretary of state’s website showed Britt with about two-thirds of the vote, more than twice that of Democrat Will Boyd. Libertarian John Sophocleus had only brought in 2 percent of the vote.

Britt will be the first Republican woman to represent Alabama in the U.S. Senate and one of the youngest senators ever elected in the state. She may also be the only female Republican Senator with school-aged children.

“I don’t take any of these things for granted and the gravity of all of it is not lost on me,” Britt told supporters gathered at her election party in Montgomery. “I am humbled. I am honored and grateful. I want you to know I understand what a tremendous responsibility these milestones carry and I do not take that lightly.”

Britt, 40, will be taking up the seat left vacant by retiring Senator Richard Shelby, who Britt served as the chief of staff for many years.

“Thanks to the man, Richard Shelby … whose seat I will fill, but whose shoes will likely never fit,” Britt said. “Who gave me a shot 20 years ago, who was Alabama’s greatest statesman and who has left a legacy, a lasting one, of fighting for this nation and an imprint on this state that will always remain.”

Starting out polling at 2 percent, Britt painted her victory as proof that “the American Dream is alive.”

As Senator-elect, Britt listed her priorities as she prepares to take office.

“I am going to look at things staring us in the face, whether it is inflation or crime, the border crisis, the opioid epidemic, making sure that we expand mental health and that people have access to high speed internet,” Britt said. “I am going to ensure that our veterans get America’s best because there is no doubt they gave us theirs. I am going to respect and help our courageous law enforcement officers to keep our communities and our families safe. I am going to be a champion for hard-working farmers because I believe that food security is national security.

“And I am always going to fight for our children. I believe with all of my heart that every single child, regardless of their zip code deserves an opportunity for the American dream. And I will never stop working and so that’s a reality.”

“Serving the people of Alabama is nothing new for Katie, and I know she will do a great job in Washington representing her state and preserving the values that make Alabama great,” Scott said. “I look forward to serving alongside Katie in the Senate.”