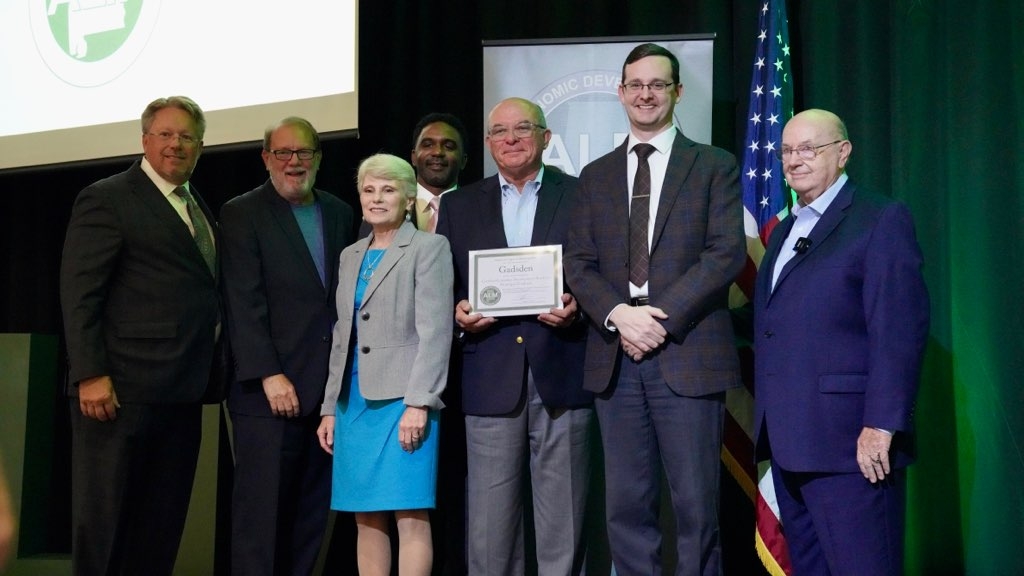 Nearly 130 municipal officials from across Alabama who committed time to studying how to strengthen economic development in their communities graduated from the inaugural Alabama League of Municipalities (ALM) Economic Development Academy (EDA) on Tuesday, November 8. A ceremony celebrating their completion was held during the League’s Municipal Leadership Institute at Perdido Beach Resort in Orange Beach.

The inaugural class consists of 129 municipal officials from across the state of Alabama and 27 communities. Each graduate was presented a certificate of municipal economic development from the League and the Alabama Community College System (ACCS).

Developed in conjunction with the Alabama Community College System (ACCS) and supported by an advisory council of industry leaders, the League’s EDA engages local leaders to help them better understand their critical role in the economic development process. The Academy is specifically designed to educate and engage municipal officials and designated community business leaders on best practices and strategies for successful economic and community development. Additionally, the Academy focuses on the role of elected officials regarding evaluating abatements, legal processes and implications, correctly marketing the community, gaging the community’s expectations, workforce development as well as other key aspects of the development process.

The Academy took place over a full year and consisted of an orientation and four one-day sessions that include community assignments, which were completed across 16 of Alabama’s 24 community and technical colleges. To graduate, participants had to complete an economic vitality survey of their communities, complete a community assessment/project, and attend all sessions.

“The more partnerships that you can have in a community, the better you are because more people are involved with helping move the community forward, and there’s not often a better partner with as far of a reach as Alabama’s community colleges,” said Neil Wade, consultant to the League. Wade facilitated the Academy across the state.

“The EDA  wasn’t superficial. It started at the core of communities – its local leaders – and deeply investigated their economic vitality and their capacity to strengthen their economic DNA. They determined what they needed to learn more about and how to leverage the resources to get where they want to be. It’s one of the most rewarding experiences I’ve had to watch local government at work in the academy to better their communities.”

Academy participants engaged with community college presidents across the state to learn more about how to collaborate on workforce and economic development in the future.

“Every single aspect of what we do as a community college system goes back to community – from the programs we create to the opportunities we build for every person in Alabama to be able to reach success through their local community college. The Economic Development Academy is an example of how working together with partners already within the community can yield great results,” said Jimmy H. Baker, Chancellor of the Alabama Community College System and commencement speaker for the graduation ceremonies. “I’m excited about what the future holds as the leaders in dozens of communities who participated in the Academy bring to life the projects they conceptualized during the training.”

Bryan Parker, Director of Governmental Affairs for the League, stated that the EDA  was a vision of League Executive Director Greg Cochran to enhance the focus on economic development for the 464 municipalities the League represents.

“We consistently ask our members what’s important to them, and most of the feedback we receive is focused on economic development. Through the EDA we created a team atmosphere for communities to focus in on the economic vitality, their strengths and weaknesses and how to use the resources in their communities, such as their community college, to garner maximum success,” Parker said.

“We appreciate the opportunity to work with the colleges on this project. It was great for municipalities to learn about all the colleges are doing in workforce and economic development.”

Graduates of the inaugural Economic Development Academy, along with the municipalities they represent, are listed below: