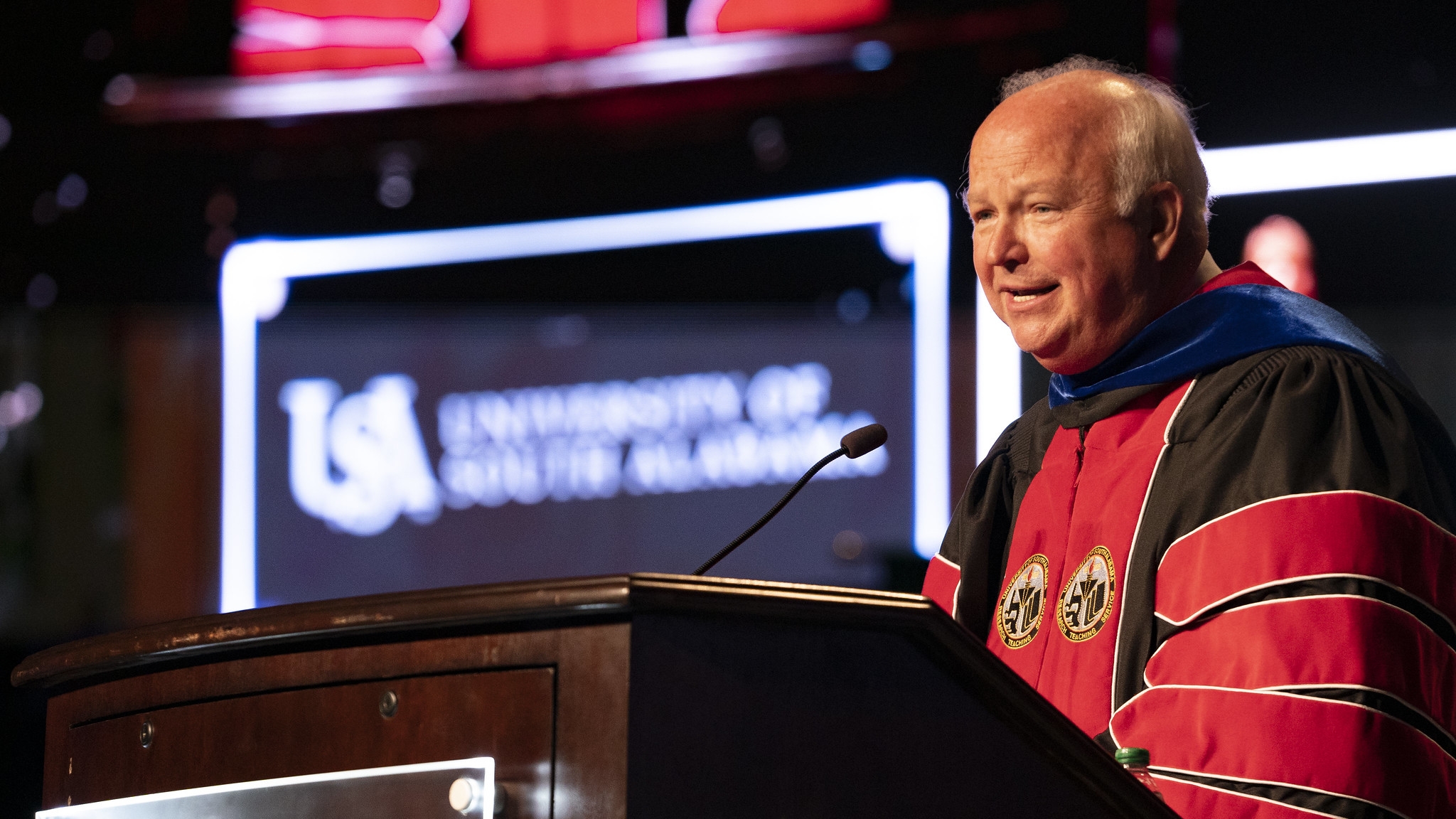 Former congressman and chief of staff to Gov. Kay Ivey, Jo Bonner, was inaugurated as president of the University of South Alabama.

Jo Bonner was officially sworn in as the fourth president of the University of South Alabama on September 23, 2022.

The University of South Alabama is the crown jewel and flagship of the Alabama Gulf Coast. It is a sprawling, manicured, beautiful and functional modern campus. It is currently the third largest university in the state.  Under the leadership of President Jo Bonner, it will grow and prosper to where within the next decade it will be thought of as one of our premier “Big Three” major flagship universities along with the University of Alabama and Auburn University.

The prosperity for USA is assured by the selection of Josiah R. Bonner, Jr. as President. Over the next decade, he will be thought of in the same terms and same breath as the legendary founding President of USA, Frederick Whiddon, who oversaw the first 35 years of USA.

There has never been a more perfect selection to be the leader of a major university in our state than the appointment of Jo Bonner as President of USA. His knowledge of the business,civic, and social community of the Mobile/Baldwin area is unique. Through his decade of service as their congressman, he is an integral part of the Mobile community.

He left Congress with the highest regard and admiration. He was so well respected by his congressional colleagues that he was Chairman of the U.S. House Ethics Committee. You can be assured that there is no university president, lobbyist, or board of trustee member who can walk the halls of Congress and bring home the bacon from the limitless federal trough than Josiah Bonner, Jr. You can also rest assured that there is no university president in the state that has the clout and reverence on Goat Hill in Montgomery than Josiah Bonner, Jr. This is a very unique and perfect blend for prosperity and growth for USA.

It is well known in political circles that Jo Bonner is Governor Kay Ivey’s closest confidante. He served as her Chief of Staff for four years. Their families go back as friends and relatives in Wilcox County for generations. Jo Bonner’s father, the first Josiah Bonner was Probate Judge of Wilcox County. Jo is the baby of the family, a good 15 years younger than his brother, Jim, who grew up as friends and in school together with Governor Kay Ivey. Jo’s sister, Judy, and Senator Jeff Sessions were in school together in grades K-12, then Jo came much later.

The aforementioned sister, Judy Bonner, was President of the University of Alabama. Never before in Alabama’s history has there been two siblings be president of major universities in Alabama.

Jo Bonner actually became President of USA in January. The official inaugural event was September 23. It was a magnificent program. Governor Ivey gave the keynote address. She beamed with pride as she talked about her “little brother” from Wilcox County.  Dr. Jack Hawkins the 30 year Chancellor of the Troy University System gave a brilliant address. He spoke for all of the university presidents in the state as the Dean of University Presidents.

Jo Bonner’s family was recognized, beginning with his sister, President Judy Bonner. His wife, Janee, along with his two outstanding children, son Robin and daughter Lee, were in attendance.

The Inaugural Event was held in the magnificent Mitchell Center. The Mitchell family have been major benefactors to USA. Mrs. Arlene Mitchell is Chairman of the Board of Trustees. Another Board of Trustees member is Dr. Steve Stokes, a radiology oncologist from Dothan. He and his wife Angela have been generous donors to USA, also. Stokes Hall is the newest dorm on campus.

It was truly fitting that Jo Bonner had a throng of political dignitaries attend his Inaugural Event. It was like a political gathering of Who’s Who in Alabama politics visiting on the floor of the Mitchell Center prior to Jo’s inauguration. The list of attendees is too long to enumerate.  However, in addition toGovernor Ivey was Mac McCutchen, John McMillan, John Merrill, Bobby Singleton, Vivian Figures, Young Boozer, Bill Poole, Twinkle Cavanaugh, Sandy Stimpson, Will and Liz Filmore, Cathy Randall, Gordon and Ellen Stone, Jim Purcell, Victor Gaston, Chip Brown, Margie Wilcox, Alan Baker, and Judge Sarah Stewart, just to name a few.