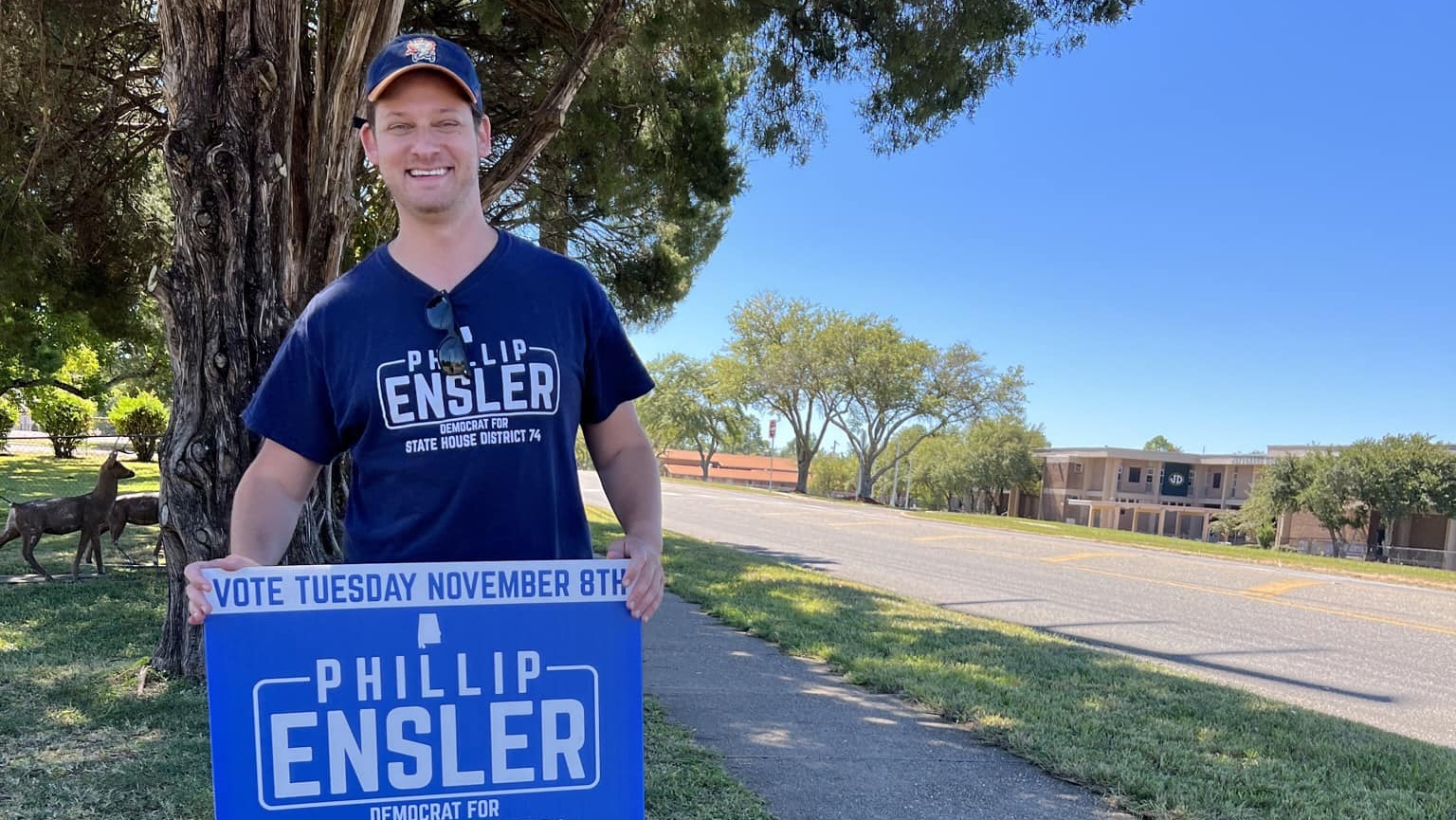 Then-candidate Phillip Ensler during his campaign for the Alabama state House.

Voters in state House District 74 did something on election day that hadn’t been done in the district since before the new millennium: They selected a Democrat over an incumbent Republican.

Phillip Ensler, the recently elected Democratic state House Representative for Montgomery’s District 74, was voted in by a wide margin against Republican incumbent Charlotte Meadows, gaining exactly 60 percent of the vote on election day.

“It’s always a big relief when you get the results and see that our message, focusing on solutions and working together as a community, resonated,” Ensler said in an interview with APR on Thursday.

Born in New York, Ensler originally came to Alabama as part of Teach for America, becoming a social studies teacher at Lee High School, now JAG High School, in Montgomery as part of the program. A member of the Alabama Bar, he has worked as a policy counsel for Alabama Appleseed and as Senior Policy Advisor for Montgomery Mayor Steven Reed. Most recently, he has served as executive director of the Jewish Federation of Central Alabama.

Ensler is the first Jewish man elected to the Alabama State Legislature since Democratic state Representative and later U.S. Congressmen Ben Erdreich over four decades before.

“My Jewish identity has shaped my worldview of trying to fight and advocate for a better community for everyone and a more equitable, just system for everyone,” Ensler said. “I think that’s the part that’s most exciting, just bringing those values into the state house. A lot of residents in the district are really motivated by that and inspired that there will be someone in the seat that represents their values.”

Residents in the district had been dissatisfied with Meadows, according to Ensler, with demographic shifts and a rare instance of a Democratic advantage after the redistricting process last year making it one of the few competitive districts for Democrats in the state.

“Hearing from residents that overall, [there was] just a general frustration and fatigue with politics and just people coming around when it’s election time and asking for their vote,” Ensler said. “Promising things and then kind of disappearing once they got in.”

Public safety and education are issues residents in District 74 want addressed during the upcoming legislative session, according to Ensler.

While he does not plan to pre-file any bills ahead of next year’s regular legislative session, Ensler said that he has “a lot of ideas” concerning public safety that he wants to take on, including incentives for police officers to live in low-income or high-crime areas, a legislative response to constitutional carry, and a pilot program to train and provide conflict resolution specialists to certain municipalities.

A “more rigorous kind of curriculum” on financial literacy in high schools and more practical instruction on economics to aid in the financial empowerment of youth in the state are priorities in educational policy that Ensler wants to address.

Ensler said that while he understands that there is common ground on issues “like pre-K and economic development and mental health” in the state house, he will not shy away from protecting marginalized groups in the state who continue to have their rights stripped from them.

“There have been attempts, efforts in the law few years that seek to demonize and attack marginalized groups in ways, restricting voting rights and really using different minority groups as scapegoats,” Ensler said. “I’m not going to shy away from standing up and fighting for what’s right for everyone, and fighting for everyone.”

The Alabama State Legislature is expected to begin its regular legislative session in March of next year.