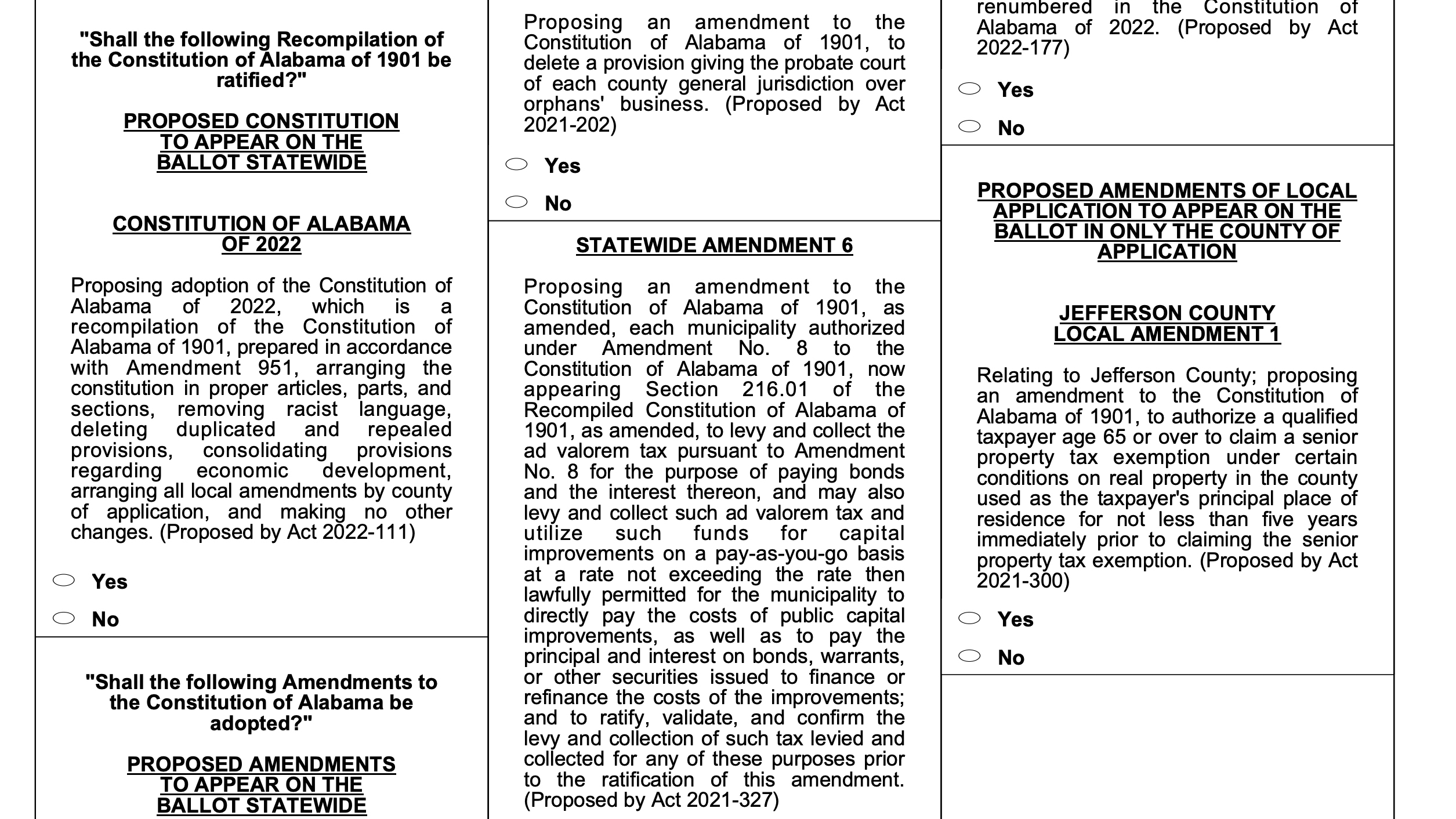 Alabama voters approved every single amendment on the ballot earlier this month, and those amendments are now in effect in Alabama.

“I am constantly proud to live in a democracy where citizens vote to let their voices be heard,” Gov. Kay Ivey said in a statement Monday. “Today, as we have certified our general election results, including the 10 statewide constitutional amendments and our streamlined state constitution, I would again like to thank the people of Alabama for coming out to the polls and casting their votes. I am also beyond grateful for their confidence and support. We have a lot of work left to do, but I am confident that Alabama’s best days are still ahead.”

The recompilation removed outdated and racist language that was already unenforceable, including school segregation and poll taxes.

The most widely discussed amendment was “Aniah’s Law,” which allows prosecutors to request a hearing to revoke bond for people charged with Class A felonies including kidnapping, first-degree burglary, armed robbery and others. The law is a response to the kidnapping and murder of 19-year-old Aniah Blanchard in Auburn, whose suspected killer was out on bond for such an offense at the time Blanchard was killed.

The law enjoyed broad bipartisan support, but a few critics including the SPLC voiced their concerns that the law could lead to innocent people kept in jail for years awaiting trial.

Amendment 2 expanded the authority of county and municipal governments to offer a thing of value to broadband companies to expand broadband infrastructure, as counties were stuck with federal Covid funds that couldn’t be used toward broadband. Two other amendments further clarified provisions regarding the recruitment of economic development for counties and municipalities.

Amendment 3 requires the family of victims to be notified before the governor commutes a death sentence to life imprisonment, with a failure to do so nullifying the commutation. The amendment is a response to Gov. Fob James commuting the death sentence of Judith Ann Neeley in 1999 without notifying the family of Neeley’s victim, Lisa Ann McMillan. James is the only governor to use the power in Alabama’s history.

Amendment 4 will require any bills that affect elections to have an effective date of at least six months before an election.

Amendments 8 and 9 bring two private sewer companies under the authority of the public service commission in response to concerns over unfair practices by the companies.