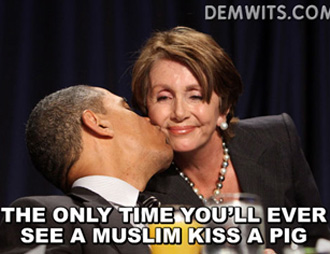 MONTGOMERY—There is no doubt that President Obama and Nancy Pelosi are not popular politicians with many Alabamians. However, an email circulated by State Representative Richard Laird, (I-Roanoke), to prominent legislators does not exactly meet the common standards of statesmanship.

The email contains a picture of President Obama kissing U.S. Congresswoman Nancy Pelosi, the caption reads, “The only time you’ll ever see a Muslim kiss a pig.”

The email was reportedly distributed to constituent in Laird’s district. One democratic staffer who did not want to be identified said, “If this is the type of trash Richard Laird spends his time emailing to his republican friends then I am glad he has left our party.”

Disrespect and off color comments have been a part of the dark side of our counties political landscape since its inception. Some will find the emailed picture from Laird humorous, others will not. It is perhaps a sad commentary on politics and our times.