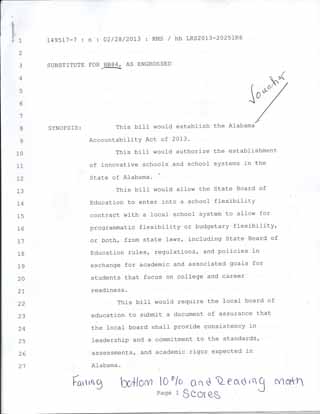 MONTGOMERY—Two versions of the School Accountability Act have surfaced over the last week. One was passed out of Conference Committee, and out of the Legislature, the other is now listed on the State Legislative website as a different version.
On Thursday, February 28, the Joint Conference Committee met to work out the details of a compromise between the House and Senate on HB84. However, when Republican Legislators returned to the committee after a recess they introduces at substantially different bill call The School Accountability Act of 2013.
Within seconds after the Conference Committee dismissed we conducted a quick interviewed with Representative Laura Hall (D-Huntsville). At the end of the interview Representative Hall gave us her copy of the new bill. Hall said, “The copy I gave to your intern is the copy I received once the committee reconvened with a substitute.” The copy included notes that she had made on the bill during the Conference Committee, see doc. The number for, “Substitute for HB84, As Engrossed,” was 149517-7, the 7 means version 7 of the bill. The bill that we received in the press box on Thursday night before the Senate voted also read 149517-7. Republican Scott Beason (R-Gardendale), said that there were four or five copies on HB84 on his desk before the Senate vote. When interviewed for this story he verified that the copy he had taken home was indeed 149517-7. Another Republican who did not want to be mentioned in this article verified that his version of HB84 was  also 149517-7, which meant it was version 7. Both indicated that thought that version 7 was the bill they were voting on.
However, according to the Legislative site Alison the version that went of Conference Committee was version 8 and not 7 and the bill that passed was version 8.
There is only a one sentence difference in version 7, see doc, and version 8, see doc. It is on page 18 item 5. It reads, “Nothing in this act shall be construed too force any school, whether public or nonpublic, to enroll any student.” This had been a very important addition added by Representative Paul DeMarco (R-Homewood). Yet, in version 8, this sentence is omitted entirely. This one sentence is the only difference between the two version. The questions that arise are, “Could this potentially open the door for no lines of demarcation on which schools a child could attend?” “Could a child from a failing school in Jefferson County be denied access to a school in Hoover?”
The office of the President Pro Tem Del Marsh (R-Anniston) did not return our request for information about the bill. (Phillip Bryan, Chief of Staff for Marsh months ago said that the Alabama Political Reporter would be denied access to the Pro Tem’s office—because we wrote a story that exposed that Marsh solicited money from Indian gambling interests—and Bryan has keep good to his threat.)
According to Senator Quentin Ross (D-Montgomery), a member of the Conference Committee, “In the Conference Committee, the bill that we had basically gave the chance for those districts that did not want to accept students a way out. That was version 7,” said Ross.
Ross said that he believes the legislative process was ignored by the Republican majority on the committee. “I don’t know where version 8 came from. The version that they had, the copy of the signatures from the Conference Committee was on version 7.”
No one seems to know why the bill was change or what happen from the time version 7 left the Conference Committee and version 8 was officially posted.
According to legal precedent set by the Alabama Supreme Court, the court will only consider what is in the official “jacket” of a bill. They will not look behind the veil at what might have been, according to a former Republican administrator, who once again did not want to be named. Many Republicans have spoken about some displeasure with the bill but few have been willing to come forward for fear of reprisal from Marsh and Speaker of the House Mike Hubbard (R-Auburn).
“So, in other words, people thought they were voting on 7 but 8 is actually what they put in to vote,” said Ross. “Version 8 didn’t go through any process because it wasn’t even in Conference Committee.”
Yet, the legislative website says 8 was the Conference Committee bill.
A flurry of phone calls were made by Marsh since Friday, according to people with knowledge of the calls. However, no one was willing to communicate the nature of the calls.
On this past Friday, Hubbard made statements to some in the press that there were changes that needed to be made to the School Accountability Act.
It is unclear at this time if there is any harm caused by the two versions of HB84. However, some have speculated that Representative Hall and Senator Ross, could file a Civil Rights suit in Federal Court, saying their voting rights where denied. If Hall and Ross voted on version 7 and yet version 8 was presented then there might be grounds for such a case.
“They passed 7, they slid 8 in there unbeknownst to anybody. Yet another version of another bill is what went through no process,” said Ross. “This isn’t a bill because we didn’t discuss it in Conference nor on the Floor.”
What started as a school flexibility act has become the story of the 2013 session. It has slowly gathered the name Flexigate.