For years, there have been numerous attempts to remove the STATE Sales Tax on Food. None of these efforts have been adopted by the Legislature. While we all agree that this is the most regressive tax we have, we have not been able to agree on how to recover the over $350,000,000 of revenue that will be lost from the Educational Trust Fund each year.

Most proposed plans in the past have pitted one element of our society against another, creating class warfare. We feel this is the major reason we have not joined our sister states of Florida, Georgia, and others in removing this regressive tax. Only Alabama and Mississippi continue to collect this regressive tax.

Taxing items of necessity is wrong. We removed the tax on prescription drugs in Alabama in the late 70’s. But it is now past time to remove the state sales tax on food as defined by the U.S. Government.

The bill, Senate Bill 279, would allow the removal of the state sales tax on food over a four year period. It will increase the general sales tax on all non-big box items by one fourth cent a year for four years to offset the $350,000,000 lost from the EFT. This will not pit one element of society against another. It will insure that the ETF will not lose funds (especially in this critical time) and allow us to join other states with no state sales tax on food. 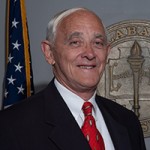